Thunder recap: OKC stumbles its way to a road win over the Sacramento Kings, 97-95

The Thunder got caught looking ahead to the Blazers game on Wednesday night, and it nearly cost them.

Share All sharing options for: Thunder recap: OKC stumbles its way to a road win over the Sacramento Kings, 97-95

The Oklahoma City Thunder defeated the Sacramento Kings 97-95 in the Thunder's first road game in two weeks. In a game governed by sporadic runs that made the final outcome close, the Thunder's last run was a little bit bigger than the Kings' and as a result, the Thunder were able to hold on despite playing shoddy basketball down the stretch.

What this box score tells me is that each team took turns playing crappy basketball, and that really isn't too far from the truth. The Thunder started the game cold, shooting 25% through most of the 1st quarter, while the Kings started hot from the floor. In the 2nd quarter, the Thunder used a late 17-5 run to turn a double-digit deficit into a halftime lead. In the words of Thunder commentator Brian Davis, "We've had the runs here, tonight!"

Things looked good for the Thunder in the 3rd, as they turned a tight game into a 13 point lead with a 14-0 run. The run continued into the 4th, right up until the Thunder seemed to decide that things were just about wrapped up and they could tag it and bag it, up 17.

Unfortunately there were still nearly 11 minutes to go in the game. Isaiah Thomas, the diminutive Kings guard, morphed into Allen Iverson and led a gallant comeback that had the Kings, who were missing their best player DeMarcus Cousins (ankle injury), and Thomas had his team with a shot to win or tie at the buzzer. Fortunately for the Thunder, Thomas' last gasp came up short and the Thunder walked out of the Sleep Train Arena with a win and a 13-3 record.

Ah, well...two general thoughts. The Thunder played this game like they were really excited to play the Portland Trail Blazers tomorrow night. In this week of basketball, there are two games that matter (Blazers, Pacers) and two that don't (Kings, Pelicans - sorry Anthony Davis fans). In the grand scheme of things, you can look at it one of two ways - a) every game matters, so a win against the Kings means the same thing as a win over the Blazers; or b) the big games matter more because they tell us more about where the Thunder are headed. While I tend to lean toward option b, I would counter my own argument with, if you can't focus for more than 24 minutes against a weak team, doesn't that say something as well?

In the end, my feelings can be best summed up by a life lesson from J. Walter Weatherman, who knows a thing or two about taking things seriously:

That's how quickly events can turn. One moment you're up 17, and in the next you've got a series of bad possessions and one missed call (Thomas' no-call against Westbrook with 49 seconds to go) and suddenly there is a prosthetic arm draped across the windshield.

The Thunder's last big run of the game, which spanned over the end of the 3rd and the beginning of the 4th, just about knocked out the Kings. The run put them up by 17 with the bench guys doing most of the damage. What this meant was that the starters were about to return and put the game away.

Right as I was about to sit back, pour a dram of Angel's Envy, and muse about the fine things in life, the Kings got a mini-burst of offense and shaved the lead down to 4 with 8 minutes to go. If not for 2 clutch 3's by Jeremy Lamb and Reggie Jackson (OKC's final points of the game; they did not score again over the remaining 2:25), the Thunder probably would have lost.

In other words, this is a game OKC almost lost, rather than won.

There is not always an easy stat to encapsulate a team not really interested in competing hard, but turnovers are a good place to start. While the Thunder have certainly had high turnover games in the past, sometimes they are a byproduct of aggressiveness and other times a byproduct of laziness. Tonight seemed to be one of the latter, even though the team as a whole had a modest 14 turnovers on the night.

The problem was that the Thunder's PG had half of those by himself, and a number of them were simply reckless. Westbrook never seemed to be zeroed in on the game at hand, and his lackadaisical approach underscores how critical that Westbrook's vitality is to OKC's emotional state. When he is checked out (which to be sure is very rare) the 1st team has very little direction and they sort of take turns trying to create something. There was no better example than when the Thunder had a 3 point lead and the ball at the end of the 2nd quarter and 16 seconds with which to work. Westbrook had just drilled a 3-pointer and he has found success hitting quarter-ending 3-pointers. With that in mind, Westbrook did not try to hid his intent, but noticeably shook off his teammates as the clock wound down and then launched a contested 25 foot shot that didn't come close.

Back to my initial point. This type of offense is lazy. I am not arguing that the players aren't working hard and trying to win, but rather lazy offense is a byproduct of a team that is not interested in doing all the little things right in an offensive set. From the quick passes to the solid weak-side screens to the sharp cuts, teams that put the work in BEFORE the ball actually moves into the kill position create a larger margin for error than the team that does not. The end result over the course of the game is the difference between shots at the rim and contested 19 footers.

Yeah, there were a few of those. 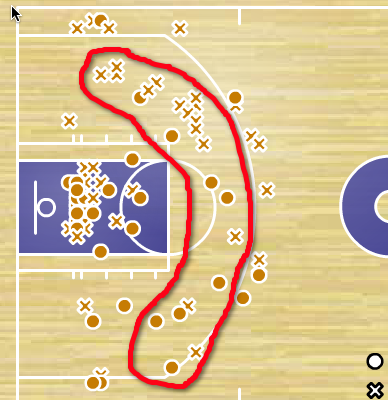 Of course the other note worth mentioning is that the entire Thunder offense was outscored by a 5'9" backup PG, 21-19. Good on Thomas, bad on everyone else.

Even though we know heading into every season, every single good team is going to have games like tonight's - the kind where they are looking ahead to the 'big' game instead of focusing on the task at hand. It is human nature, I suppose, which is why I can't put too much more stock into this game until I see how the Thunder come out against the Blazers tomorrow.

Human nature. It is a beast. At least human nature offers me the opportunity to pour another dram...

Next game: @ the Portland Trail Blazers on December 3rd at 9PM CDT