NBA Free Agency: Available free agents for the Thunder to sign in light of Westbrook injury

If the Thunder wanted to sign a free agent point guard to help alleviate the loss of Westbrook, there's a few options out there. None of them are great, unless you're into veterans, dudes that like to party or regressing French scorers.

Share All sharing options for: NBA Free Agency: Available free agents for the Thunder to sign in light of Westbrook injury

The story of last night's too-close-for-comfort game against the Bobcats (aside from the Russell Westbrook news) was how Reggie Jackson was shut down by Kemba Walker. The Thunder escaped with a 4-point win, but Jackson shot 4-of-19 for 10 points. It's bad enough when a player finishes a game with more shots than points, but Jackson nearly doubled his point total with his shot attempts.

Will it always be this bad? Probably not. The Bobcats have suddenly become one of the league's premier defensive teams, and Kemba Walker has made huge strides on that end. Give the Thunder some time too, and the offense will improve a bit as guys re-adjust to life without Westbrook. The earliest players could've found out about Westbrook's knee scope was after the game against the Knicks on Christmas Day, and I wouldn't be surprised if they found out later than that.

Ironically, it might be the second unit that suffers most from Westbrook's injury. Jackson looked bad last night, but Thunder fans know as well as anyone how capable he is even if his jumpshot is suspect. On the other hand, Derek Fisher was thrust into 18 minutes as the now-backup point guard against the Bobcats, most of any player off the bench after Jeremy Lamb's 24 minutes.

I'm willing to bet the dropoff from Westbrook to Jackson in the starting lineup isn't quite as damaging as the one from Jackson to Fisher on the bench. Fisher had already been playing minutes 13.9 minutes off of the bench with Westbrook healthy, but this injury puts the ball into his hands a lot more. The Thunder liked to use Fisher in three-guard lineups featuring at least one of Westbrook or Jackson, but this is less of an option now and the Thunder had to turn to more traditional lineups. Predictably, Fisher struggled to man the point, a position he hasn't played particularly well in for two or three seasons at the least.

Zeb concluded as much in his analysis of the Westbrook-less Thunder. Fisher isn't a great playmaker, and even on those championship Lakers teams, he typically took a backseat to Kobe Bryant in terms of ball-handling. Zeb suggested starting Fisher and putting Jackson with the second unit (similar to the Sefolosha-Harden arrangement of the past), which sounds like a good idea but also an unlikely one at this point. Instead, the Thunder may look to sign a point guard. 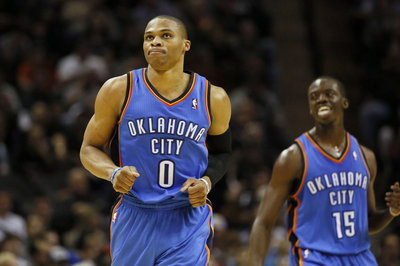 Might Scott Brooks shuffle the line-up to weather the storm?

The Thunder are $1.13 million below the salary cap now, enough to sign a player to a minimum contract with a cap hit of no more than $884,293 (players with less than two years of NBA experience will come a little cheaper). They can also waive the partially guaranteed deals of Hasheem Thabeet or Ryan Gomes to create additional cap space if they needed it (unlikely, but that option exists). Waiving Thabeet frees up $700,000, while waiving Gomes saves a little more than $800,000.

What kind of options are out there? What are the Thunder looking for? One figures the Thunder would look for a better playmaker than Fisher, which would free them up to use Fisher off the ball again. At the same time, given the three-point slump some of their shooters are mired in (Fisher and Sefolosha), someone who can shoot the three would also be nice for the Thunder's second unit. Let's look at some options.

The Thunder were interested in signing Telfair in the offseason, and it wouldn't be surprising at all for them to revisit him. He's fast and sees the floor well, making him an interesting fit with the Thunder's young guns. The three-point shot, something Telfair struggled with early in his career, has moved closer to league average in recent years and it should at least be an improvement on what Jackson or Fisher have offered so far. He's not much of a scoring threat, but he's fast enough to get in the lane and cause trouble from there. Telfair's playing in China right now for the Tianjin Ronggang.

Tinsley, who started a few games for the Utah Jazz this season before getting cut two weeks into the season, is one of the best pure passers available. While a good distributor (8.6 assists per 36 minutes last season), he's very limited after passing the ball. He's a non-threat from outside even worse than this season's Fisher, and at 35 years old, there's not very much upside to signing Tinsley. If the Thunder want to continue running pick-and-roll and horns stuff with their second unit, Tinsley might not be the ideal fit. There are ways to make this work, though.

Nobody would've guessed that after his 2009-10 season in which Beaubois demonstrated incredible scoring ability as a rookie, Roddy Buckets would be out of the league just three seasons later. He's declined rapidly since his first year, but one would like to think he still has upside and that the Thunder can find it. At his best, Beaubois can be a dynamic finisher at the rim and he's improved as a playmaker. If he can rediscover his solid shooting stroke from his rookie season (40.9% from three, but 29.3% since), he'd be an absolute steal. However, it's a long shot for him to actually pay off and it won't be happening right away for sure.

Morris spent some time with the Sixers this season before being waived, and the Memphis Grizzlies worked him out before deciding to sign Seth Curry. He can kind of shoot threes, but doesn't really shoot them anyways. Still, he's young, has good court vision and plays solid defense.

Here are a pair of veteran point guards that aren't particularly inspiring options, but could be serviceable. James spent a couple games with the Chicago Bulls this season and Dooling played for the Grizzlies in last season's playoffs, but neither were that great. Both can shoot the three well enough and make the right pass while keeping turnovers low, making them solid options. There's a chance James is still out with a knee injury.

Duhon can shoot threes and make okay passes sometimes, but I don't know if I could handle the Thunder having both Derek Fisher and Chris Duhon at the same time. He parties a lot.

I love Boobie Gibson and he can shoot threes really well, but he's not much better than Derek Fisher as a ball-handler. He parties a lot, and Instagrams it. (You don't want to get sucked into the Boobie Gibson Instagram rabbit hole.)

Ivey played for the Thunder from 2010 to 2012, and to my surprise, he's been hanging around in the NBA. He played for the Sixers last season and was a training camp invite for the Hawks this season. I can't imagine why the Thunder would want him other than he's already been with them before, but I suppose he's a decent defender.

As you can see, the free agent pool isn't great for teams in need of a point guard. I'd probably look at bringing Sebastian Telfair state-side first, but the dream scenario is signing Roddy Buckets and watching him kick ass like he did in '09-10. Well, a dude can dream. For now, just assume the Thunder will sign Mike James and keep him around for a few years to continue Derek Fisher's legacy in Oklahoma City.