The Thunder endured the beginning of their 2nd stretch without Westbrook. The Bobcats gave them all they could handle.

The Oklahoma City Thunder held on for a road win over the Charlotte Bobcats, 89-85. Overshadowing the Thunder's squeaker of a win over the sub-.500 Bobcats was the fact that earlier in the day the team announced that Russell Westbrook, the perennial all-star and heartbeat of the team, would be missing the next 26 games due to a 3rd surgery on his knee to repair a torn meniscus during last year's opening playoff round against the Rockets.

With Westbrook out, a road game against a feisty Bobcats team was no longer a ho-hum affair, but a critical first challenge for the Thunder now that they are without Westbrook for a 2nd time this season. Indeed, the game was close throughout, with OKC needing a big night from Kevin Durant to hold off the Cats. Charlotte too was playing without key players, as Michael Kidd-Gilchrist and Jeff Taylor. However, the Bobcats made a game of it late, trailing by only a point with 14 seconds to play and with a chance to win the game in their penultimate possession.

Without a doubt, the game will long be overshadowed by the news that Westbrook, who is coming off of a triple-double Christmas Day game, had to get his knee scoped for a 2nd time this year following the initial meniscus repair surgery. Suddenly a team that looked as if it was hell-bent on taking down all of the league's best only a week ago is plunged back into uncertainty. There is the uncertainty of how they will hold up with Westbrook out, but more importantly, there is the uncertainty as to whether Westbrook is never going to be able to return to full capacity this season.

With that in mind, the Thunder are going to have to do better than they looked in the initial two games of the season. The good news is, they are a better team than they were at the beginning of the season, even if the first game's returns are spotty.

At the beginning and the end, OKC still has Kevin Durant to do his thing each and every night, but the big worry is that when defenses start to corner him and pound on him, how will the team respond? It was a mixed bag:

- Reggie Jackson, an early consideration for 6th Man of the Year, struggled in the starting line-up once again, scoring only 10 points on 4-19 shooting. Things are different when you are going against the other team's best.

- Thabo Sefolosha performed like the veteran leader that he is. After struggling mightily through the first month of the season, Sefolosha has started to find his groove and on the night scored 12 points, including 3-5 from 3-point range. Performance from guys like Thabo are going to be crucial for the Thunder, as they need to have players who can make open shots in order to keep opposing defenses honest.

- Kendrick Perkins had a strange stat line. He finished with zero points and 10 rebounds. Usually Perk can find his way to the rim at least once per game, so for him to get nothing is surprising, but even more so, it was his first double-digit rebounding game of the season.

- Without Jackson leading the 2nd unit, the bench is going to struggle. They are slowing down from an attacking PG who can get shots for himself as well as his teammates like Lamb and Collison to Derek Fisher, who can't really get any kind of separation at all in this, his final year in the league. As a result, the bench went from scoring 35-40 points to 21 on 6-17 shooting.

- Serge Ibaka once again demonstrated how great of a shot creator Westbrook is. Ibaka's open looks are so fewer and far between without Russ sucking defenses away from him. His path to the rim is going to be greatly encumbered, and Serge is going to have to start developing better chemistry with Durant and Jackson.

One of the positives to take away from this game, and the big difference from the beginning of the season, is that the Thunder are now playing very good defense. Early on, the OKC defense was a sieve and their rotations a mess. Now, both the first and second units are finding their roles easier to fill, and it has led to a string of teams struggling from the floor.

Tonight, the Cats shot only 37.5% from the floor, 39.1% from the 3-point line, and the Thunder once again guarded the paint: 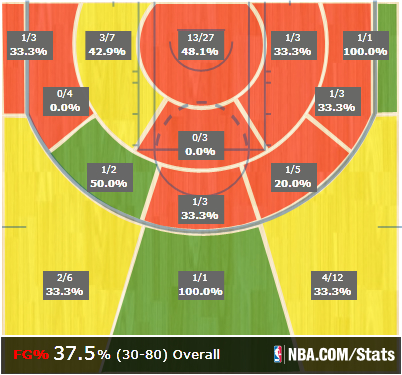 A team can go places when they can rely on defense like this, and now that OKC is playing consistently good defense, it mitigates the loss of Westbrook.

This game seemed like the type that could have led to Durant running out of gas down the stretch. He was playing heavy minutes, the team was on the road against a solid young defensive team, and Durant had very little help offensively.

Instead, Durant responded with 6-8 shooting for 14 points, including 2 step-back 3-pointers as well as a long 2-pointer that had to have made Larry Bird smile. Durant's 4th quarter was just enough, as OKC held onto the lead throughout. It was a special quarter for KD, because the truth is that the Thunder came within a missed Josh McRoberts three (and McRoberts now seems to bear a strong resemblance to a roadie from Motley Crue) of losing to the previously moribund Bobcats.

This game was simply prelude to what is now going to be a stomach-turning affair. On Sunday night, the Thunder welcome the Houston Rockets, the team that put the scare in OKC and the hurt in Westbrook. There is no doubt that the OKC fans will be out for blood when they see Patrick Beverly walk onto the court.

In the end though, what will propel the Thunder against the Rockets is what propelled them tonight - a stout defense, consistent veteran play, and some Durant 4th quarter electricity.

Next game: vs Houston Rockets on Sunday, Dec. 29 at 6PM CST