Various and sundry in the aftermath of the Christmas Day Knickerbocker annihilation.

I hope that you all had a blessed Christmas Day and are now dealing with the natural hangover that comes from the indulgence of food, festivities, and cheer. Here are some links to help you digest.

Once Carmelo Anthony was ruled out because of a sprained ankle, the Thunder’s keys to winning became getting off the bus, walking into the arena, putting on their uniforms, and then remembering how to basketball.

In fact, Deadspin has a screen grab that sums it all up pretty nicely: 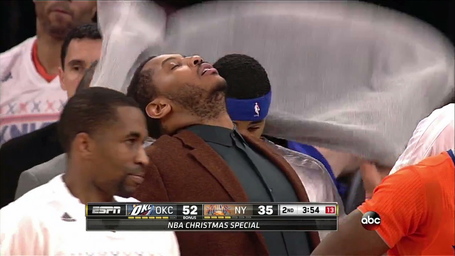 Little boy cries when he opens his Christmas gift of tickets to the Thunder vs Celtics. Talk about a Rorshach Test. This is kind of what I imagine Craig Brenner is like when he watches the Thunder and/or Archer.

Chris Mannix notes that the bench (ahem) has been surprising, not just to outsiders, but even to the Thunder players as well.

"I was confident [coming into the season]," Durant said. "Our guys worked hard all summer. A lot of guys stayed in OKC this summer to figure out the system or what their roles were going to be. They knew the hard work would produce results this season. Jeremy [Lamb], Reggie [Jackson], Steven [Adams], Perry [Jones], those guys did a great job all summer. We all felt confident that with our leadership we could help them out. Surprisingly, they are helping us out even more."

And here is Mike Woodson staring at his disaster of a Knicks team suffering the worst Christmas home loss in NBA history. 7 minutes of it, to be exact.

Sam Amick writes that Sam Presti could do a touchdown dance if Presti were the sort to do touchdown dances. It is kind of amazing, given: a) how far the team has been transformed over the first 2 months of play; and b) the fact that neither Durant nor Westbrook are even close to their optimal performance levels yet.

You're not gonna believe this, but the sleeved jersey experiment didn't go so well Christmas Day.

I think it's safe to say the v-neck t-shirt doesn't scream NBA athlete.

There was a bit of a tussle last night between the Warriors and Clippers. Whatever. Steph Curry in a sleeved jersey looks like he's floppy ears and footies away from being Ralphie from a Christmas Story.

Roy Hibbert, the massive center for the Pacers and leading contender for DPOY, took over ESPN's Twitter account. Thumbs up all around. I don't even know what this means but I highly approve.

The Indian in the Cupboard was loosely based off my life.

Finally, your moment of Zen. Yes, Amare Stoudemire now moves like a 50 year old man, but even so that was an impressive move by Reggie Jackson. Better Basketball, indeed.