The Thunder used a blistering 2nd quarter to build a lead that they would never relinquish, and now lead the Spurs in their regular season series, 2-0.

The Oklahoma City Thunder got their biggest road win of the season so far, knocking off the Spurs in San Antonio, 113-100. The Thunder used a dominant stretch of offensive basketball in the 2nd quarter, when they outscored the Spurs, 40-29. Although the lead dipped precariously low several times in the 2nd half, the Thunder never surrendered the lead and in the 4th quarter were able to put the game away. The game was marked by an incredible level of control by the Thunder, who even though they trailed early almost always looked like the quicker, more athletic, and more aggressive team.

The Thunder were led by Russell Westbrook, who continued to have a great December stretch by scoring a game-high 31 points on 13-22 shooting to go along with 8 assists and 4 rebounds. Leading the strong interior defensive effort was Serge Ibaka, who recorded another double-double in grabbing 14 rebounds to go along with his 14 points, and Serge protected the rim by recording 3 blocks and challenging countless others. Reggie Jackson came off the bench to record 21 points, 4 assists, and 3 rebounds.

The Spurs were led by Tony Parker, who finished with 23 points and 8 assists. Of particular note is the fact that Kawhi Leonard, one of the best wing defenders in the NBA, did not suit up tonight, which greatly hurt the Spurs' defensive effort.

Two major themes unfolded for me as I watched an impressive display by the Thunder in taking down one of the West's top teams.

1) The Thunder won convincingly despite a low-key night from Kevin Durant.

Durant is usually a quiet assassin, rolling up 30+ points within the flow of the game, often saving his biggest punches for the 4th quarter. This time out, Durant took nearly as many 3's (6) as non-3's (8) and had a stat line that is a tad bit unfamiliar to us whom expect to see eye popping numbers from him each night. The amazing thing is, it didn't really matter. Just like in their first game against the Spurs when Russell Westbrook scored only 6 points on 2-16 shooting, tonight's win was more about the Thunder as a team defeating the Spurs.

Much hullabaloo was made about Kawhi Leonard not being available tonight, and indeed that was big news because he is probably the last man on the planet left who can consistently check Durant 1-on-1. Fans were wondering if Durant might go for 50 with Leonard out. Surprisingly, Durant not only failed to get half of that total, but didn't even play that aggressive offensively. He picked his spots, knocked down some timely 3-pointers, finished some plays, and otherwise accumulated some hockey-assists (only 3 regular assists on the night).

With Westbrook struggling in game 1 and Durant playing a subdued game tonight, yet OKC winning in solid fashion both times, this trend really bodes well to how the Thunder as a team could match up against the Spurs when the playoffs arrive.

2) The Spurs have a serious guard problem when facing the Thunder.

The Thunder can roll out All-Star PG Westbrook, and on most nights he is going to be his hyper-aggressive/semi-reckless self that puts tremendous pressure on opposing defenses. Against the Spurs this time around, it appears as if Westbrook has finally started to figure out how dangerous he is at all times against San Antonio. He can go to any spot on the court he wants, take any shot he likes, and more often than not zip the pass he wants to the player that is open. Further compounding the problem for the Spurs is that they don't really have anyone who can press up against Westbrook and challenge him at the point of attack. If Westbrook wants to drive the ball down the lane, he can do that. If he wants to post up, there isn't anyone who is going to push back against him and redirect his efforts. While Parker can certainly match some of Westbrook's production, he certainly can't slow down Russ by himself.

And that's just the initial problem. What happens next is the two teams get into the second tier of their rotation and Reggie Jackson enters the game. Jackson finished with 21 points on 8-14 shooting including 2-4 from 3-point range, but these numbers don't do justice to how hopeless the Spurs defense looked against Jackson's forays to the rim. Just as Jackson did in game 1 where he scored a career-high 23 points, on this night he was the secondary difference maker after Westbrook in propelling the Thunder to a double-digit win. In these two games, Jackson has now scored 44 points on 18-28 shooting.

Here is the scary part - at the ends of games, Scott Brooks is now rolling out both of these guys on a consistent basis, and in this format the Spurs are going to be hopelessly lost. OKC can easily switch the PG duties back and forth between Westbrook and Jackson, which means that one of those guys is playing off the ball at all times. If the defense commits to aggressively trapping one or dutifully tracking the other, that leaves the world's greatest offensive weapon in Durant in single coverage, ready as needed.

It is truly a lethal combination of guard power, and I'm not sure how the Spurs solve it.

The 2nd quarter turned out to be the primary difference in the game. The Thunder entered the period tied, but were showing signs in the 1st quarter that they were ready to put together a run if they could maintain their concentration. Unsurprisingly, it was the Thunder bench that led the charge.

Starting when Jackson entered the game with under 3 minutes to play in the 1st, the Thunder went on a 21-12 run over the next nine minutes, opening up a 9 point lead. Jackson was the main impetus, but Jeremy Lamb, Steven Adams, Nick Collison, and Derek Fisher all contributed. In total, the bench contributed 44 points on the night, including 5-10 from 3-point range.

On top of the fact that the bench led the 2nd quarter surge, they also played a critical hand in the Thunder's protecting their 4th quarter lead. From Daily Thunder's recap:

With 10:22 left in the fourth quarter, the Spurs had trimmed a Thunder lead to three with six quick points to start the final frame. On the road against an elite team, it looked like the kind of moment where a visiting team would crumble.

But that's when Scott Brooks did something interesting. He took Kevin Durant out of the game...Brooks decided to trust his bench in a big moment of a big game. And they didn't just hang on to the lead. They re-extended it. Reggie Jackson started it with a steal and a dunk, then Jeremy Lamb canned a corner 3. Collison finished around the rim, set up by Lamb, and then Jackson hit a runner, set up by Lamb. Timeout Spurs, 7:24 left, Thunder up 94-86, and back in control of the game.

I feel like I can't stress that enough. Against the Spurs, a measuring bar game that the Thunder obviously really wanted to win, Brooks sat Durant down with the Spurs making a run, and relied on his bench to get things settled again. And they did it. That's big time.

The Thunder bench continues to be their secret weapon, and the Spurs just learned that it is something that has to be game-planned against.

The Thunder produced 113 points against a top-rated defense despite a) Durant, the NBA's scoring leader, producing only 17 points on the night; b) OKC only got to the FT line 18 times (around 8 fewer than average) and c)  OKC produced only 10 points on the fast break.

On top of that, the Thunder defended the Spurs' interior exceptionally well. While it may not look it given that the Spurs scored 40 points in the paint, take a look at their shot distribution: 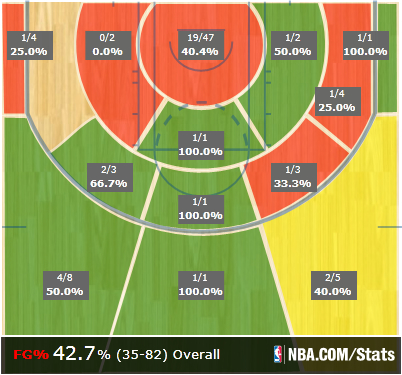 The Thunder, led by Serge Ibaka, protected the paint and kept Tim Duncan and company at bay. Early on, it appeared that OKC might be in trouble as Kendrick Perkins picked up 5 fouls in 15 minutes, but the Thunder did not waiver. Rookie Steven Adams played a big role in this regard, grabbing 6 rebounds and blocking 2 shots in 19 minutes of action.

Lastly, Steven Adams nearly rolled up another Kiwi tech, this time against Tiago Splitter. The man has a way with provocation of his foes.

The Thunder now lead the Spurs 2-0 in the regular season series. There are still two games to go so San Antonio could still tie the series and create an adverse playoff situation, but for now the big takeaway is how the Thunder have performed against the Spurs.

Even though both Westbrook and Durant have had off-nights, OKC has still won in convincing fashion, which will go a long way toward their confidence level. For the time being, OKC collects its 9th win in a row and next on the docket is the Raptors at home.

Next game: vs the Toronto Raptors on Sunday, Dec. 23 at 6PM CDT