The Thunder relied on stout defense and a conclusive 4th quarter run to put away Denver on the road. OKC has now won 7 games in a row.

The Oklahoma City Thunder defeated the Denver Nuggets Tuesday night, 105-93. In the second of their regular season match-ups, the Thunder did not need a 4th quarter comeback attempt to win this game, as they have in the past. Rather, OKC controlled the game for most of the contest and beat the Nuggets in each quarter on the night. The result was the Thunder notched their 7th win in a row and have almost matched last year's 21-4 start to the season.

The Thunder got a brief scare late in the game as former teammate Nate Robinson got hot from the floor and helped his team get to within 6 points. The Thunder answered with a response that is emblematic of a serious team that knows how to take business. They called a time out, called a snappy out of bounds play that saw Derek Fisher (4th quarter hero vs Denver once again!) fire a lightning quick pass to Kevin Durant, who caught and pivoted for an easy jump hook. This bucket ignited a 14-2 run that was punctuated by back-to-back 3's from Russell Westbrook and Jeremy Lamb. Up 18 with under 4 minutes to play, the Thunder simply had to do slightly better than they did against the Orlando Magic on Sunday night to come away with the double digit win.

The Thunder were led by Kevin Durant, who finished with 30 points, 6 rebounds, 3 assists, and 2 steals. His All-Star teammate Russell westbrook finished with a near quadruple-double, scoring 21 points while grabbing a team-high 13 rebounds and handing out 8 assists, but conjoined the assist total with a matching number of turnovers.

The Nuggets were led by J.J. Hickson, who finished with 20 points and 14 boards. Ty Lawson, long a thorn in OKC's side, was effective but not transcendent, finishing with 17 points and 13 assists.

This game lacked the traditional zoom-zoom that past Thunder-Nuggets games have had. In the past, these two teams have often played what I dub "defense-optional" affairs, where they take turns racing up and down the court and finishing plays. While such efforts have spawned some very cool memories, for the most part it is a bit frustrating to watch the Thunder switch off their defensive intensity in favor of a track race.

Tonight's game lacked the fireworks, but from a competitive standpoint, the effort is superior because OKC played solid on both ends of the court. In the first time out this year, the Thunder did not really make defensive stops until they had to in the 4th quarter. This time out, OKC had a much better concentrated focus and defensive game plan on how they were going to deal with Ty Lawson. Last year, the Thunder implemented a defensive strategy of protecting the paint by any means necessary and to then rely on athleticism to close out on shooters. The only way an opposing team could take advantage of this strategy was to be able to make quick perimeter passes and then sink 3-pointers. The Nuggets are not the kind of team that can create a lot of points from the perimeter, as they shot only 5-19 from beyond the arc.

What solid defense can do for a team as talented as the Thunder is remove a lot of the pressure that their star duo have to face when they feel like they have to score every time down the court. It gives a team margin for error. As we know, the Thunder play best when they can play aggressive, because this style of play takes advantage of Westbrook's primal mindset. As Anthony Slater notes, the result is a good one:

When the defense is playing good/great, it means that a game where Westbrook somehow tallies up 8 turnovers, it doesn't hurt the team materially. Despite all of those turnovers, there was very little time during the contest when the Thunder looked out of control. The primary reason why they had this cushion is because they greatly limited the Nuggets' biggest advantage from the past, their ability to score lots of points in the paint.

I'm borrowing the following screen shot from the Denver Stiffs, where we can see the opposite side of the same coin that they are lamenting tonight: 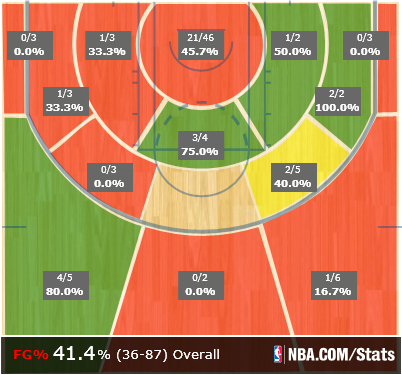 Denver had 46 shots at the rim, and they converted less than half of them. This was in major part because the Thunder have become a very good team at protecting the rim. As noted above, their defensive philosophy is to protect the lane and then recover. Tonight we saw how adept they can be at this strategy.

The great thing about it is that the method doesn't even require Serge Ibaka to block 10 shots a night. They simply have to be talking on defense, shifting into the right spots, and then not work themselves too far out of position or play too aggressively when they do not have additional help.

On the offensive end of the court, this is the first game in a while were it felt like the bench didn't have a great offensive game. Denver's bench has been one of the best for years now, particularly at the guard position. Because Reggie Jackson and Jeremy Lamb struggled from the floor (combined 8-19, 17 points), the bench did not have the same outstanding consistency that we've seen over the past two weeks. As a whole the bench mob did produce 32 points on the night, and this was enough to outscore the Denver bench, 32-27.

Even with the poor shooting outing, it was still great to see Jeremy Lamb on the court at the end of the game and hitting one of the big 3-pointers that helped put the game on ice. On top of that, Lamb continues to improve his rebounding ability, grabbing 6 from his SG position.

Lastly, we have to mention that once again Steven Adams managed to annoy another player enough to get him to throw a punch. This time it was Jordan Hamilton, and after Adams gave him a hip check, Hamilton took a swing and then took a walk to the bench.

The Thunder are playing at an exceptional level of play right now because they don't need to have an A+ game to beat good teams like the Nuggets. They can simply focus on their defense, let Durant/Westbrook/Ibaka to have normal offensive nights, and then entrust that they will be in a position to win.

Furthermore, this leaves another gear to crack into when the Thunder face the superior talent in the league, such as the Spurs this Saturday, or the Rockets and the Trail Blazers at the close of this year.

Next game: vs the Chicago Bulls on Thursday, Dec. 19 at 7PM CDT