Jeremy Lamb has performed about as well as anyone could've hoped for this season. We take a look at one of the Thunder's plays for him, the horns pindown.

Jeremy Lamb has played about as well as anyone could've hoped for so far in his first full season of action. He's averaging 17.0 points and 2.3 threes per 36 minutes on 48.7% shooting from the field and 41.1% from behind the arc. With Kevin Martin in Minnesota, Lamb has stepped into that three-point specialist role and performed admirably. 70.3% of his field goals have been assisted upon, including 93.3% of his threes.

The Thunder love to get Lamb in motion and free him up with off-ball screens. Screen plays account for 18.4% of Lamb's shots, per MySynergySports, and he's learned to read how to use screens very well. One of the screens the Thunder like to use with Lamb is a pindown screen set for him near the corner of the basket, and Lamb then curls up to the three-point line. There have been instances where they've set the pindown screen for him before the point guard has even brought the ball past half-court, leading to a shot made just seconds into the half-court offense.

One of the specific plays the Thunder utilize to get Lamb open is a horns pindown play where the play begins with a pass to one of two big men at the elbows. In most instances the Thunder run this play, it's usually in an all-bench lineup featuring Reggie Jackson, Derek Fisher, Nick Collison and Steven Adams alongside Lamb (though we've seen Perry Jones and Kevin Durant a few times in this play).

While both big men call for the ball, the play is designed for the ball to go to the one farther from Jeremy Lamb (typically Nick Collison). That allows for the Reggie Jackson pass-and-cut to the strong side, where he screens a path to the rim for Derek Fisher or another player in his spot. 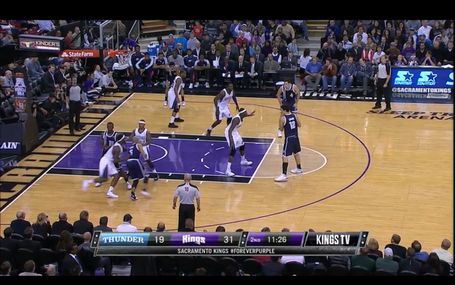 That's largely misdirection and Fisher will normally move back out of the paint after completing his cut. Why? It puts pressure on those defenders on the weakside (Lamb's defender), setting up the actual scoring play. Following a dribble hand-off from the big with the ball back to the original ball-handler, we get a pindown screen for Lamb on the weakside. If the defender is a step behind from being distracted by the strong-side screen, he'll be hard-pressed to fight over the pindown screen set on him. Either way, Lamb can pick up a good look for a jumper most times. 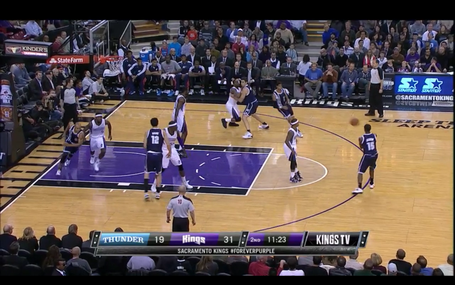 This play also leaves the big men in good position to jostle for an offensive rebound. Steven Adams is able to tip it up a couple of times in this situation against the Kings, before he's forced to try and save it from going out of bounds and throws it to DeMarcus Cousins.

The nice thing about this play is that if it breaks down, there are multiple secondary options available. For example, it can become a pseudo-pick-and-roll for Lamb and the pindown screener, with the screener rolling after Lamb's catch and the defense reacting to the open shot. If the pindown screen is well-defended, it can become a pick-and-roll between Jackson and his screener. Sometimes you'll see one more pindown screen set for the misdirection cutter to come back out. In the video at the beginning, you saw this  second pindown screen (although it went unused) for Kevin Durant against the Clippers.

Running this play to the other side, using Lamb as misdirection, works as well. Sometimes the Thunder will pass to Lamb's side and run the play to get, say, Derek Fisher open. The beauty of horns is that the point guard can choose which side he wants to pass to, and if one big man is being pressured, he can pass to the other to run the same play.

With this Thunder team featuring one of the deeper rosters the Thunder have had in a while, it's nice to see the Thunder can take Durant or Westbrook off the court and utilize the rest of their team to score. The Thunder are relying upon a bunch of young guys, like Lamb, off of their bench. Making use of them in the offense now will be a good thing for this team in the long run. And, the way Lamb is playing right now, there's no doubting that he's a legitimate scoring option to create plays for in relief of the Thunder headliners.