Time to hand out some hardware for the week that was for the boys from Loud City and the rest of the NBA.

Share All sharing options for: Beyond The Arc: Thunder Weekly Awards For Oct. 30th - November 5th

And here we go...We are back for another installment of the Beyond The Arc weekly awards. I know you missed it so dearly. Things are going to be a little more free following on this years edition of Beyond The Arc. Mainly meaning that I am not always going to include the staples that were seen last season like team MVP and best supporting player for the week and etc. If a truly note worthy performance happens it will get noticed. I am going to keep the Walter White Empire Scale Thunder ranking because even though Breaking Bad is dead and off the air my love for the show is not dead at all. Plus I think it is a great way to get a pulse check on where the team is at that particular moment in the season. So, with that being said now we can dive right in to this season premiere of Beyond The Arc.

"Don't Know What You Got Until It's Gone Award" - Russell Westbrook

Remember when people thought that Westbrook shot too much and sometimes hurt the time with his shot selection and inability to pass to Kevin Durant? That was cute. It was a great sight to see Westbrook out there on the court and playing the way we have grown accustomed to seeing. Fast and fearless. There is still some rust for Westbrook to work off. Some of the jumpers were hitting front rim and he missed some relatively easy shots around the rim he usually makes but damn it was nice to see him back out there.

Thankfully that experience is now something of the past. Jackson is a fine player and would be a decent starting point guard on one of the lesser teams in the league but on the Thunder his limitations really showed. The Thunder's offensive was extremely stagnate at times. He did not help matters by only making 13 of the 32 shots he has attempted this season.

Benedict Cumberbatch Is Awesome Even As Chewbacca Award - fans who lost their mind when Westbrook stepped on the court.

However I am pretty pissed he didn't ride his unicorn into the area. 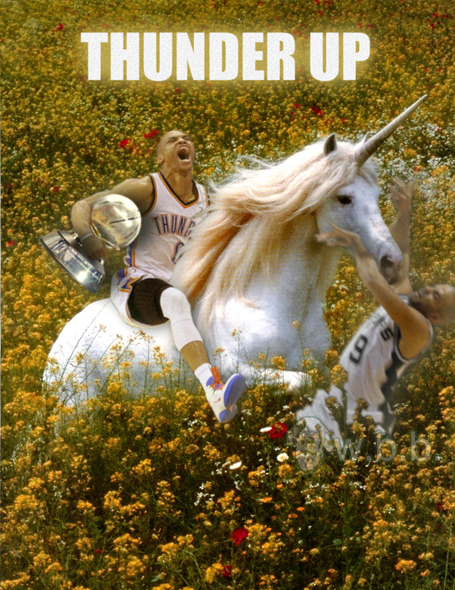 By the way if you are one of the poor souls who is unaware of the awesomeness of Benedict Cumberbatch I beg you to click the hyperlink above or click on this link or even this one.

Okay...so here is a little explaination for the title of this award. Remember when people wondered what it would be like when Miley Cyrus grew up and started becoming more of a sex symbol and they were curious what that would look like? It is something that sounded better in theory than in actual execution because now we are dealing with the twerking and sticking out her tongue and disgracing Jordan version of Miley. To me that is what the first 3 games of the season were for Serge Ibaka's offensive game. I mean...in theory the idea of Ibaka being the second offensive option for the Thunder sounded interesting and possible positive at the time. Then we had to actually watch it and we remembered why we love Russell Westbrook and his shot selection so much.

I mean clearly he went through Westbrook's closet without Russ' knowledge and got to the section labeled, "Too crazy even for me to wear" and picked that jacket out. I can't stop looking at it though. It is just so hypnotizing.

Seriously...someone better call Kenny Loggins because K-Love is in the DANGER ZONE!!!

I see you there Spike.

In the first week of the NBA season the Thunder have a me mildly concerned. Yes, they had to play two of the three games without Russell Westbrook and that is why the offense suffered as it did. But here it my main concern about that. It isn't like they found out that Westbrook was going to miss some time. They knew this was going to be the case since his injury last summer. The offense looked totally out of sync and one dimensional vs. the Jazz and the T-Wolves. It became the stand around and wait for Kevin Durant to do something show co-starring taking and missing unnecessary threes. Even upon Westbrook's return the team had trouble with a Suns team many expect to be a bottom feeder and picking at the top of the lottery.

The defense did not do a lot to help out the offense either. Alec Burks carved up the team in the second half of the opener and the Thunder followed that up by getting embarrassed by former teammate Kevin Martin and the previously mentioned T-Wolves. There were some silver linings from the first week of the season for the Thunder. I am very happy to see Perry Jones III and Jeremy Lamb getting significant minutes. The Lamb part was expected but not so much with PJ3. This team needs a spark off the bench and I am going to go out on a limb and say that Derek Fisher isn't that spark.