Russell Westbrook hit the game winner 3-pointer in overtime to put the Thunder over the Warriors.

"It's been a long time coming." - Kevin Durant

Westbrook has seen a number of his own game-winning efforts go to waste over the past two years. He has gone from a guy whom fans have actually gotten angry as he has seemingly taken away clutch shot attempts from Durant to a guy who has become dependable taking big shots in big moments. The problem was, circumstances outside of himself kept robbing him of the final moment. Look no further than game 1 of the Thunder vs Warriors this season, when Westbrook's deep 3-pointer would have sealed the game but for Andre Iguodala hitting a buzzer beater less than 3 game seconds later. It has been a long time coming, and the moment is finally Russell's.

Oh, yeah...there was a game. The Thunder defeated the Warriors last night, 113-112 in overtime. This game did not feature the same fireworks on offense as the first outing, as both teams displayed better defense and less prolific shooting. Westbrook and Durant combined to shoot 17-47 for 59 points. Their output fas far less effective than the Warriors' star scorers, where Stephen Curry and Harrison Barnes combined to score 58 on 23-41 shooting. In fact, it was amazing that the Thunder were even in this game with their stars struggling, since they did not get the same bench production as they did against the Spurs.

After playing a very solid first half, the Thunder struggled mightily in the 3rd both in scoring the ball and in stopping the Warriors offense, which started heating up. OKC went from up 3 at the half to down 9 with under 3 minutes to go. Without anywhere else to turn with shots not falling, OKC ramped up its defense, reclaimed the lead in the first 2 minutes of the 4th, and it was a back and forth affair through out the final period and overtime.

My emotions ran from being reasonably satisfied with the Thunder's 1st half performance, where they looked as if they knew exactly how to stymy the Warriors' offense and score efficiently, to a feeling of foreboding as the Warriors reversed the tone of the game in the 3rd. There were two elements of frustration - Westbrook is still struggling to finish at the rim, which is wasting his exceptional floor game that has shown no ill effects from his meniscus injury. He had little trouble getting around the Warriors' perimeter defenders, but once he got to the rim he either missed the layup or did not shoot it in such a way as to protect him from the interior defense, and they ended up swatting away a number of Westbrook's shots.

With Westbrook struggling to finish, our hopes turned to Durant, but he too was struggling from the floor. One would think that without Andre Iguodala suiting up due to injury that Durant would have had little trouble getting to the rim, but Durant frequently settled for fade-away jumpers. The image I had in mind was this one, Durant's shot chart: 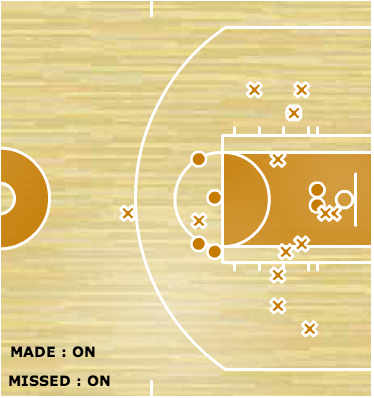 As frustrating as it all was, there the Thunder comeback happening right in front of me, and against a very good team that puts incredible pressure on an opposing team's defense. The Thunder figured out a way to win, even as the game went into overtime.

On the final sequence of the play, which is unfortunately truncated at the top, the Thunder ran a great sequence to get major contributor Serge Ibaka open at the elbow. It was a great set and a great shot. He just missed. (As an aside, that's where Westbrook was 3 years ago - missing game deciding shots. However the team never lost confidence in him, and now he makes those. If OKC treats Ibaka the same way, he too will see those winning shots fall).

Past is prelude, and that set the table for an amazing shot that was only set up by other fantastic hustle plays by Westbrook (launching himself at the rim to tip the ball from the Warriors' rebounders), then Sefolosha (a save and then a blind toss to keep the play alive), then Westbrook (soaring to snag Sefolosha's save), and then finally Westbrook again with the silly-stupid contested turnaround 3-point buzzer beater. Honestly, the only other guy in the league whom I could see doing what Westbrook did on that final play is LeBron. Lastly, take a look at Westbrook's foot on the final shot. Shades of Ray Allen vs the Spurs. Remarkable.

As great as Westbrook's final sequence was, I look to the end of the 3rd quarter is the best sequence of plays that aided in the Thunder's recovery after losing the lead and also the most powerful example of why Westbrook is like nobody else in the league.

With the Thunder trailing by 9 as the quarter wound down, Westbrook started to morph into the honey badger, or the Hulk, or whatever other comic book comparison you want to make, and flew into the danger zone. The team wasn't competing and was allowing his team to let the game slip away, and during the final moments of the 3rd, Westbrook decided to do something about it. He stole the ball from the Warriors 3 times, mostly by sheer force of will, and manufactured 4 FT's (he went 2-4) and drilled a 3-pointer to pull his team to within 6. The Thunder didn't recover completely in this 3rd quarter, but because of Westbrook's intense nature, they regained their competitive edge and collectively decided that they would finish well.

This sequence is a solid example of how the game of basketball is played on both an intellectual level as well as an emotional one. There are a lot of reasons why one could look at Westbrook's final stat line and think that he was not effective. Numerically, he wasn't. However, if he did not elevate his intensity and by pure competitive drive reestablish the Thunder's focus, OKC loses. There is no question about it.

There are plenty of numbers to throw around from this game that lose their luster in light of the first game between the two teams. The Thunder as a team shot under 40% from the floor, and the Warriors hit only 8-26 from 3-point range. In fact, it is kind of amazing that these two teams wound up with 113 and 112 points, respectively, even with the extra overtime period. It is a testament to how good they both are on offense.

Defensively however, the Thunder were light years better than the last game. As Kevin Durant had noted previously, their 3-point defense was not good the first time around, and the team was entirely focused on contesting those shots this time around. The close-outs were aggressive, players fought through screens, and for an NBA game that was played in sprints, the difference between getting a half a second to fire up a shot and a quarter of a second makes all the difference in the world.

On top of this, the Thunder did an exceptional job limiting the Warriors' points in the paint. After giving up 48 in game 1, they shaved 10 points off of that number. The team as a whole had 9 blocks, with Ibaka swatting away 4 of those. Ibaka in particular stepped up in a major way, as Kendrick Perkins was lost again to a dislocated finger. After the shaky 3rd though, the 4th quarter was good Thunder defensive basketball, as very few shots at the rim went uncontested. None was bigger than Ibaka's denial of a David Lee dunk attempt that occurred with 2:28 left in the 4th (Ibaka got Lee twice more in the OT period).

A defense isn't going to deny everything that the opposing team puts up, especially a team like the Warriors, but it makes all the difference in the world when OKC resolves that they will try. The result is what we saw in the 4th and OT.

I am simultaneously hoping/wishing for more of this and no more of this. I don't know if my psyche can take another game between these two teams that comes down to a buzzer beating, game-winning shot. And yet, this is what makes the NBA amazing.

Yeah, I think I will hope for another. At least one where Westbrook gets to walk off the court, guns hosltered, and a smile instead of a scowl.

Thunder Blunder: Kevin Durant, who struggled from the court, shooting only 7-22

Next game: vs the Minnesota Timberwolves at 6PM CDT on Sunday, Dec. 1st, 2013