Are the Suns the cellar-dwellers we thought they were?

After a disappointing loss to the Timberwolves, the Thunder head home to officially open the 2013-2014 season. Luckily for them, it's an easy matchup against the cellar-dwelling Suns.

The Suns are 2-0 heading into this matchup. For a team almost universally picked in the West's bottom three, that feat is nothing to sneeze at. Their victories came via a capable win against the Blazers, and a last second buzzer-beating victory against the Jazz. Neither the Blazers nor the Jazz were expected to make the playoffs this year, but Phoenix looked impressive in both victories. The first win came without Markieff Morris, and the second win featured a surprise performance from Dionte Christmas, who has been kicking around the NBA Waiver Wire since 2009. 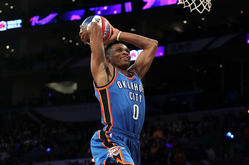 Russell Westbrook returns to action tonight vs the Suns. Is he ready?

The tandem to watch for in this game will be the back court duo of Eric Bledsoe and Goran Dragic. At the time of this writing, Dragic's status was questionable. But both of them are really quick and creative guards, with Dragic specializing in finesse and Bledsoe specializing in force. The biggest surprise on the team is Miles Plumlee, who didn't get a fair shake with the Pacers last season. He's absolutely dominated Robin Lopez and Enes Kanter so far, proving himself an offensive and defensive factor. He's also really good at creating his own shot, which can spell trouble for the Thunder's help defense down low.

In terms of the bench, the matchup to watch for will be Alex Len vs. Steven Adams. We've already seen Adams get some time against Gorgui Dieng, where he performed admirably. But it will be really interesting to see him go up against Alex Len, whom many argue has a much higher potential.

As a team, Phoenix has really struggled from three so far, and it might be their achilles heel. They have a lot of scorers that can get hot from that range, but they don't really have a true specialist. In today's NBA, where floor spacing means everything, it's a pretty strange site to see. The Thunder might be better off going with a more zone-ish type of defense here, especially with the high number of turnovers that the Suns naturally generate. However, I'm fairly convinced the defensive pressure will be at it's normal level on our end.

Speaking of our end, Kevin Durant will be looking to recover from a couple of sluggish performances. He faded in the fourth quarter against the Jazz on Wednesday, and he struggled from the floor against the Timberwolves. The Thunder will also be looking to end their ball-handling woes, hopefully getting Reggie Jackson consistently on the board or giving other players more responsibilities with the ball.

All in all, tonight should be a close game. I don't see the Thunder as cohesive enough to run away with anything yet, but the home crowd should be enough to spark them along.

What do you think's going to happen tonight? Let us know in the poll and comments!