Thunder quotes and clips: Durant reacts to visit from Jay-Z and Beyonce, win over Clippers

What were the Thunder reactions to their big win over the Clippers? And what did Kevin Durant have to say about playing in front of Jay-Z and Beyonce? Check out our post-game quotes and video clips to see the full story!

Share All sharing options for: Thunder quotes and clips: Durant reacts to visit from Jay-Z and Beyonce, win over Clippers

WTLC's KevinHFY recapped the game, you can find that here.

After the game, Scott Brooks praised his team's mind-set, their ability to run the Clippers' guards off the three-point line and their defense in transition.

Let's take a look at what Brooks, Kevin Durant and Russell Westbrook had to say after knocking off Los Angeles Thursday night.

Berry Tramel (The Oklahoman): What was the game plan tonight?

Brooks: "We wanted to get back in transition, and I thought we did a good job of that... We wanted to make sure we were prepared to understand their personnel. I thought our guys did a great job of chasing them off the three-point line."

This was one of Oklahoma City's best defensive possessions of the night.

The intensity is clearly there as Thabo Sefolosha stays right on JJ Redick's hip off the initial screens to free the former Duke Blue Devil. As Chris Paul and Blake Griffin re-start the offense with a pick-and-roll, Redick sneaks to the right corner. Blake draws the defense to the lane and kicks to a semi-open Redick. Sefolosha does a great job recovering and forces Redick's miss. 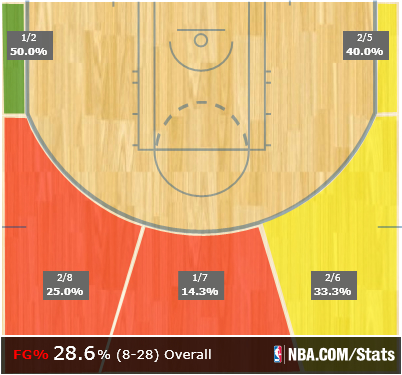 According to NBA.com's shot chart from Thursday night, the Thunder had the most success defending the left wing and top-of-the-arc three. The Clippers went 3-for-15 from those zones, which led to 28.6 percent-shooting overall from deep.

Nick Gallo (Thunder.com): Did you see consistency on the defensive end?

Brooks: "We played as well as we can defensively against one of the best teams. Blake (Griffin) got hot for a stretch, but we like guys taking long twos... If we can force guys to take long twos, we feel that's to our advantage."

For a stretch in the third quarter, it was apparent the Thunder were letting Griffin take any jumper he wanted. Serge Ibaka let's Griffin face-up and pretty much have the shot in this play. Ibaka gets a hand in Griffin's face and although Griffin hits the shot, this is exactly what Brooks wants in this situation.

Trey Hunter (SB Nation): How big was (Derek) Fisher tonight and how big has he been in late-game rotations so far this year?

Brooks: "The term has been going around for a while now, but he plays the right way... You want all your players, at the end of the game, to never look back and say I could've played harder. He never does that and that's what you like about him."

Scott Brooks has made it apparent he likes using Derek Fisher late in games. There's reason for that.

Fisher is able to play fresh in the fourth quarter. He doesn't play much in the first half of most games and when he enters late, he's able to guard point guards and two-guards.

In Example No. 1, Fisher sets the tempo of the possession by forcing Chris Paul to receive the ball high, above the arc.

Remember: Paul is one of the best players in the NBA.

If we can force guys to take long twos, we feel that's to our advantage. -Scott Brooks

Fisher fights over two screens and forces Paul to swing the ball. Off-the-ball, Fisher stays in great position to defend a Paul catch-and-shoot. Chris Dudley thinks he finds an opening for an easy jumper, however, Fisher, in perfect position, sneaks over and strips Dudley on the way up.

Example No. 2 is Fisher closing out and recovering beautifully on a Chris Paul-to-Jamal Crawford drive-and-dish. Fisher is 39 years-old and that was probably the best recovery of the night.

Tramel: How important was it for the bench to develop and play the way they've been playing?

Brooks: "I thought our starters did a good job of setting the tone, coming in with the proper mindset and energy. Our second unit did a great job of coming in and I think they increased the lead by five or six points... I thought Reggie (Jackson) did a great job of getting the group together. Fish and Steven (Adams) and Jeremy (Lamb) did a good job of sticking with our defensive game plan."

David Aldridge (TNT): How has the second unit earned the trust of some of the veteran guys like yourself?

Gallo: 17 assists in the second half. Did you like the way you guys executed down the stretch?

Durant: "No Doubt. The down-the-stretch execution was the best it's been this year. Everybody is moving and everybody is touching the ball... and that made us play better at the defensive end too."

Can you believe it? Eight passes?

This is probably the exact play Durant was talking about when answering Gallo's question. The Thunder used eight passes to swing the ball, ending with an easy lay-in for Ibaka.

And look at the group that's in: Westbrook, Jackson, Fisher, Durant and Ibaka. Is this the Thunder's most dangerous group down the stretch of games?

Kevin Kuzminski (News9.com): How did it feel having Jay-Z and Beyonce watching you?

Durant: "That was crazy. That's unbelievable for them to come all the way to Oklahoma City to watch us play... I hope we put on a good show."

On the Half-Court Shot:

Durant: "Wow. That's two in a row now. I think we might go broke after these guys making every half-court shot. Congratulations to the guys who've made it and it's really fun to see those guys hit that shot."