Thunder Trade Rumors: Do the Thunder Have a Chance at Omer Asik?

Kendrick Perkins, Andre Roberson, and a 2014 Pick are all things that the Rockets might want.

Share All sharing options for: Thunder Trade Rumors: Do the Thunder Have a Chance at Omer Asik?

So the big news in the NBA right now concerns Omer Asik. He's probably the NBA's best backup big, and he's definitely totally unsuited to play alongside Dwight Howard. After a few game of failed experiments, the Turkish giant now wants a trade to a team that will start him. The Rockets are obliging him, according to some.

Here's everything you need to know:

Given the information, it would seem that the Thunder's chance at Asik is shaky, at best. The Rockets' roster isn't exactly full of veterans, and it's unlikely that the Thunder would want to trade young talent, especially talent that they just got from the team in question. 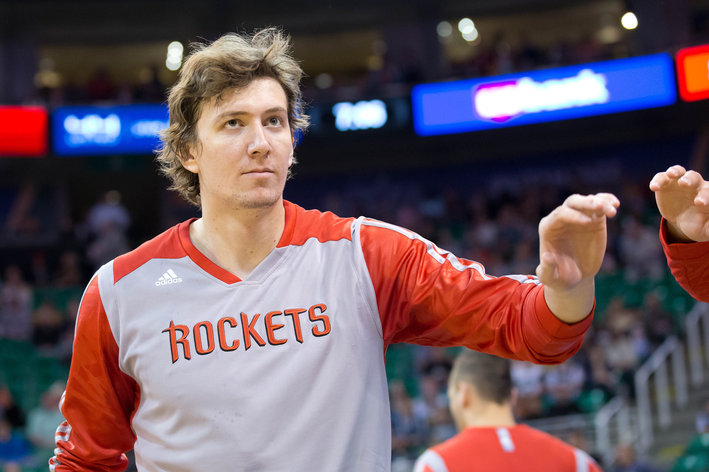 Bullets Forever reports that before the season began, the Wizards unsuccessfully attempted to acquire Asik for Emeka Okerfor.
However, I will say that there is a remote possibility that the Thunder are seeking a deal. Consider that the Thunder have had serious problems with their front court depth so far, and could have more serious problems going forward considering that Perkins is injury prone and Adams is foul prone. Plus, a deal for Asik wouldn't exactly break the bank, because it wouldn't push the Thunder's salary above the luxury tax, should they match it.
So what kind of deals are we talking about here? Well, obviously the Thunder aren't going to deal Durant, Westbrook, Adams, Lamb, Jackson, or Jones. The upside on them is too high. The only player out of that bunch that I could possibly see moving is Jackson, simply because the Thunder might not be able to afford him when his contract runs out in 2015. But the Rockets are looking for front court players, so it's not likely anyway.
That leaves Perkins, Collison, and Sefolosha in the trade discussions. For all intents and purposes, the deal the Thunder are likely to pursue would involve Perk, because he could be dealt for Asik straight up. Both Perk and Asik have cap salaries hovering around the 8 Mil mark, and it gives the Rockets the replacement front court player that they need.
Obviously, that deal has a lot of problems with it. Perk's value is about as low as you can get right now, as his game has steadily regressed over the past couple of years. He's also extremely slow in terms of the NBA, so it's hard to see him keeping up with Houston's offense for more than the 10-15 minutes a game that he'd get behind Dwight Howard.
Furthermore, the Thunder have very little to sweeten the deal with. If they don't want to break their rotation, the only prospect they've got at the moment is Andre Roberson. He's the perfect athletic stretch four that Houston might need in a small ball lineup, but they've already got a bunch of players stocked at the position. Plus, it's unclear ifRoberson is a better option at this point. The Thunder also have their 2014 pick, but it's likely not going to be much better than 25th or so in the draft.
So what we're looking at is a deal of Perkins, Roberson, and the Thunder's 2014 pick for Asik and a salary-filling player. It's a deal that could be done before December, it gives the Rockets an experienced player that they can plug into their lineup, and Houston gains a couple of assets along the way.
The trade certainly isn't ideal for either team. The Rockets could probably grab a better center and save more money next season with Asik, and they could probably get a better pick in 2014. The only real way that I could see them taking the deal is if they were enamored with Perk and Roberson and wanted to get a deal done before December.
From the Thunder's perspective, it definitely sticks them with what they have. The only non-rotation prospect becomes Grant Jerrett of the 66ers, if you don't count their long-shot foreign prospects in Tibor Pleiss and Alex Abrines. It also sticks them with forcing TWO new centers to learn an entirely new system, and could create a center controversy moving forward should Adams develop on schedule. Perhaps most importantly, the Thunder would lose a very popular locker room presence in Perkins.
In all honesty, any deal between these two teams is a total longshot. But should the Rockets want to take the deal I mentioned, I'd be all for it. It gives the Thunder a legitimate pick and roll center to work with, and finally gives them a reliable offensive option down low. Basically, he could be what Perkins represented 5 years ago. Most of all, the move would reinforce the Thunder's commitment to win now.
What do you think about a potential deal for Asik? Let us know in the comments!