In a thrilling shootout of a game, Andre Iguodala's buzzer-beater nudged the Warriors past the Thunder. LOTS OF THREE-POINTERS AND LOTS OF FUN.

So, uh, how about that game? Andre Iguodala hit a fading shot for the buzzer-beating game-winner right after Russell Westbrook hit a three from four feet behind the arc to give the Thunder a lead with one second left. The end result was a 116-115 win for the Golden State Warriors, and I am a whirlpool of emotions.Â Forget it, just watch this.

For the most part, this game was fun. The first half was absolutely ridiculous. Take Ray Allen in his prime, give him J.R. Smith's trigger finger, and then multiply that for all of the guys that went off in this game (and we'll talk even more about three-pointers later). The two teams were hot from the start, and maintained their hot shooting for all of the first half (resulting in a 62-62 tie at halftime) as well as for stretches in the second half. The Warriors did pull ahead when the Thunder stuttered in the third quarter, building a lead as high as 14 points. However, the Thunder pulled themselves right back into it with about six minutes left in the fourth. From there, it was a tight game until the end.

Russell Westbrook led the Thunder with 31 points, and Serge Ibaka followed closely with a career high 27 points. The Warriors were led by Klay Thompson's 27 points and Stephen Curry's 22 points on 8-22 shooting.

FUN, right up until it was sad. Three-pointers, but we'll talk about that later. Also, a lot of happy and sad emotions.

But really, that was a great game to watch. It was a brilliant offensive spectacle, and the Thunder shot 51.3% from the field while the Warriors shot 60.9% from three. The teams combined for 124 points at halftime and 231 points in the end. Russell Westbrook looked great tonight, with complete confidence in his jumpshot while attacking the rim well as always. Ibaka, as mentioned earlier, had a career high with 27 points â he shot well from midrange, and even more importantly, finished well at the rim.

Kevin Durant was the one who struggled tonight, as a combination of Iguodala and foul trouble held him to 20 points on 5-13 shooting and 8-9 free throws. Thabo Sefolosha continued an odd trend of rebounding well but struggling with his shot, as he had nine rebounds tonight to go with a 3-8 shooting line (two threes) for nine points. Perhaps most disappointingly, Steven Adams had another forgettable game in the absence of Kendrick Perkins, as he recorded just two points and a turnover in 14 minutes. Of course, this fast-paced game in which there were few rebounds to be had may not have been the best setting for Adams to thrive, so we'll give him a pass tonight.

Things I could use here are three-pointers, Steph Curry/Klay Thompson, or Andre Iguodala's buzzer-beater. Certainy, the problem definitely isn't offense when we shoot north of 50% and score 115 in regulation. Obviously, our struggles were on defense. With Kendrick Perkins out of the lineup, David Lee (20 points) proved to be extremely formidable. Durant had no chance of stopping the much bigger Lee in the post, and whether the Warriors were hot or cold from three (the former for most of the game), Lee's production was constant throughout. Not much can be done when the Warriors are shooting lights out, but it doesn't mean much when they're cold if they can still score in the paint.

And of course, we have to talk about the Warriors' shooters: when they're hot, why help off of them? There's no denying the Warriors made a ridiculous amount of contested looks tonight, but the Thunder weren't doing them any favors by offering up open or semi-contested opportunities. Jeremy Lamb, Thabo Sefolosha, Russell Westbrook, Reggie Jackson, all of them were guilty of helping away from shooters. It's one thing to offer those looks to a hot-shooting Andre Igoudala or Harrison Barnes, but when we're talking about a hot-shooting Klay Thompson or Steph Curry, there's no excuse for guys to rotate off of them because they will still make shots against decent recoveries. We were lucky those guys faltered in the fourth (which they still got open looks in) so that we could come back. If we ever play this team in the postseason, a very real possibility, this can't happen. KD knows as much.

Durant was asked how he liked the way the Thunder defended the 3-point line tonight. His reply: "You trying to be sarcastic? It was sh***y."

That's right â of the eleven players that attempted a three-pointer, Reggie Jackson was the only one not to make a single one. Even Mo Speights made one. Finally, let me show you the three-point shot charts (the first shot chart belongs to the Thunder, and the second to the Warriors). 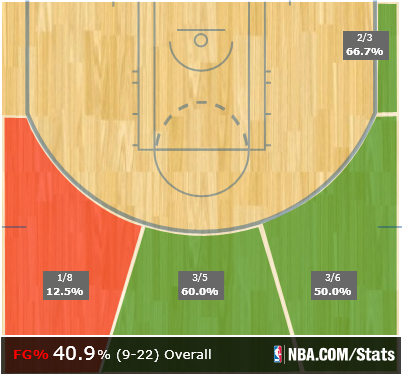 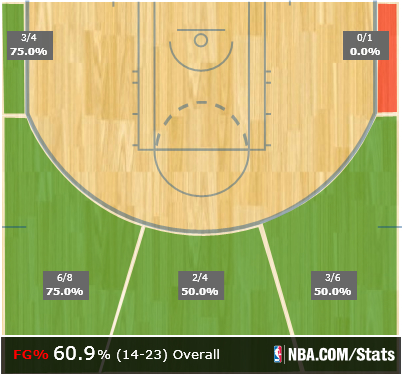 It was a crushing defeat, but it was a great performance on offense and it really wasn't a terrible job on defense. Nine times out of ten that that Thunder play like this, they'll win and in a comfortable fashion. Unfortunately, they just had to play against Steph Curry and Klay Thompson tonight. On the bright side, this is a game that the Thunder won't be forgetting anytime soon, and it will help when playing against the Warriors in the future.

It's nice to see Ibaka back after his early slump in the season, and while we can't say the same for the still-struggling Sefolosha, it's nice to see him chip in with his rebounds. Hopefully we can get Adams bouncing back too. Finally, we can't forget Jeremy Lamb, who was absolutely dialed in on his three-pointers in the first half (and for some reason played just seven minutes while attempting just one three-pointer in the second half).

Also, so you guys know:

If I tried to write about this game it would likely read like this: http://t.co/UMMzfbrTnT