We at WTLC have begun to take note that a strange dichotomy is developing with the Oklahoma City Thunder this season. The starters have struggled to create and hold leads, while the bench has unexpectedly been a key catalyst in the Thunder's winning 4 games in a row. Look no further than the Thunder's come-from-behind win against the Wizards to see guys like Reggie Jackson, Perry Jones III, and Jeremy Lamb stepping up and doing things that matter.

Grantland's Zach Lowe runs down his list of things he likes and doesn't like so far this season, and getting the thumbs-up is OKC's bench, influenced in great part by rookie Kiwi Phenom Steven Adams.

The Thunder kiddies have shown some intriguing glimpses of late. Steven Adams had two straight solid games before coming back to earth Sunday, and the Adams/Jeremy Lamb/Nick Collison bench trio has scored a robust 108.3 points per 100 possessions for the season. Lamb is shooting well enough, and hit a couple of big ones in the Thunder's silly comeback against the Wiz on Sunday.

Adams especially intrigues, since the Thunder's starting center is, um, not exactly an All-Star. Adams isn't the smoothest cat, and he has been a bit tentative and awkward negotiating larger distances with the ball. But he's also smart about sliding into the right space at the right time, he's a killer on the offensive glass, and he sports a soft touch on hook shots with both hands. Again: These guys are young, and things could go south, fast. But the Thunder all of a sudden don't look so shallow.

Lowe also notes that the Adams/Lamb/Collison trio is also giving up 109.5 per 100 possessions.

Film study: how good is the OKC bench? 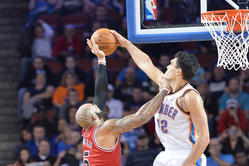 Trey Hunter examines some video footage to determine how the Thunder bench has contributed so far this season.

While Lowe is focusing specifically on Adams' role with the 2nd unit, it has really been with the first unit that he has shined. Adams got 31 minutes of action against the Pistons and rewarded the team for their trust with 17 points and 10 rebounds, 5 of which were offensive. On top of that, Adams has shown that after he grabs those offensive boards he is good at finding cutters, as his 3 assists in that game demonstrated.

Per Kevin Pelton of ESPN Insider:

One factor in Adams’ success might be playing next to veteran Nick Collison, whose defensive positioning helps complement Adams’ raw game. Indeed, Adams’ worst performance thus far came Sunday night, when Collison missed Oklahoma City’s overtime win over Washington because of a bruised left hip. At this point, Adams’ strongest attribute is simply his activity. He’s been relentless on the offensive glass, pulling down 17.6 percent of available offensive rebounds while on the floor — more than three times the league average. Those second chances and cuts to the hoop have produced easy scoring opportunities.

Lowe adds that there is a duality to the 2nd unit - it is solid offensively, but it is also porous defensively. Is this a problem? While we'd always like to see better comprehensive defense from players, we also have to keep in mind that for many teams, defense is the most sporadic element early in the season. For example, right now the Indiana Pacers are only allowing a crushingly low 85 PPG, while the champion Heat are allowing nearly 101 per outing. It is likely that the Heat's will come down and the Pacers will go up slightly, but that is where we are at the moment.

For now, I am ok with the fact that the Thunder bench is offensively minded while being a bit porous. One of the things we've learned over the past 2 seasons in OKC is that a great bench has to have a clear identity if it is to be relied upon. When James Harden was in town, he was often the best player on the court, and that advantage made the Thunder 2nd unit a fierce one that could cut into leads in a hurry or put games out of reach early in the 4th. Last season's bench did not have that same identity, and so we saw a lot of sporadic performances. If this year's bench is going to offer dynamic scoring from Reggie Jackson, Jeremy Lamb, and even Perry Jones III, that puts the Thunder on footing that not many other teams can boast.

What do you think?