The Thunder opened up their 2013-14 Pre-Season with a win over Fenerbahce Ulker, 95-82. While we don't want to draw too many conclusions after one exhibition game, we can still make some observations about what we saw and use it in preparation for where the Thunder need to be in a month's time.

1) It is JARRING to not see Russell Westbrook on the court and chewing up a team like Fenerbahce Ulker. Playing a slow-down team like the Memphis Grizzlies is one thing; those guys don't allow fast breaks and have few defensive breakdowns, so much of Russ's explosiveness is mitigated. Against a team like this though? Not having him out there really demonstrates how drastically different and unfortunately inert the OKC offense is going to be for a while.

2) Kevin Durant still had a bit of the Goodman League mindset in him as the game got going, but that is not that surprising and entirely forgivable. After a slow start, he started to remember that he's the best player in Turkey and his talent slowly overcame his opponent.

3) This game affirmed one of my biggest fears - the Thunder still lack a coherent 3-point offense. Which is not to say that they lack 3-point shooters who can shoot a high percentage, but rather that they have not yet developed a good offensive scheme that produces specific high value 3-point attempts. Shooting-wise, the team only managed a paltry 2-14 from the floor. While Thabo Sefolosha, Jeremy Lamb, and Reggie Jackson all look like they have refined their shooting mechanics, which WILL benefit the team as the season goes along, the problem of basic scheming has not yet been addressed. 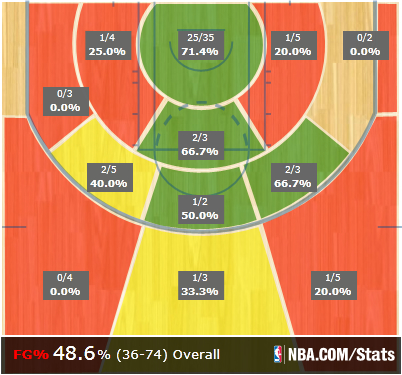 Out of their 74 total shots, 35 of those came at the rim. That is good, especially given how Z observed the weakness of Fenerbahce's interior. What I don't like are all of those 3-point shots at the wings, which culminated in a whopping 1-9 from the floor, and only 2 shots from the corner, which is statistically the best 3-point shot to take. Other teams run offenses dedicated to producing this exact shot. OKC still has work to do here.

5) Reggie Jackson continues to demonstrate notable improvement in his game mechanics. His jump shot is quicker, he finishes better, and he's finding open men quicker. What holds him back is uncertainty that goes along with young players who are still trying to figure out where they fit in. He had only 6 shot attempts (Sefolosha shot 11 times), and that's a number that he is going to need to feel comfortable increasing because the Thunder offense depends on it.

6) Serge Ibaka has clearly been working on his back-to-basket moves, and we got to see a bit of a jump-hook out of him. That said, it looks kinda funky. The key to the jump hook is verticality; you have to be able to go straight up and shield the defender with your body. Ibaka showed a tendency to jump away from the rim, which turned the hook shot into a sort of side-ways push shot. If you're fading away like that, then shoot a fadeaway, not a hook shot.

7) Perkins do what Perkins do. Which includes HAND.

8) Jeremy Lamb looks like he is ready to get his NBA education underway. As a primary bench player, he is going to have to figure out how to score points efficiently. This is perhaps the best lasting lesson from watching James Harden play in OKC - he understood the value of producing points in an efficient manner. The best way to do this is to get to the free throw line. Lamb...did not get to the free throw line. This makes all the difference in the world in shooting 4-9 and scoring 9 points, vs shooting 5-10 and scoring 17 points (Harden's 2012 average that earned him 6th Man of the Year honors).

9)  An NBA bench needs an identity. This identity might be offensive efficiency, it might be defense, it might even be dogged offensive rebounding. Two years ago, the identity was offensive efficiency, as the bench was often the catalyst for the Thunder's recovery in games that were slipping away. Last year the bench lacked a clear identity, and as a result their production was inconsistent. While we cannot yet discern much from one game, we do know that a lot of their offense is going to come from the wings in Jackson and Lamb. Those two can realistically get a shot up whenever they want to, but what is going to be incumbent on the 2nd unit is to figure out how to maximize this ability and emphasize interplay between the wings and the bigs, particularly Nick Collison and Steven Adams.

10) Steven Adams. He's got really good footwork. Lest you think I'm slighting him, I would follow it up with the assertion that good footwork for a center is the foundation for his effectiveness, especially in a day and age where the game is faster and more athletic than ever before. Adams looks fluid in his movement, whether it is spinning off the pick and roll, working for post position, or even firing simple outlet passes. He does commit fouls at a wonderful clip, (5 in 15 minutes of play), and that will need to be curbed since OKC already has one high volume fouler in Hasheem Thabeet. Even so, the kid has promise.