We break down the individual performances and look beyond the talent differential.

It's easy to point to the lower echelon of talent on this Fenerbache Ulker team and say that the Thunder were easily superior. But as with all things in life, the real answer is more complicated.

In the first quarter, with both teams sporting their starting lineups, the Thunder were beaten 28-20. Kevin Durant wasn't defended really well, but he was having a ton of trouble shaking the rust off. He started the game shooting 1-6, missing some really makeable shots. On the other end, Fenerbache's primary strategy was to exploit the slow speed of Kendrick Perkins and Hasheem Thabeet. Both Luka Zoric and Gasper Vidmar were able to create some easy shots this way. Fenerbache also had no real trouble obtaining open threes. The Thunder were jonesing for steals around the top of the key, and they always seemed to leave a wing player wide open. One of those threes was straight up legit though, with Bojan Bogdanovic straight up beating out Kevin Durant for an easy three.

The Thunder were quick to re-control the game, though. They really started to pound the paint in the beginning of the second, with Durant basically leading the way. Fenerbahce, on the other hand, concentrated on the perimeter, bricking shot after shot. They suffered from a thin bench, with Omer Onan, Oguz Savas, and Nemaja Bjelica out of the game. This resulted in them having to rely on some players who are too young to play in the NBA, which speaks for itself. The starters of Fenerbahce played a good chunk of the second, but the youngsters were just out of their league trying to guard KD. 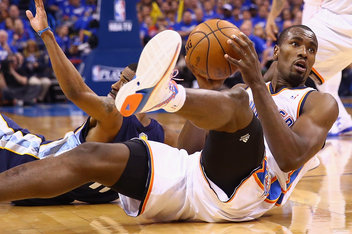 It is only the first pre-season game, there was still much to examine.

The aforementioned high school all-stars are also the reason Fenerbahce had a lot of trouble in the fourth. They were playing the Thunder's variation of the NCAA All-Stars, but they still had a mountain to climb in terms of talent. Ibaka and Fisher were able to close it out early on, and the bench had no real problem cruising into the paint.

The third quarter was where the game was really decided, though. For all intents and purposes, Fenerbahce's offense was stilted and ineffective. They went to the line 14 times, and their offense just seemed to take turns trying to hammer it into the paint or pulling up for bad threes. It was pretty evident that the team had some ballhandling issues, with McCalebb unable to create anything for anybody but himself, and Baris Ermis stuck to the bench. and at the end of the day, when you've got a European team only executing basic plays and relying on their stars to create, they're just not going to get very far against an NBA team.

I was really impressed with the opening performance of Steven Adams. I know that his level of competition wasn't exactly phenomenal, but this was a guy that I expected to be sitting at the end of the bench to the entire duration of his first year. With Perk out and Thabeet struggling, he got some serious minutes in the second half. His points didn't wow me, as he was able to twice get a mismatch with the smaller Linas Kleiza twice and tip it in over Emir Preldzic, but you knew his heart and energy was in it. (This isn't something I could say about Cole Aldrich.) He also rebounded better than most Thunder bigs, and played semi-solid defense. You could tell that he was overcompensating at times, but the key is that he's improving. I'd still rather see Thabeet on the floor at this point, but I'm really glad we drafted this guy.

The other really nice performance came out of Jeremy Lamb. Now, as you might know, I'm a bit skeptical when it comes to Lamb's skillset, and his performance tonight was far from perfect. He missed a few open jumpshots, some of his points were against high school level players, and he had a few unnecessary turnovers. But I still liked what I saw. Namely, he proved himself very capable of setting up Serge Ibaka. If he can get the defense to respect his off-the-dribble shot, then it does worlds for creating space in the mid-range or the paint for Serge, who really needs someone to pass it to him. All of Lamb's assists were pretty basic, so I'm not dubbing him Harden 2.0 any time soon, but I still liked what I saw. And Harden certainly wouldn't grab the steals that this dude got.

The other young guys showed signs of promise as well. Andre Roberson was a monster on the boards for his size, and he played some really aggressive defense. Offensively, he's pretty much just limited to jumping at the rim, but he did attempt a corner three, which only further heightens my suspicion that he's being trained to replace Sefolosha. Perry Jones was pretty forgettable, only playing in the fourth and struggling to find a role offensively. Diante Garrett, a training camp signee, had a really nice-looking drive to the rim, but he looks a bit too wild at the moment.

I'm not going to spend much time talking about the guys we know, but I'll throw out some short comments. Kevin Durant is as healthy and athletic as ever, but I really hope he won't have to take on a ball-dominating role so regularly, especially if his shot is off. Serge Ibaka ran up the score a bit late, but he's still the bomb.com when it comes to protecting the rim. Thabo Sefolosha did a bit of showing off for the Fenerbache fans, but it was apparent that he had a bit of rust as well. Reggie Jackson was a bit timid when it came to scoring, but it looks like he's ready to accept his role as a distributor. Nick Collison was his usual high IQ self, Hasheem Thabeet lost a couple of balls, Kendrick Perkins had some flashes of his old self before his injury, and Derek Fisher had a few uncharacteristically successful drives to the rim.

Looking at Fenerbahce's side of things, the stats pretty much tell the story. Linas Kleiza looked like the early Eurobasket version of himself, struggling with a lack of athleticism (he could barely dunk) and a ruined shooting stroke. Bo McCalebb was really effective against Reggie Jackson, but he never really took over and gave a consistent boost to his team, which is usually his forte. All things considered, he's still a player with NBA potential.

The player with the most NBA potential, though, has to be Bojan Bogdanovic. He would have been in the NBA this season if the Nets could afford his contract fee, but for now, he'll have to settle for dominating the Euroleague. His main asset is his dead on three point aim, and it showed with his 4 of 8 shooting performance tonight. He can hit it consistently from 3-4 feet from behind the arc, and he shoots really well off the dribble. A couple of his misses barely rimmed out, and he has a good feel of where his game is. What you didn't get to see tonight were his turnaround jumper and array of post moves that really put him over the top.

Emri Preldzic is another potential NBA player. I know it seems like I mention James Harden all the time, but that's a good comparison for this guy. The only problem is that he plays alongside Bo McCalebb instead of Eric Maynor. as a result, he's basically trying to be a 6'9" point guard. His passing is excellent and his dribbling is above average, but he turns the ball over too much and isn't enough of a scoring threat to play in that role consistently. Yet, Fenerbahce makes the same mistake that the Turkish national team did, and he's going to continue to have issues with his role all year.

When you look at this game as a whole, it was fun to watch for a while, but it's pretty clear that everyone was playing at about 75-80%. Some plays saw a total loss of defensive cohesion, a lot of players were missing really makeable shots, and Fenerbahce clearly didn't see a need to win the game. They sat their starters during a critical period of the early fourth, and just let the game peter out. I expected a bit more, but meh, it was just nice to see these guys go head to head in the first place.