Is Thabo Sefolosha Ready for the Big Time?

A 14 point performance and increased offensive role has us all wondering what's in store for Thabo this season.

Share All sharing options for: Is Thabo Sefolosha Ready for the Big Time?

Three years ago, he was a offensive liability, bricking open threes in the first round of the playoffs against the Lakers.

Two years ago, he was a joke, taking minutes and a starting spot away from the emerging star that was James Harden.

One year ago, he was the able defensive specialist who seemed to find his groove as a three point shooter.

This year, he could be one of the team's primary offensive options.

I know it might seem strange. After all, Thabo is 29 years old, and his game hasn't changed much since Day 1. He's never really showcased much of an ability to drive the ball beyond a basic baseline cut, and the majority of his points come on the break and from the corner.

But in last night's game against the Jazz, his offense was as diverse as Durant's. In the first quarter, he burrowed into Richard Jefferson, stopped on a dime, and nailed a mid-range jumper. In the second quarter, he got Enes Kanter to come out to the perimeter, bite on a fake, and allow Thabo to nail a reverse layup. In the third, he stole two passes and managed to take them all the way for easy dunks, both times in the face of Jazz defenders. Even his clutchness has improved, as he nailed a buzzer-beating jumper that he received cross-court before the end of the half.

I know that it's only one game, so you can't take too much from how well Thabo performed on the stat sheet. He's had similar offensive performances before, and we all know that he's offensively capable, more or less. What's really interesting is how he's taken a greater role in handling the ball. Let's break it down. 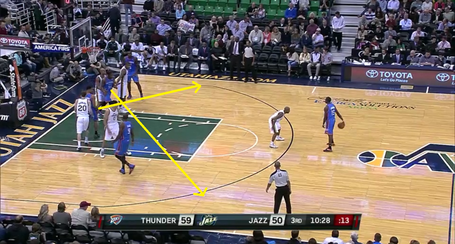 We start off the play with Reggie Jackson at the top of the arc. The wings (Durant and Sefolosha) are on the blocks, while the bigs (Ibaka and Perkins) are a bit further down the baseline. Both wings run out of the paint in a criss-cross pattern. 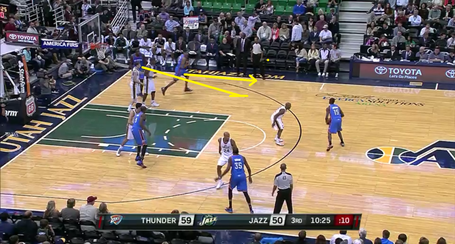 Sefolosha delays his run a little bit, and goes out to receive the ball. Gordon Hayward goes to chase, and Perk sets the pick. 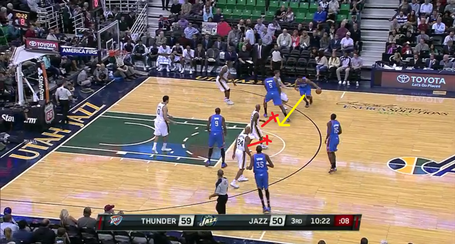 Perk's pick works perfectly, as Derrick Favors seemed to be expecting something different entirely. Sefolosha rolls unhindered to the top of the key, where John Lucas III and Richard Jefferson await. 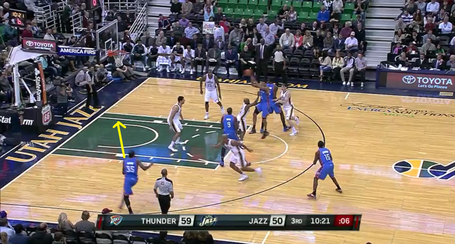 Now, Sefolosha has two excellent offensive options. By sucking the defense in, he opened up Reggie for a three, and gave Durant tons of space to work on the wing. He opts for Durant, who grabs an easy dunk. 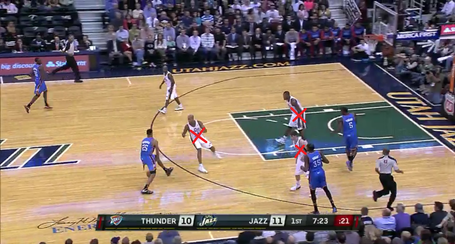 The Thunder are setting up what would appear to be a typical offensive play. All of the Jazz players are in defensive position, and there's little potential for a fast break. Typically, you'd see Sefolosha kick it out to Durant or Jackson. 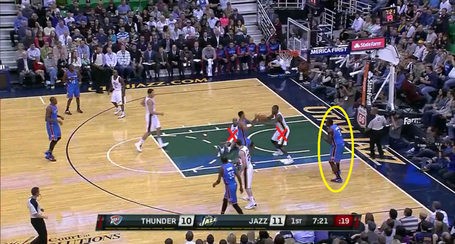 But Sefolosha decides to take it in anyway. He manages to cross over Richard Jefferson, draw Derrick Favors, and get an open short-range shot for Perkins. Perk opted not to take it, but it was a nice idea nonetheless.

Those are the only plays I managed to get to before the NBA stats site decided to give up on me. But you still get the basic idea. Thabo Sefolosha now has the green light to make actual decisions on offense. He doesn't automatically hand the ball off, and he'll even try an isolation play or two. He also doesn't appear to be limited to simple and rigid things like a two-man game. Rather, it looks like a few plays are actually drawn up for him to be involved.

Of course, I'm going to play devil's advocate here and negate myself a bit. For one thing, a lot of Thabo Sefolosha's points in this game came because the Jazz were having gargantuan ballhandling problems. They kept getting easily trapped at the top of the arc, and the Thunder were getting out on the break like nobody's business.

The second dark cloud looming over Thabo's potential offensive inclusion should be obvious to anyone that watched the fourth quarter. The Thunder had 0 assists in the fourth (and, indeed, for the last 10 minutes of the third). Mostly, this was because they almost exclusively relied upon a lukewarm Kevin Durant. In the fourth quarter, he shot 3-11, had 3 Turnovers, and went 8-10 from the free throw line. I'm certainly not here to blame KD for his performance, as 42 points is nothing to sneeze at. But he was definitely in takeover mode. 18 Offensive plays in that quarter involved KD shooting the ball or turning it over, while a mere 5 did not.

Granted, the reliance on KD seemed natural. After all, the Thunder's offense was grinding to a halt at the end of the third with a couple of missed threes. And the Thunder's second best scorer, Serge Ibaka, was having a really bad night, missing a lot of dinky shots. But, in my opinion, it's no reason to take the ball out of Jackson's and Sefolosha's hands. If it weren't for a couple of intentional fouls at the end, the fourth would have been by far the Thunder's worst offensive quarter. KD barely carried the team past an expected West cellar dweller on his own, so you can imagine how hairy things might get in the next couple of weeks if this trend continues.

At the end of the day, I think it's really essential for Thabo Sefolosha to continue in his increased offensive role, at least for the first couple of weeks. He's going to see some time with the bench, and it's apparent that neither Lamb nor Fisher will have the tools to run a consistent offense. Thabo can provide a bit of consistency and stable passing. He won't be able to cross over everybody like Richard Jefferson, but his teammates have wanted him to shoot the ball more for years. It might be time for Selfishlosha to live up to his namesake.