Russell Westbrook Could be Back Mid-November

Recent reports suggest that Westbrook is ahead of schedule.

Share All sharing options for: Russell Westbrook Could be Back Mid-November

Via Adrian Wojnarowski at Yahoo! Sports:

Oklahoma Thunder star Russell Westbrook has made significant progress in his recovery from a second surgical procedure on his knee and could return to the Thunder's lineup within two weeks, league sources told Yahoo Sports.

The Thunder issued an original timetable of six to eight weeks from Wednesday's opening night for Westbrook, but barring an unforeseen setback he could be back in the lineup by mid-November.

Honestly, this news is pretty shocking. Given the Thunder's history when dealing with injuries, the fact that the surgery was to repair what went wrong in a previous surgery, and the whole Derrick Rose fiasco last year, it didn't look like good 'ol Russ would be back for a long time.

Can Westbrook make a full recovery? 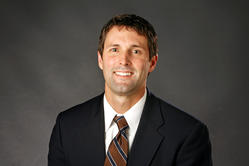 But, if what Woj says is true, it bodes very well for the Thunder's playoff seeding hopes. Here at WTLC, we didn't think the Thunder would be much more than a .500 team without him. If he can come back with only a few games under the Thunder's belt, then the option to re-capture the #1 seed will definitely still be there. And with teams like the Rockets and Warriors potentially finishing 5th or 6th, getting as high of a seed as possible is a huge priority.

This development also gives the first few games of the season an increased importance. The absence of Westbrook has opened doors for a few bench players to potentially grab minutes that they wouldn't have otherwise, and they now have limited time to prove themselves. If someone like Roberson or Jones had a breakout game, would Brooks put in the effort to get him minutes when Westbrook comes back? It's hard to say, but time will tell.