Share All sharing options for: Andrew Johnson's Versatility Ratio measures Durant as the most versatile scorer

Last week at Grantland, Kirk Goldsberry came up with the 'ShotScore' metric to try and measure "efficient shooting" by accounting for shot efficiency from different locations across the floor. As a follow-up to improve upon Goldsberry's stat, Hickory-High's Andrew Johnson came up with a new metric to account for scoring versatility.

Like Goldsberry, Johnson used shot data from different areas of the floor to measure shooting ability. However, instead of calculating an estimated points over average the way Goldsberry did, Johnson took his shot data from different locations around the floor and averaged it out to measure scoring versatility. This also allowed him to factor in free throws, an element that ShotScore does not account for. The end result was a 'scoring versatility index' that listed some of the league's most versatile scorers.

To build the index I used Hoopdata.com's shot data, that I have used in the past on shot locations, along with their free throw data. I divided each player's efficiency at HoopData's five shot locations by the average player's efficiency. The five locations are, At the Rim, Short (three to nine feet), Mid-Range (10-15 ft), Long-Two's (16-23 ft) and Threes, along with made free throws per field goal attempt. Then I took the average of those scores times the percentage of zone's where the player attempted a shot.

The intent was to measure how many different locations a player could score efficiently. Like any efficiency measure there were sample size issues, but limiting the selection of players with at least 250 shot attempts gave me very presentable results.

Who is the best scorer? Durant vs LeBron 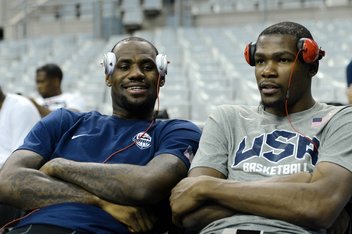 Unsurprisingly, it was our own Kevin Durant that led the list. However, what might have been surprising was just how big his lead is over other players. Durant had a versatility ratio of 1.51, which identified him as the most efficient scorer from across the floor. He was distinctly separated from the rest of the pack, with second-place LeBron James scoring just 1.33 which was much closer to the top 19 mean of 1.24. For comparison's sake, Goldsberry's Shot Score had LeBron first with a +231 score (points yielded over average) to Durant's +206.

Comparing Durant's numbers in each shot location to the rest of the top 19, Durant generally had one of the highest ratios in each area of the floor. He didn't lead in any one area, but ranked top 3 in half of them. This is yet another way for us to consider Durant as one of the greatest scorers of our era.

Another notable member of the top 19 was Serge Ibaka, ranking 11th with a versatility ratio of 1.22. Ibaka held the highest ratio from midrange, and compared well to the others at the rim and from long range.