The Thunder welcome the Nuggets into the 'Peake for the 3rd pre-season game of the season.

The Thunder play their first home game of the pre-season tonight, as the Denver Nuggets come to town to continue what has been one of the most enjoyable rivalries of the past few years. I have written it repeatedly and I still stand by it. If I met a person who had never witnessed basketball before and wanted to know why people love it, I'd show them the Nuggets playing against the Thunder. The two teams highlight everything that is so exciting about the NBA - they play at a lightning pace, the game celebrates the elite athleticism with which the NBA abounds, there is a natural contrast between a star-driven team and a concept-driven team, and of course there's a little bit of chippy-ness to the rivalry.

Witness this classic from 2 seasons ago:

The Nuggets will be on the second of a back to back tonight, so given that they played the Spurs yesterday we shouldn't expect a whole lot from the Nuggets' starters. Furthermore, the Thunder are still getting used to Reggie Jackson running the team, so they will not be playing at the same breakneck pace that we usually see when Ty Lawson and Russell Westbrook go head-to-head. Given that this is a pre-season game, we should see a few sparks and that will make it a fun event, but as is the norm, winning is not really the goal in this outing.

Instead, what I will be looking for is evidence of the following:

- Reggie Jackson's continued improvement. Given that he's going against Lawson, it will be interesting to see how Jackson paces his own offense.

- Kevin Durant has been taking his playmaking to a whole new level, and the Nuggets have always had trouble guarding him. With Corey Brewer now in Minnesota, can Wilson Chandler get the job done?

Thunder vs Nuggets head to head 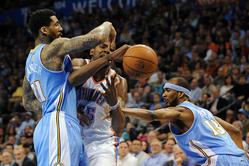 Want to see how the Thunder did against Denver a year ago? Check out our full OKC-Denver coverage here!

- Steven Adams will see some time against the athletic JaVale McGee. I'm curious to see how Adams is able to stay with McGee and not get into foul trouble.

- Last season, we saw a subtle but material shift between these two teams. In previous seasons, the Thunder could play the Nuggets straight up and expect a win most of the time. Last year however, Denver's defense improved just enough and their offense played even better than OKC, such that the tables turned. OKC never sought to specifically game plan the Nuggets, and I think it ended up in costing the Thunder some wins. Even though it is pre-season, we need to see if the Thunder do a better job implementing a specific game plan to deal with Denver's speed.

- What does the transition from George Karl to first time head coach Brian Shaw? We will see tonight.