After struggling through the first 24 minutes of play, the Thunder offense found its groove and cruised to a big win over the 76ers, 109-85.

The Oklahoma City Thunder defeated the Philadelphia 76ers, 109-85. After a closely contested first half that saw both teams struggle shooting the ball, the offenses opened up in the 2nd half. In this style of play, the Thunder had the clear advantage and outscored Philly 63-43 in the remaining 24 minutes.

The Thunder were led by Russell Westbrook, who finished with 27 points, which included 4-4 from behind the 3-point arc. Kevin Durant provided another uber-efficient scoring night, finishing with 26 points on 8-15 shooting to go along with 6 rebounds and 3 assists. Off the bench, Kevin Martin finally found his shooting stroke and connected on 4 3-pointers of his own, finishing with 16 points.

The Sixers were led by 6th man Nick Young, who finished with 21 points, with all of his made baskets being 3-pointers. Center Spencer Hawes struggled from the floor but did finish with a game-high 13 rebounds.

The Thunder followed up a poor first half by controlling most of the 2nd half, and after the disaster that was the Nets home loss, that is good enough. The Sixers have struggled as of late, but it is important to remember that they are still a very good defensive team that understands their defensive rotations. In the first half the Thunder played into Philly's defensive strengths and did not produce the kind of scoring opportunities necessary to build any kind of lead.

In the 2nd half, the Thunder were able to capitalize on their clear advantages. In particular, Russell Westbrook's penetration and Kevin Durant's posting up were two elements for which the 76ers had no easy answer. Strangely enough, this was the rare game where Westbrook finished with more turnovers than assists. Although some of the TO's were careless, most of them came within the natural flow of what OKC was trying to accomplish, and the 76ers simply made good defensive plays. Those turnovers did not detract from his overall effectiveness, as he had his way with Jrue Holiday for most of the night.

Durant meanwhile struggled early as he has for the past couple games, trying to drive through the stingy Philly perimeter defense and failing to get good looks. Beginning in the 2nd half, Durant found his low-post muse and began to work off the right block. Durant is now strong enough to hold off most defenders, and Thaddeus Young and Evan Turner were no match. Once Durant established his position on the blocks, it opened up the rest of the Thunder offense and they cruised to the win.

The Thunder got excellent guard play in this game and despite Nick Young's shooting frenzy, OKC clearly had the advantage overall. Westbrook led the charge in what I would call his best pure scoring game of the season. To be sure it was the rare night where Westbrook went 4-4 from 3-point range, but even in that respect Westbrook did not get trigger happy, but constantly attacked what the 76ers were willing to give him. Instead of barreling full speed from one end of the court to the other, Westbrook played at a very good tempo throughout, never forcing things but waiting for the opportunity to arise. When seams in the Philly defense opened up, Westbrook still had his top gear to shift into, and with much better balance and pacing, finished well at the rim.

Westbrook's play was greatly accentuated by the contribution of both Reggie Jackson and Kevin Martin and both deserve mention. Jackson continues his steady play as he is solidifying his hold on the backup point guard position. Once again, he played at a good pace where he was never out of control and avoided the trap of over-penetrating without an outlet. He has a sneaky explosiveness in his game, and by simply slowing down, he is finding that he is able to more easily generate the space he needs to either shoot or pass the ball. Jackson seems to finally be clearing the hurdle of being a wild card where Scott Brooks never knows if he is going to help or hurt the 2nd unit. Perhaps his extended play during the Phoenix win was a part of it, but Jackson looks completely at ease with what his assignment is and is doing it well.

Meanwhile, Jackson's bench backcourt mate Kevin Martin finally found the shooting touch that had deserted him the past few games. After shooting only 11-36 in the previous 3 games, Martin scored an efficient 16 points off of 5-9 shooting, including 4-4 from 3-point range. Martin's success tonight demonstrates how important his role has become to the Thunder team. If he is not finding and making good shots, there is little left on the bench to produce points. Nick Collison can contribute a little bit here and there, and as noted above Jackson improves daily, but there is nobody else who can score in double figures and help give the Thunder bench a competitive advantage.

For a half, it looked like Martin was in for the same woes, as he committed several careless turnovers and looked out of sorts. However, when Durant hit Martin with a beautiful skip pass and Martin drained the corner 3-ball, you could see that he finally started to relax and assure himself the worst of the slump was over. Martin hit 3 more 3-pointers in the 4th and OKC was on its way to the big win.

The Thunder played solid defense for most of the night, holding the offensively challenged 76ers 10 points below their season's average. In the first half the OKC defense struggled a bit to stay with Nick Young, who was finding enough spacing behind the arc to hit 3 3-pointers and keep his team within two possessions at the half. Aside from Young's long range shooting however, there was very little space to be had for the 76ers offense.

In particular, Philly loves to run pick-and-rolls along the sidelines in order to free up shooters along the baseline. Their side-PnR worked on a few occasions in the 1st half, but after that the Thunder defense shut it down well. Most importantly, the Thunder did a very good job preventing the 76ers to set up the corner-3, a defensive weakness that helped lead OKC to its big home loss against the Nets.

By the time the 2nd half rolled around, the 76ers realized that they were not going to be able to grind out a defensive win against OKC and so tried to up the pace and force the Thunder into offensive mistakes. While OKC did make a number of open-court errors, in the end the Thunder's pure offensive talent overwhelmed the 76ers. OKC struggled to only 46 1st half points, but in the 2nd half surged to 63 points against the Sixer defense.

The Thunder embark on a lengthy stretch starting on Sunday, a 15 game stretch where 12 of those games will be on the road. Their first match-up will be in Toronto to face a Raptors team that has been struggling.

I actually believe that this lengthy road trip is going to do OKC a bit of good. Sometimes a competitive team like the Thunder need the solitude of the road in order to build team focus and maintain their intensity on a nightly basis. Michael Jordan in particular used to love playing on the road because it helped him channel his competitive spirit while avoiding the normal home distractions. This extended road stretch will likely feature a few bumps along the way, but it comes as a good time where the Thunder are looking to reestablish their offensive continuity and avoid the defensive lapses such as we saw against Brooklyn.

Russ would look great with a high fade, don't you think? 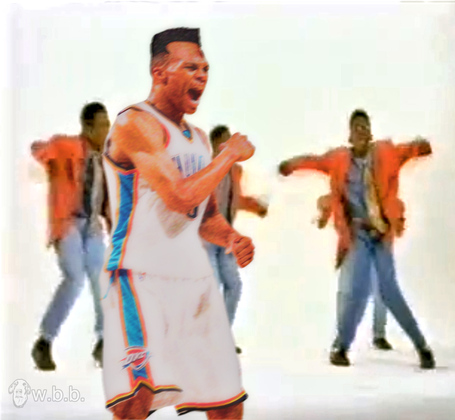 Thunder Down Under: Kevin Martin, who finally rediscovered his shooting touch, scoring 16 points on 5-9 shooting.

Thunder Plunderer: Nick Young, 21 points on 5-7 shooting behind the arc.