The Thunder were gifted a CP3-less Clippers team and operated in workmanlike fashion to defeat Los Angeles on the road, 109-97.

The Oklahoma City Thunder defeated the Los Angeles Clippers, 109-97. Both teams were coming off of disappointing losses in their previous games. OKC had dropped a grueling overtime game to the Nuggets on Sunday, while the Clippers had lost to the Golden State Warriors (OKC's next opponent) on Martin Luther King Day. Both squads were looking to right the ship. The Thunder were able to ride their solid defense through three quarters and combined it with a strong offensive 3rd quarter in order to build a double-digit lead.

The Thunder were led by Kevin Durant, who led all scorers with 32 points off of 11-19 shooting, including 5-6 from 3-point range. Durant added 7 rebounds and 7 assists to his offensive totals and looked much more comfortable setting up his team's offense tonight. Durant was followed by his teammate Russell Westbrook, who scored 26 points while grabbing 4 rebounds and handing out 6 assists.

The Clippers offense, missing their All-Star catalyst and MVP candidate Chris Paul, struggled for most of the night. Blake Griffin controlled the paint, scoring 31 points while grabbing 11 rebounds, but his help was far less efficient. Paul's backup PG Eric Bledsoe shot a poor 4-16 from the floor for 12 points, and super-reserve Jamal Crawford shot 6-18 for 14 points.

The Thunder operated with workmanlike efficiency for most of the game, waited for their opportunity, and then surged ahead. I was a little bit worried about them in the beginning, because they seemed to be sleep-walking a bit as the Clippers surged to an early 8 point lead. However, the Thunder regained their footing and once they found their offensive rhythm they were able to tie up the score after a quarter.

OKC continued trading baskets with the Clippers up to the 3rd quarter, where the Thunder made their move. Combining strong defense and efficient offense, the Thunder pushed the lead from 4 at the half to 14 by the end of the 3rd. It was clear through this stretch that the Clippers did not have the offense to contend with the Thunder while Paul was sitting on the bench in a sport jacket and tie. The best they could do was trade baskets the rest of the way and lost in such fashion.

The Thunder game plan was sound and OKC played patiently to earn this win. That said, for some reason it seems like whenever the Thunder have a chance to make a 'statement' kind of game, there always ends up being some sort of caveat or asterisk. Tonight, the asterisk was that the Clippers were coming off the 2nd of back-to-back games, and more importantly, Chris Paul was out with an injury. OKC will definitely take the win and the season series from the Clippers, but it would have been fascinating to see how the two teams really stacked up at full strength.

The Thunder approached this game with a defensive mindset rather than an offensive one and had a sound plan on how to contend with L.A.

What I really liked the most about this win was that the Thunder had a clear plan in place for how to deal with the Clippers offense. Without Paul, the Clippers had to turn to backup PG Eric Bledsoe to run the offense and most importantly, to set up the Clippers' 3-point shooters. Caron Butler, Matt Barnes, and Jamal Crawford are all exceptional spot-up shooters and are key to opening up the lane for Blake Griffin and DeAndre Jordan. OKC addressed this by essentially giving Bledsoe the mid-range jumper whenever he wanted it while blanketing the corners. Bledsoe is not a good shooter and he hobbled his way to a poor 4-16 shooting night. He could not make a basket and he could not get to the rim, and as a result none of the other shooters found much space either. The Clippers managed only 4-16 from 3-point range on the night, and without that extra offensive punch, they could not keep pace.

The wild card of course was Crawford, who after CP3 is probably the Clippers' best offensive creator. He too struggled though, making only 1-6 from 3-point range and 6-18 in all on the night. OKC gave Griffin the lane as much as he wanted, but by sealing off the corner 3's and not allowing Bledsoe to find open shooters, the Thunder took away most of the Clips' offense.

The 3-point shooting is the number that immediately deserves notice. The Thunder shot 15-27 for the game (55.6%) and 4 different players made at least three 3-pointers, led by Durant's 5-6 shooting from beyond the arc. As is the case for most volume shooters like Durant and Westbrook, 3-point shooting comes and goes. The pair can get that shot almost any time they like, so it is just a question of whether their shot is falling on any given night. However, what made this night particularly effective was how the Thunder offense seemed to regain some of its footing.

The Thunder collected 24 team assists on the night, and this increased patience in their passing was critical in springing Kevin Martin, Thabo Sefolosha, Serge Ibaka, and even Reggie Jackson free for open looks. Even though Jackson finished 0-3 on the night, he was still getting great looks at the rim. These secondary players are more reliant on good offense to set up their shooting, and tonight the Thunder accomplished this goal.

By contrast, without Paul playing the Clippers struggled mightily from beyond the arc, finishing 4-16. Very few openings were to be had as the Thunder defense sagged off of Bledsoe and waited for the perimeter passes to come. The Clippers' struggle is a good revelation - without CP3 setting up their shooters, their perimeter game can turn sour very quickly.

The Thunder accomplished a number of things tonight:

1) OKC reclaimed the top spot in the race for the #1 seed;

2) With their 2nd win over the Clippers this season, OKC now has won the season series and owns a potential tie-breaker advantage;

3) The Thunder quickly refocused their team after losing to the Nuggets in a very unfocused way.

Looking ahead, the Thunder must now go to play Golden State tomorrow night against a Warriors team that is a far cry from their moribund ways that we've seen over the past few seasons. Currently the Warriors are a game out of the 4th seed and are coming off of a huge win over the Clippers as well. Golden State would like nothing more than to knock off the two best teams in the West in consecutive games, so they will be ready and focused when OKC comes to town.

Tomorrow's game will be vastly different from the one we just saw, but it will be an equal challenge all the same. 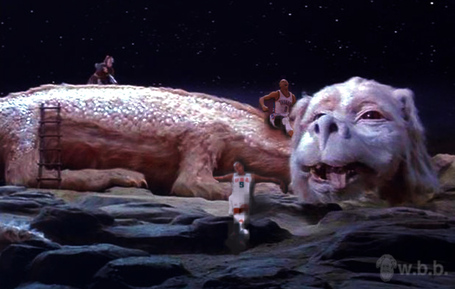 Thunder Blunder: Serge Ibaka, who was DQ'd after 2 offensive fouls in the 4th quarter