When Bad Officiating Costs the Thunder a Win

I'd like to say that Sunday Night's game was fun to watch. But what I saw just didn't feel right. The amount of illegal screens that were called during overtime was absurd, and really disrupted the flow of the game.

Share All sharing options for: When Bad Officiating Costs the Thunder a Win

I'd like to say that Sunday Night's game was fun to watch. The Thunder made an 11 point comeback in the last 3 minutes, the game went to overtime, and the result wasn't sealed until the final buzzer. On paper, it has all of the ingredients for a great regular season game. But what I saw just didn't feel right. The amount of illegal screens that were called during overtime was absurd, and really disrupted the flow of the game.

So, the question is: Did the refs make the right call? Or, more appropriately, "Did the Thunder really set those illegal screens, or were the refs being a bit too overzealous?" It's clear that this is becoming an issue. An illegal screen called against Kendrick Perkins is what angered Kevin Durant into his first ejection against the Nets on January 2nd.

But before we get into the practical, we must get into the theoretical. Straight from the NBA's rulebook, here's the section dealing with illegal screens.

(1) assume a position nearer than a nor-mal step from an opponent, if that opponent is stationary and unaware of the screen-er's position, or

(2) make illegal contact with an opponent when he assumes a posi-tion at the side or front of an opponent, or

(3) assume a position so near to a moving opponent that illegal contact cannot be avoided by the opponent without changing direction or stopping, or

Okay, here's the rules in laymen's terms: An illegal screen is called when the screener sets the screen too close to an opponent, pushes the opponent, or moves his feet while screening. If you take them at face value, it seems rather easy to declare a screen "illegal". Mainly because it's impossible to police what kind of contact is going on without having 5 or 6 officials out on the floor.

Anyway, let's take the rules and apply them to the three critical offensive foul calls that killed the Thunder in overtime. 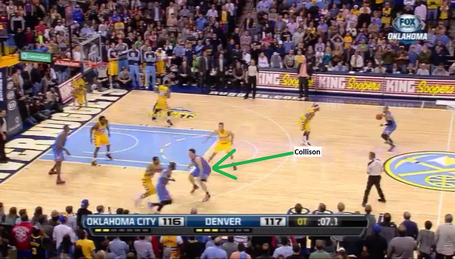 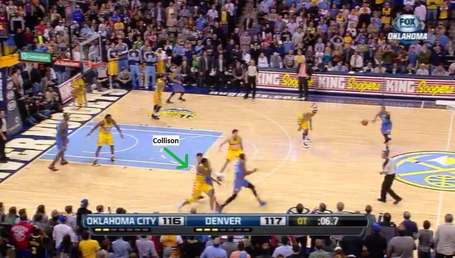 In this play, it might seem hard to tell what rule Nick Collison was violating on this screen. But the screen was definitely illegal. Look at where Collison's feet are in the first and second pic, compared to how far Andre Iguodala ran. Collison definitely didn't give Iguodala proper chance to avoid the screen. Thus, under the rules stated above, it was an illegal screen. 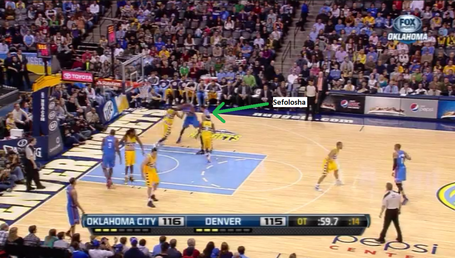 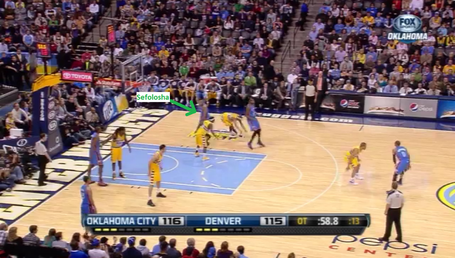 This rule infraction is a bit harder to see, and perhaps is a bit more bogus of a call. Unlike the infraction above, Thabo Sefolosha sets his screen well in advance of the defender coming. But at the last possible second, he shuffles his feet a slight amount and hip checks Ty Lawson. Lawson utilizes a bit of acting skill, and the offensive foul call is rewarded. Technically, the foul call was the correct one. 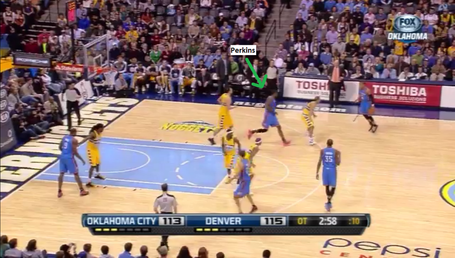 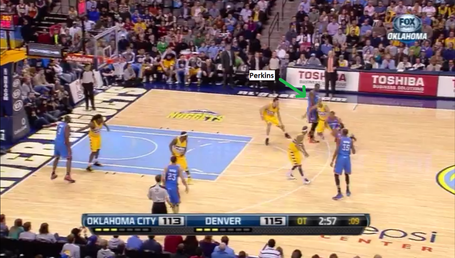 This one is the same infraction as the first. While most of Perk's illegal screens are called because he's shuffling his feet, this one was called because the screen was set way too close to Andre Miller. He practically ran up to his heels. Again, technically, the refs made the right call.

This begs the question. Were the refs being overly picky? It's fair to say that a number of calls go wrong in the NBA. Sometimes, the refs either just can't notice all of the nuances going on in the game, or they choose to let some things slide. But what makes a good NBA ref isn't how well they call the game, it's how consistently they call the game. And Sunday night, as I'll demonstrate below, the refs weren't consistent at all. 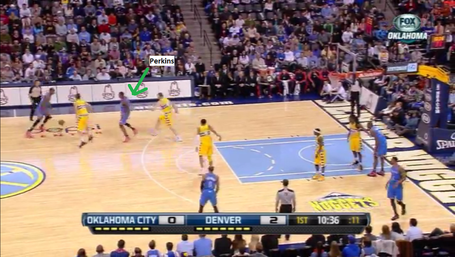 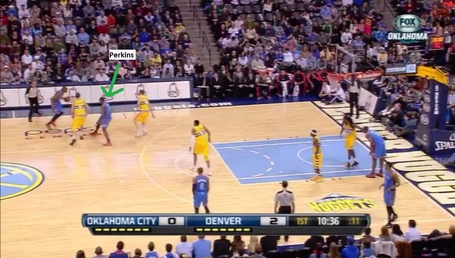 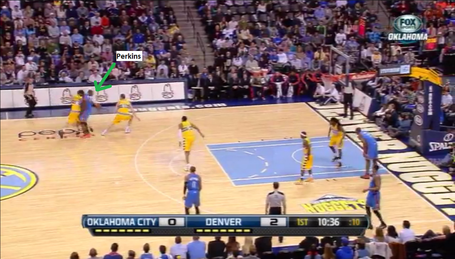 This is one of the most obvious illegal screen calls there is. Perk both shuffled his feet and set the screen way too close to his opponent. Yet, nothing was called. 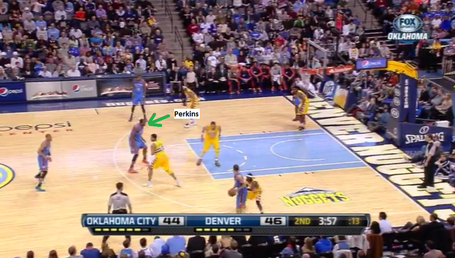 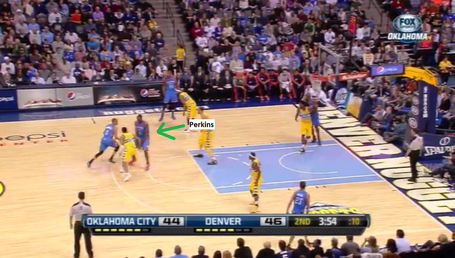 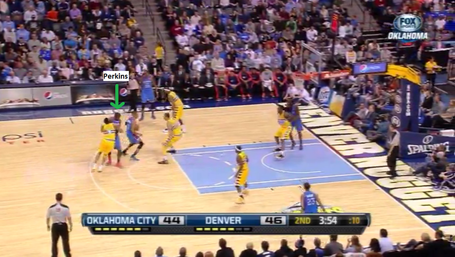 Again, we see the same problems. Perk sets this screen way too close, and he shuffles his feet into the defender as he sets the screen. Clearly, an illegal screen was set. Unfortunately, the officials didn't call it. 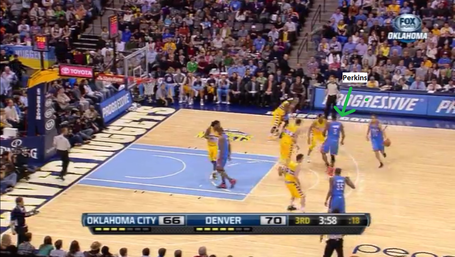 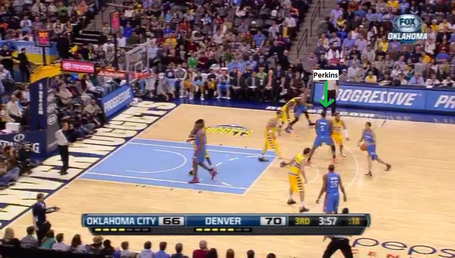 The screen was set way too close to his defender, his legs are spread too far apart, and he hip-checks Andre Iguodala, which sends Andre flying. Guess what? No call.

The pictures speak for themselves. The referees weren't calling a consistent game, and the offensive fouls called against the Thunder during overtime were total and utter garbage. Keep in mind that I used the three best examples of illegal screens in the game. If I were so inclined, I could probably throw up 10-15 more plays showcasing illegal screen calls the refs missed.

Were the refs part of some huge conspiracy against the Thunder? No, not at all. What happened is that the refs knew particular offensive possessions were important, so they focused on them a bit too heavily and got overzealous with their calls. But what they called then was contrary to what they had been calling all game, and came off as total BS (Bad Stuff).

In the end, sometimes, referees just have to let the guys play. My one regret about this game, as a fan, isn't that the Thunder lost. It took a minor miracle to get to overtime, anyway. It's that what could have been a fantastic finish was basically robbed from me because somebody woke up on the wrong side of the bed that morning.