The Thunder dropped a high scoring affair in overtime against the Denver Nuggets, 121-118.

The Oklahoma City Thunder lost to the Denver Nuggets in overtime, falling 121-118. The Thunder overcame a lackluster performance through 3 quarters by coming from 11 down with 3:03 remaining to tie the score at the end of regulation at 109. However, once the game resumed, their poor shooting and sloppy offensive performance continued. They could not overcome missed jumpers and offensive fouls, and Kevin Durant's game-tying 3-point attempt fell short.

The Thunder were led by Kevin Durant, who finished with 37 points, 7 rebounds, and 8 assists. His teammate Russell Westbrook finished with 36 of his own points, including the game-tying 3-pointer at the end of regulation, but shot a poor 10-26 on the night. The duo struggled for most of the contest, combining to shoot a very poor 17-46 (37%). The pair also had a combined 12 turnovers.

The Nuggets were led by reserve Corey Brewer, who was the player of the night both in offense (26 points on 8-17 shooting, 3-6 from 3-point range) and defense, as he was locked up against Durant for much of the night. Kenneth Faried finished with a strong game as well, finishing with 16 points, 10 rebounds, 4 assists, and 4 blocks.

If the Nuggets fans didn't totally hate Russell Westbrook before, they surely do now.

Of course, Denver got the last laugh.

While overall this game definitely had the tenor of a playoff meet-up because of its intensity and uneven play, on the whole it was not really a well-played affair by either squad. Both teams finished with 23 turnovers, and the dueling PG's Westbrook and Ty Lawson each had 7 of those. The game was a high-scoring affair because both teams are extremely fast, run the break well, and have players who know how to finish, but I would have been much happier with a game like the Trail Blazers outcome, where OKC featured mediocre offense but strong defense.

You could say that Denver got a measure of revenge from last week's OKC shellacking, but that really wasn't what this game was about. I'm sure both squads knew that that Thunder win was an anomaly, and this one - fast paced, high scoring, and close down to the wire - is much closer to what we've come to expect.

My disappointment though comes not necessarily because OKC lost, but because this is the 2nd game in a row where the offense as a whole played poorly. The Thunder have lost that early season rhythm that they had when the ball was being distributed well and numerous players were getting a chance to finish. The team finished with 22 assists which is not bad, but the bench scoring should be worrisome. After Kevin Martin's solid 18 points on 6-10 shooting, the rest of the bench produced zero points on 0-2 shooting. OKC needs to find its offensive balance again because the Durant/Westbrook top-heavy offense becomes too subject to wild swings in offensive consistency based simply on how well those two are shooting at any given moment.

I thought the Thunder really should have lost this game in regulation. They certainly did enough (or little enough) to deserve it. Their 4th quarter was an abysmal affair, as they fell behind by 11 points twice in the final 6:37 of play. It was only because of a lot of free throws and then 3 consecutive clutch 3-pointers by Durant, Martin, and Westbrook respectively that gave OKC just enough to catch Denver. Meanwhile, the Nuggets offense fell apart in the final 3:03, as they were able to manage only 4 free throws during that time period. What made it worse for them was that the Nuggets had the ball with 22 seconds remaining and Ty Lawson was not even able to get off a shot attempt.

Unfortunately for OKC, they could not rebound with better offense in the 4th quarter, and the parade of iron continued. After Westbrook started off the extra period with a sweet baseline fade-away jumper, the Thunder made only one single basket the rest of the way, and none over the final 2:43. When the Thunder were not missing shots, they were turning the ball over. OKC committed a crippling 3 offensive fouls in OT, and all of them were off-the-ball in nature, which meant that the offense was more careless than anything else.

The Nuggets were not much better, but the untimely OKC turnovers gave them just enough breathing room. Durant had a clean look for a game-tying 3-pointer with under 4 seconds to play, but he probably rushed the shot more than he needed to and came up way short.

If the Thunder had somehow managed to pull this one off, the key statistic would have been the huge disparity in free throws, with Durant/Westbrook shooting 35-38 by themselves (by way of comparison, the Nuggets only attempted 34 free throws as a team).

On the losing end however, the statistic that jumps out at me was how poorly the Thunder performed on the glass. To be sure, Denver is currently the 2nd best rebounding team in the league, but OKC is not shabby either. However, the Nuggets controlled both ends of the floor after missed shots, winning by a 50-39 margin, including 20-11 on the offensive glass alone. Normally that would have spelled a rout, but the Nuggets' sub-par free throw shooting kept the game close.

Aside from the rebounding disparity, OKC also did a very poor job attacking the middle of the Nuggets defense. Denver is ranked only 24th in the league and that should have spelled ample opportunities for Durant and Ibaka to get into the lane and score easy baskets. However, the Nuggets crushed the Thunder in the paint, outscoring them 66-36. Particularly in the 1st half, OKC did a poor job stopping the ball at the point of attack and both Lawson and Andre Miller were able to work into the paint for both lay-ups as well as kick-outs (Denver finished with a solid 8-18 from 3-point range).

The loss doesn't bother me that much; Denver is a good team that is capable of running with anyone. What is more disconcerting is how the Thunder offense has gotten completely top-heavy with Durant and Westbrook getting the majority of offensive focus. To be sure, when a mismatch is present the team needs to go to whomever has the advantage. However, on this night it seemed like Ibaka and Nick Collison could have gotten far more opportunities to score, which would have greatly helped free up Durant for his own offense. The Nuggets were collapsing on Durant whenever they could and in the end forced him into a poor shooting night (7-20) with 5 turnovers.

Up next are the Clippers, now tied with the Thunder for best record in the NBA. The Clips' defense is far more stout, and their offense far less forgiving, when their opponents do not play good basketball. OKC has two days to think about a better way of going about how to proceed. Hopefully they will do a better job focusing on their defense and allow the offense to happen more organically.

As for Mr. Westbrook, I kind of hope he's not embracing his full villainy by trolling Denver. The league already has one White Mamba. 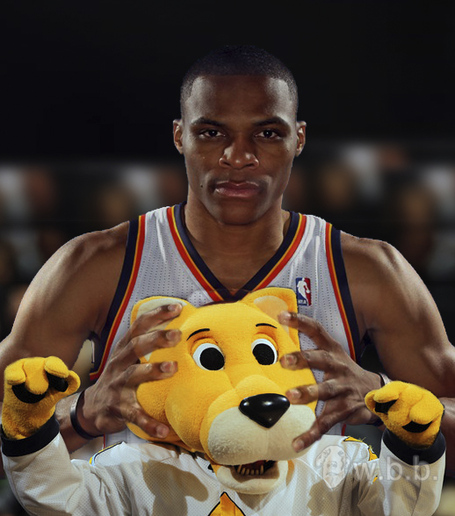