Kevin Durant's 52 Points: A Blessing or a Curse?

The talk of the town today is Kevin Durant's epic 52 point performance. From a fan's standpoint, it's one of the coolest things you could ever watch. But could this ball domination from Durant actually end up hurting the team more than it helps it?

Share All sharing options for: Kevin Durant's 52 Points: A Blessing or a Curse?

The talk of the town today is Kevin Durant's epic 52 point performance. From a fan's standpoint, it's one of the coolest things you could ever watch. It's just one guy going ham the entire game, and making his opponents look silly.

But could this ball domination from Durant actually end up hurting the team more than it helps it? Bear with me here. In the first three quarters of the game, Kevin Durant shot 8-16 from the floor, while going 11-11 from the free throw line. His +/- ratio was +5, and the Thunder headed into the fourth quarter with a comfortable 9 point lead.

However, during that fourth quarter, Kevin Durant's performance took a nosedive. He shot 2-11 from the floor, and it's arguable that his misses contributed greatly to the Thunder's fourth quarter misfortunes. His four perfect trips to the free throw line did contribute to keeping the offense afloat, but when you consider that he took over half of the team's shots in the fourth, it's impossible to say that his effect wasn't an overall negative during that time.

Obviously, Kevin Durant saved the day later. He steamrolled the team through overtime and nailed some clutch fadeaways. I'm not knocking this guy's performance. He's definitely one of the greatest players of our era, and he single-handedly lead the team. But the elephant in the room is still there. Is the team better when Durant takes over?

Common knowledge might say no. I remember my Dad talking about how during the 80s, he'd look up Bulls box scores. Jordan would score something like 50 points, but the Bulls would have lost by 10. The Bulls weren't bad by any means, but they were definitely a team with flaws. They only began their championship dominance once Jordan didn't dominate the ball as much and dropped in nearly every statistical category.

Yet the numbers might say yes. When Kevin Durant has scored 40 points or more, the Thunder/Sonics are 17-9, which is a .653 winning percentage. Compared to the overall record of the Durant-era Thunder/Sonics, which is 227-207 with a .523 winning percentage, it's an overall plus. It's also worth noting that the a lot of the losses came during the first two Durant-era years, which weren't very good as far as records are concerned.

There's perfectly good arguments to be made on both ends of the spectrum, and we could spend all day talking about them. Yet, a better question might be whether Durant is more effective as a fourth quarter specialist. There are games where Durant drifts and doesn't play a major role in the action all the time. But he doesn't take less than 14 or 15 shots unless the game is a total blowout. Furthermore, there's no question about his focus during the fourth. The entire team (except, perhaps, Russell Westbrook) will defer to him when he wants the ball late, and he's carried the team to victory with efficient offense with this method.

But in tonight's game, when he tried to carry the fourth quarter offense, it pretty clearly failed. Kevin Durant was visibly tired from leading the team early on. He wasn't driving to the basket anymore, and he wasn't getting good shots. What he took were mostly heat check-like shots, where he backed into his defender and tried to nail one while fading away. The shots were also deep 2s, which is the least efficient shot in the game. He got to the line four times, but two of those were on fouls in the back court, and another was on a fadeaway jumper. It wasn't until overtime where KD really kicked it into high gear, attacking the basket and getting better attempts.

On the defensive end, KD's play suffered as well. In the latter portion of the game, he was assigned to guard Vince Carter, who was especially hot that night. He caught KD sagging on defense a couple of times, able to step back and nail a couple of open jumpers. But KD's worst farces of all came in the late fourth. 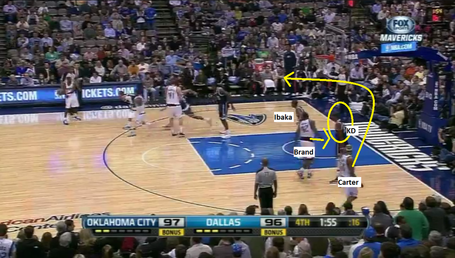 On an absolutely critical defensive possession, KD drops the ball. While he's busy looking at Darren Collison, who hadn't taken a shot since the third quarter, Vince Carter slips by his back, totally unnoticed. KD is somehow absorbed into blocking Elton Brand, who is supposed to be guarded by Ibaka. 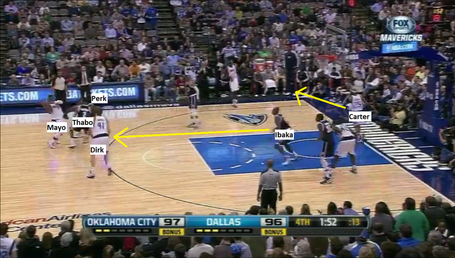 If this situation wasn't bad enough, Kendrick Perkins goes out to pressure O.J. Mayo on a screen a mere second later. (I know he's hard to see in the image, but believe me, he's hiding behind Thabo.) This leaves Dirk wide open, forcing Ibaka to go out and guard him, rather than the also wide open Carter. Meanwhile, KD is forced to stay in the post and guard the bigger Elton Brand. 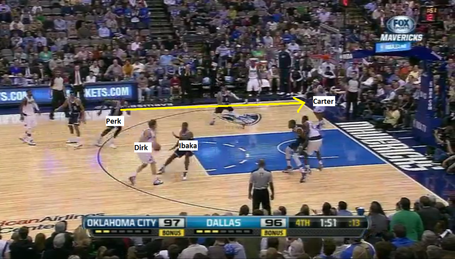 Luckily, Ibaka gets to Dirk in time to stop the open jumper. However, Carter is still wide open, and Perkins, a man without a country, is forced to run over and guard him. Meanwhile, KD is forced to continue fronting Brand, because if he breaks off to guard Carter, Dirk is in a great position to make an easy pass for a score.

The rest shouldn't be too hard to figure out. Carter slides back up to the three point line, gets the ball, exploits the mismatch with Perkins, nails an easy jumper. Mavs take the lead back. But, the failure didn't stop there. 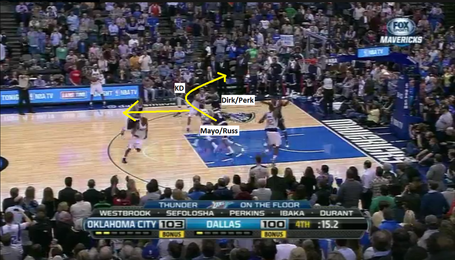 At this point, KD has already committed an error. He's standing in the most useless possible position on the floor. There's literally nobody behind him that the inbounder can pass to, and he's standing with his hands on his knees. Need I remind you there's 15 seconds left to go in this game? If there was any time to give it your all, it'd be now. Anyway, OJ Mayo is about to run to the corner of the floor, which distracts KD. As a result, KD doesn't really react when the ball is inbounded to Dirk. 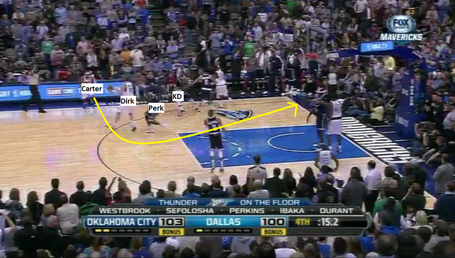 Because of KD's hesitation, disaster strikes. Vince Carter has an open path to the basket. Kendrick Perkins recognizes it, and steps over to stop the drive. KD is forced to guard Dirk, and once again Vince Carter has the easiest mismatch to exploit in the world. He speeds past Kendrick Perkins for a monstrous dunk, and the Mavs were eventually able to force overtime off of a miracle Mayo three.

So, what does this fourth quarter slump tell us? We all know Kevin Durant has great ability. But his discretion in using that ability at the proper times will determine a lot about the destiny of this Thunder team. In Laymen's terms, he doesn't have to be "The Man" every night. He's an excellent offensive player, but we need him to use those talents when it matters in the fourth. You can't expect to close out a hot Mavericks team in the second quarter.

When it comes down to it, if Kevin Durant would have played more of a facilitator's role earlier on and saved his energy, the Thunder might have wrapped this one up in regulation. I know, some guys weren't living up to their potential, and Ibaka was clanking a lot of shots. But surely, KD could have nabbed more than one assist.

I think this game was more of a ghost of Denver than anything else. When you blow out a legitimate playoff team, you get a big head, and think you can take that killer instinct and dominate the league's landscape. But the fact is, this team is more than Durant, and it's more than Westbrook. And if, for some reason, this trend of ball domination continues, we could see a repeat of the 2011 Western Conference Finals.

What did you think of KD's 52 point game? Drop a comment and let us know!