The Thunder won their 4th game in a row. OKC overwhelmed the Suns with their talented all-star duo, as Durant and Westbrook combined for 77 points in the road win.

Bright Side Of The Sun recap

The Oklahoma City Thunder defeated the Phoenix Suns, 102-90. The Thunder used a dominant performance by their two All-Stars, Kevin Durant and Russell Westbrook, to control the game for most of the evening. Even though OKC was never able to put together a decisive run that could have turned the game into a rout, there was still very little tension in a very matter-of-fact win for the Thunder.

Kevin Durant finished with a game-high 41 points off of 15-30 shooting. To go along with the points, 27 of which came in the 2nd half, Durant also grabbed 5 rebounds and had 2 blocked shots. Russell Westbrook complimented Durant by scoring 36 of his own points while grabbing 8 rebounds and handing out 5 assists against only a single turnover.

The Suns were led by Shannon Brown, who finished with 21 points. Michael Beasley, Durant's old DC buddy who has struggled to find consistent court time this season, contributed 14 points and 11 rebounds off the bench.

Serge Ibaka once again sat out on the night due to his chest contusion that he suffered against the Lakers.

The Thunder were playing the 2nd game of a back-to-back, so we expected their energy to be lower than normal. For a team who is expected to win but is still faced with the threat of fatigue and a let-down game, the successful mantra is usually, 'just find a way to win and move on.'

Tonight, we did not see the hot new 2012-13 version of the Thunder offense, the offense that swings the ball around the perimeter, shares the shots, and finishes with 30 assists on the night. Rather, the Thunder knew that the best way for them to win this game in an efficient manner and move on was to simply let Durant and Westbrook to chase their own offense. While the strategy led to an up-and-down affair where the Thunder were never truly able to put away Phoenix until late, it was still a winning formula because they do not have anyone who can cover either of those OKC players.

As a result, Durant and Westbrook got virtually any shot that they wanted, and finished shooting a combined 29-54 for 77 points, and tacked on a combined 13 rebounds, 7 assists, and only a single turnover. One got the feeling that if the game were closer than it was, these two could have increased their production even further if need be.

As established, the Suns have nobody even close to the talent level that OKC has in Durant and Westbrook.

To go along with their dominant performance however, the Thunder once again did a sound job defending against the Suns and protecting their own possessions. Durant has said that one of his team's benchmarks is to keep the other squad from shooting 43%. The Suns shot only 41.7% on the night, including 9-25 from 3-point range. What the Thunder are realizing with this kind of regular defensive performance is that it gives them far more margin for error than they have known in the past. THe margin is so great that we barely even notice the nights like tonight when OKC shot only 77.3% from the free throw line and 29.4% from 3-point range (OKC is #1 in both categories across the NBA). OKC is currently ranked 8th overall in points allowed, and their point differential between points scored and points allowed is a league-best 9.1 per game, 0.7 more than the 2nd place Clippers and a full point more than the 3rd place Spurs.

The Thunder also did a great job protecting the ball while playing a relaxed game. OKC turned the ball over only 10 times on the night, with PG Westbrook committing only 1. As a result, the Suns got very few easy opportunities to score and make up the difference in the two teams' talent disparity.

En lieu of writing out statistics, I think it is even more beneficial to take a look at Durant's and Westbrook's respective shot charts in visual form. 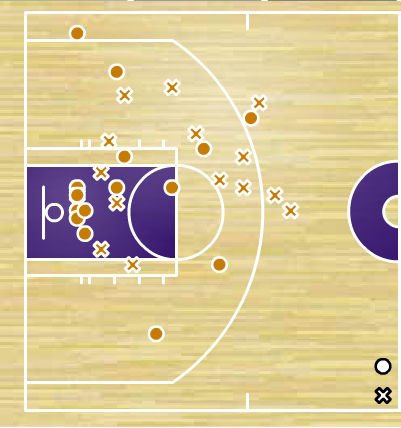 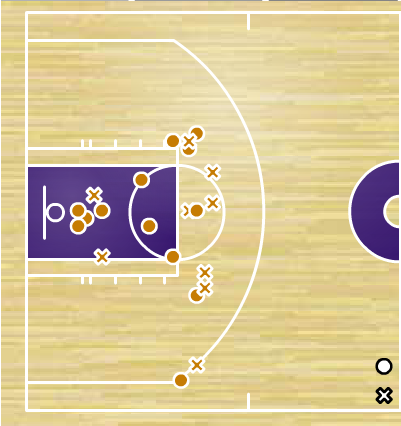 Those two images, more than anything else, address the outcome of this game. Suffice to say, Durant and Westbrook had very little trouble getting to the spots they wanted to, and when they did, they made their field goal attempts with ease.

The Thunder get a night off and then are back home against the Denver Nuggets. Tonight's game might stick out simply on account of the fact that it seemed like the best team in the West had trouble putting away a lottery team. While in the abstract that may be true, in reality OKC was playing the 2nd of a double-header, and last night's battle with the Trail Blazers was no picnic.

OKC came in with a good game plan on how to exploit their opponents weaknesses, and then went out and executed that game plan again and again. The Nuggets will be a completely different beast, but the equation is the same. Devise a game plan to put Durant in a myriad of positions to create offense, and then watch as OKC looks to continue its mastery over Denver.

Thunder Down Under: Russell Westbrook, 36 points on 14-24 shooting, 8 rebounds, 5 assists, only 1 turnover

Thunder Blunder: Nick Collison, who did not grab a single rebound in 16 minutes

Next game: vs the Denver Nuggets on Wednesday, Jan. 16 at 7PM CDT