The Thunder sent the Lakers to their sixth consecutive defeat, rolling over the Lakers 116-101.

Share All sharing options for: Quick recap: Thunder trounce Lakers on the road, 116-101

The Oklahoma City Thunder defeated the Los Angeles Lakers, 116-101. While the final point differential does not compare to what OKC did to a team like the Bobcats earlier this season, the difference between the two teams on this particular night was probably not that far off. The Thunder played the Lakers even through about 16 minutes and then gradually increased the temperature, and a tie game turned into a 16 point halftime lead. From that point on, the Thunder merely had to play keep away while the Lakers flailed about.

The Thunder were led by Kevin Durant, who finished with 42 points, 8 rebounds, and 5 assists. Durant collected 4 3-pointers on the night and was seldom challenged in his conquests to produce points. Durant was joined by Russell Westbrook, who once again proved that the Lakers have absolutely nobody on their roster who has the ability to slow him down. After a slow offensive start, Westbrook turned on the jets in the 4th quarter and finished with 27 points, 10 assists, and 7 rebounds.

The Lakers were led by Kobe Bryant, who finished with 28 points on 8-22 shooting. Veteran reserve Antawn Jamison finished with a double-double, collecting 19 points and 10 rebounds.

Respectfully, we knew that the Lakers were hardly at full strength on the night, missing Pau Gasol, Dwight Howard, and Jordan Hill to injury. However, it would not have mattered because on this night, Kevin Durant decided to take it to the Lakers from the outset.

Think for a moment how rare that notion has become, where Durant is an early aggressor on offense. These days Durant spends the first half of most games setting everyone else up. Tonight however I was shocked to see that Durant had 25 points at halftime, made most of it look easy, and could have gotten 50 without breaking a sweat had he wanted to (and a 60 point night was not out of the question had KD had to do it).

It was honestly a breath of fresh air to watch the game's best scorer go out and do what he does best. I think it is an element, the most important element actually, of his game that has been missing. I understand that Durant wants to be a complete player and help control a great offense, but often times, he is the best scoring option on the court and he needs to take advantage of it, especially when he is dealing with a team like the Lakers.

What is perhaps the most ironic about Durant's scoring night tonight was that he wasn't even a shot-hog. He took only 25 shots to get to 42 points, and as I mentioned, probably left 10-15 on the table because he played so passively in the end. Durant is truly remarkable.

The Thunder applied an interesting tactic in tonight's game, riding Durant's offense through 3 quarters and then turning to Westbrook in the 4th. This scenario is a bit of a flip-flop from how things ordinarily work, with Westbrook normally doing a lot of the early heavy lifting and then Durant closing. On this night however, it was the perfect combination.

Durant led off by scoring 40 points through 3 quarters, effectively punching the Lakers so that they were swaying on their feet. With the game nearly decided but still plenty of time left, the Lakers cut the lead to 16. At this point, Westbrook took over and displayed once again that L.A. has absolutely nobody who can stay in front of him. Westbrook drove the ball to the rim again and again in the 4th, scoring 10 of his 27 points, and his finishing touches finally knocked out the Lakers.

Aside from the fact that Durant and Westbrook combined for 69 points and made most of it look easy, the Thunder once again used very good defense to shut down L.A. The Lakers shot only 39.8% from the floor, taking nearly 100 shots on the night and only making 39 of them. OKC also held the Lakers to 6-28 from 3-point range, so even when OKC was playing for the drive, the Lakers were not making them pay by hitting shots from long range.

The Lakers do not have good team quickness, and as a result do not get a lot of dribble-drive penetration. Aside from Kobe, nobody on the team can consistently attack the rim and produce points. As a result, the Thunder had a very easy job defending the Lakers because they were almost always able to keep the Lakers in front of them. With the exception of Steve Nash's high pick and roll play with Antawn Jamison, there was very little that the Lakers were doing that OKC did not immediately recognize and quickly shut down.

While I am hesitant to write off a Laker team that was missing so much of its core on the night, I think this game still demonstrates that the Thunder have lapped the Lakers and L.A. is not at the same level as the Thunder. More importantly, OKC reinforced the fact that they do not even need to play great basketball to beat L.A. For a second consecutive game against the Lakers, the Thunder as a team were....solid. Not bad. They shot over 50% from the floor, but were careless and not very good from 3-point range, shooting 9-29 on the night. They missed an uncharacteristic 9 free throws. They committed 17 turnovers against a poor Laker defense. Yet despite all of that, it was easily apparent that L.A. had no shot at winning, and even more disheartening for L.A., the Thunder really only need 1 guy playing well at any given time in order to win handily.

In the first half and halfway through the 3rd quarter, Durant carried the day with his hot shooting. When Durant cooled off, Westbrook took over and took off. Only sporadically could you say that the Thunder offense was really 'clicking.' Most of the time it was just Durant or Westbrook controlling the game. Not only was it enough, it was more than enough, so thoroughly were the Lakers outclassed on their own court. 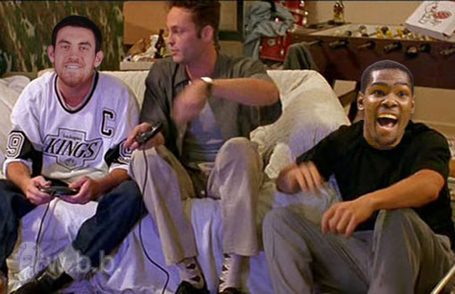