OKC Thunder easy to love while L.A. Lakers are easy to hate

Share All sharing options for: OKC Thunder easy to love while L.A. Lakers are easy to hate

Before I get into the meat of this post I figure this is a good chance to introduce myself to the readers of Welcome To Loud City. This is my first of what I am hoping are many more posts for WTLC about the Oklahoma City Thunder.

So now a little bit about me. Currently for my day job I am a minor radio personalty for Sports Radio 810 WHB in Kansas City where I sit, press buttons, and stare at Twitter all day. I have been a huge NBA fans for many years and it has became very clear that my dream of having a NBA team make KC their permanent home for me to cover and report on is dead and gone. So the next naturally progression for me was to look toward the west in the direction of the OKC Thunder.

I should warn you that I love lists. I love reading lists and rankings of pretty much anything. Top movies, albums, TV shows, NBA teams, NBA players of all time. You name it. Put it in a list and throw up a link to it and there is a 90% chance I will be clicking on it.

That being said list get to my list and we will start with the OKC Thunder and the ten reasons why you have to love the Thunder. 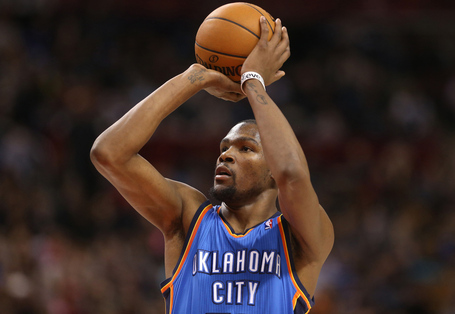 How can you not love KD? It is virtually impossible to not love the Durantula. He is a great player who is as humble as he is great. And he is freaking great. While other players are chasing the max deal in major markets KD decided to stay in OKC and build something special. That is exactly what he has done since signing that extension. He is destined for NBA greatness. It is not a matter of if he will win an NBA title but when. 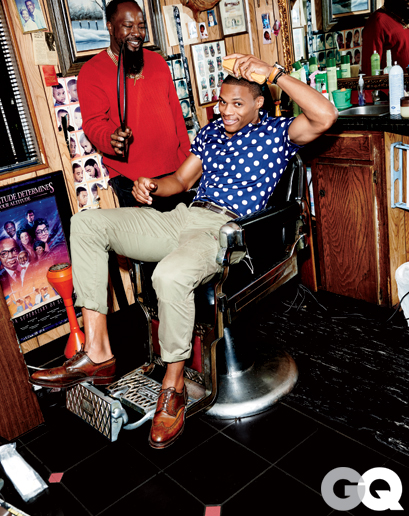 Russell Westbrook seems to be one of the more maddening players for OKC fans. Personally I love his game and what he does at the point guard position. He is a new breed of point guard that is super fast, athletic, shoots, scores and shoots some more. I get annoyed with idea that since Westbrook is a point guard he needs to be the same kind of point guard as Chris Paul. That is square peg round hole type thinking and not understanding the elite talent that is Westbrook.

Now that we got that out of the way stuff out of the way. How can you hate someone who has enough swagger to rock the clothes he does after games. I mean the dude rocked some Sally Jesse Raphael type glasses one night. 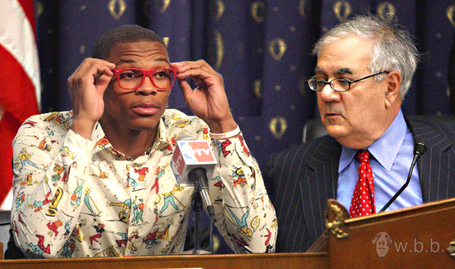 Who does that? Russell Westbrook does that.

When you compare the Thunder to the Lakers, one of the biggest differences in the franchises this season how the teams were built. The Thunder are built the way every GM dreams of building their team. Hitting on high draft picks that turn unto superstars, finding gems in later rounds, and smart free agent signings. Having top five picks year after year is good and all but if you don't make the right selection then you will keep finding yourself selecting at the top of the draft. And if you are a GM you will soon be out of a job.

Thunder were very fortunate to have Kevin Durant sitting there with the second pick in the 2007 draft after the Portland Trail Blazer took always injured Greg Oden. But the Thunder also made the right selection the next year when they took Russell Westbrook at number four. I will be honest I scratched my head when that pick was made mainly because they drafted Westbrook to play point guard. Turns out they were right and I was just dumb. Then the next year in 2009 the Thunder made another smart pick when they drafted James Harden. Shocking to no one at all after hitting on all of their top five draft picks they have not had to pick up there since. Amazing how that works.

The Thunder have also been successful in the trade market. With the exception of the James Harden trade they have won most of the trades they have made. The James Harden is a loss in my book because there was no reason for that situation to ever get to the point where you had to trade him. We can discuss that topic in more detail at a later time.

The Thunder are not in the business of flashy free agent signings and trying to assemble a great team on paper. They are about assembling the best team on the floor and it has shown over the past two and a half seasons.

I went to a Thunder home game their first season in OKC when the team wasn't very good. They lost 59 games that season including a 14 and 8 game losing streaks before Christmas. When I ventured to OKC it was in early January for a game vs. the Houston Rockets and I could not believe the energy that was in the arena before and after the game. That kind of passion the fan base showed that evening has not waned since they came to Oklahoma in 2008.

KD has the best commercials among professional athlete out right now. It started with the Doodle Jump. Then came the commercials/webisodes with the very lovely Kate Upton. And the latest one with him out growing the pajamas just adds to the commercials legacy for young KD. My wife and I laugh every time we watch Durant pulling the leaves out of the gutter. Speaking of Kevin Durant...

Look, I am almost 30 and I still rock a backpack. I love my backpack. I tried the one strap briefcase types bags and it just didn't do it for me. Backpacks are amazing and KD knows it and he rocks he hard. And in true Durant fashion when asked what is in said backpack it was headphones, chargers, and a bible. If it is good enough Kevin Durant and Josh Lyman then it is good enough for the rest of us.

I mean come on...He makes sure to give his mom a hug and kiss after every home game. 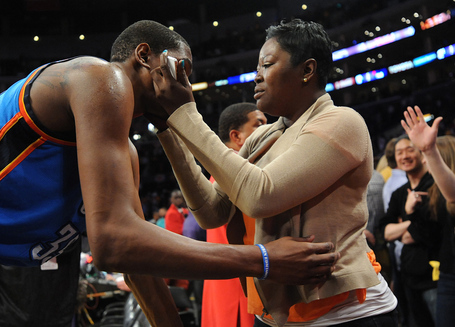 I wish there were more professional athletes like Nick Collison. He is smart, engaging, and very funny. If you don't follow him on twitter you are missing it @nickcollison4 and if you don't read the feature he writes for GQ Magazine then you are really missing out. Get better at life and start reading anything Collison decides to type. Even if its as small as a tweet.

No joke my dog's name is Martin. He is named Martin after Kevin Martin. I am completely serious about who my dog is named after. Now in full disclosure I am fan of the Rockets and when my wife and I adopted Martin back in 2011 I named him after Houston shooting guard because I felt they shared some characteristics. Mainly being that Kevin Martin has a very awkward, nontraditional jumper and my dog Martin is very awkward. He is 90% legs and is very uncoordinated to boot. If you need proof see below. 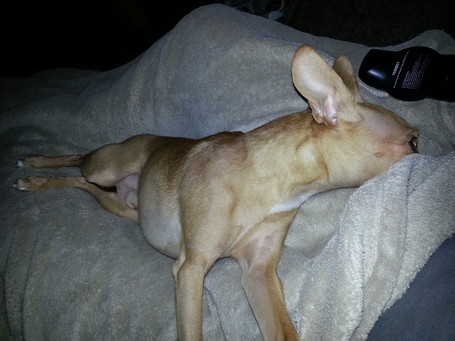 I mean that pretty much speaks for itself. I will add that he has a very particular skills. Skills he acquired over a very long career. Skills that make him a nightmare.

So it is clear the Thunder are very likable. You know who isn't very likable? Those damn L.A. Lakers that is who and here are ten reasons why.

I know for a year and a half LeBron James was kind of the most disliked player in the NBA but come on. We all know that the most disliked player in the NBA is Kobe Bryant. It is very easy to root against Kobe in every game he plays. From the glares at refs, flaring the nostrils, to the antics on the court. To quote Dave Chappelle from the Player Hater's Ball sketch "Hate! Hate! Hate!"

Remember last season when we had to deal with the whole Dwight Howard wants out of Orlando. Then he wanted to stay then he wanted to leave and then he got his coach fired. Then he signed an extension for one more year. Then he wanted out again. Then he was traded to the Lakers. This season has not gone the way the Lakers have hoped and now there are reports of a rift between Howard and Bryant. The team and players are down playing the report but this adds to the legacy that Dwight Howard is amassing as a bad teammate.

4. They Are Not The Best Team In Los Angeles:

Well they aren't. The Clippers are so much better than them this season.

Purple and gold? Really? Could they be anymore pretentious? Answer to that question is yes. They are the Lakers after all.

Okay we get it. Your team is in L.A. and a lot of actors live there and come to games. Do we really need to keep seeing Jack Nicholson every game?

He always looks like he is about to cry. He looks like Carrie Matheson while she is crying and sucking on a lemon. And his facial hair/neck beard is something that needs to be corrected immediately.

At first they were fun and I enjoyed them. Now they have gotten completely out of hand and need to be stopped. I have a feeling he won't be celebrating much later this evening.

9. They Think Everyone Wants To Play There:

Laker fans are already talking about how LeBron can opt out of his deal and that he could/will be taking his talents to the left coast. I wonder when they will learn that not everyone is ready to run over their mother to play for their team.

Hope you enjoyed and I look forward to the next time we meet. I am planning on doing a weekly post of player grades along with a couple other things Thunder related. I am always open to feedback and if there is any topic you want to see discussed just hit me up on twitter @craig_a_brenner.

A disclaimer on my twitter handle. I tweet a lot about Kansas City Sports, the NBA in general, lots of pop culture stuff and comic books. I am pretty active during games so feel free to hit me up with any questions you have. I might even start doing posts where I answer different NBA related questions since that seems to be a popular thing these days.

Until we meet again peace out.