There are a multitude of moments that we experience following the Thunder. Here are 5 of the smaller moments that remind me why it is so special to be a fan of this game.

Share All sharing options for: Thunder 2012: Sherman's top 5 small moments of the year

The Thunder reached the NBA finals for the first time in OKC's history, so for certain there are a number of big moments to commemorate the event. However, the NBA season is so long and filled with so many twists and turns that we are often confronted with a number of small moments, throw-away moments, that somehow are able to encapsulate why it is that we love the game and this team so dearly. Here are my top 5:

The Thunder have a plethora of offensive talent. Obviously. Whether it was Kevin Durant, Russell Westbrook, or James Harden, they had 3 different guys who could get 30 points on any given night. Even Serge Ibaka could get 20+ points on a good night. With that kind of talent, there are precious few extra shots to go around outside of garbage time.

Daequan Cook, the backup shooting guard, had gradually fallen out of the Thunder rotation after Derek Fisher arrived. Much to my own disappointment, I felt that OKC had marginalized a key component of their bench attack, and Cook had little impact during the playoff run. However, for one game, a game that was largely meaningless, Cook stepped ahead of Durant, Westbrook, and Harden and won a game for the Thunder.

In a closely contested game against the Kings' starters, Cook scored 19 points in the 4th to propel his team to a win. There is nothing like watching a perimeter player in the NBA catch fire for a prolonged period of time, and for 12 minutes we were treated to sharp-shooting mastery. The fact that it was Cook made it all the more memorable.

LeBron James, Durant's on-court nemesis and the vanquisher of the Thunder in this past year's Finals, received all of the accolades last year. Most recently, he was named the Sports Illustrated Sportsman of the Year. Not surprisingly, the SI piece on LeBron was filled with complimentary stories that helped shape the legend of LeBron. However, buried in that lengthy piece is one place in particular where LeBron offers up his compliments of somebody else.

"I know there is someone, somewhere, trying to take my spot...And I know where he is too. He's in Oklahoma. He's my inspiration because I see the direction he's headed, and it's the same direction I'm headed. I know his mind-set, and he knows mine. It's a collision course. We're driving one another."

LeBron is sitting at the top of the world. He has worked very hard to get there, and he has earned it. He also knows that there is one guy who can knock him off of the throne, and that guy does not live in New York or Los Angeles. He lives in Oklahoma.

LeBron has described for us the perfect sports symbiosis, one that we as fans dream about. It is when the best player on the planet knows that there is another out there like him looking to supplant him. The other chases him relentlessly, improving by the day. The fear of that challenger forces the best player to become even better. It is an arms race, but in this case, everybody wins.

This moment did not take place on the court, but rather in a TV studio. Fresh on the heels of winning a gold medal, travel-weary Durant and Harden decided to stop by the Jimmy Fallon show to talk a bit about the Olympic experience as well as how the players view the upcoming season.

Unsurprisingly, the topic of discussion soon turned to the Los Angeles Lakers, who had just recently announced the acquisition of the big fish Dwight Howard. Fallon wanted to know, did this tip the scales in the Lakers' favor? How does it make the Thunder guys feel? What is their response?

It was a perfectly condensed moment of subtle defiance. Cede nothing. Ever.

Technically this happened at the close of 2011, but it was such a special moment that I'm including it here. If you're wrapped up in some of Russell Westbrook's offensive struggles this season, just know that it has happened before and he shook out of it. What you may not know or remember is one of the key turning points that triggered Westbrook turning back into Westbrook.

The game was against the defending champion Dallas Mavericks, and the Thunder were in a tightly contested game. Up to that point in the season, Westbrook had struggled greatly with his offense, actually posting an 0-13 shooting outing against the Grizzlies the game before. He was struggling again on this night and his detractors were likely cataloging all the evidence they needed to indict Russell for his play. With the game finally knotted at 91 with but a few minutes to play, Westbrook saw opportunity to redeem himself.

After a defensive steal, Westbrook had the ball on a breakaway and was looking to give the Thunder the lead. Unfortunately, Mavs guard Jason Terry made a play on him and pushed Westbrook from behind. Westbrook made an awkward looking basket and then tumbled into the stands. He had made an amazing play to give his team the lead, but was he ok? Would Westbrook regain his composure?

And that is when it happened.

From the deep recesses of the Chesapeake Arena, the chant began.

As Westbrook's teammates scooped him out of the stands, 18,000 devoted Thunder fans figuratively reached down and picked up the struggling Westbrook as well.

Coach Scott Brooks said, "I've never seen in my NBA 20-something years what the crowd did. They knew he was struggling. He struggled, and they were chanting his name...This is a special place to play. I've never seen it before. That's what being a team is always about."

"It's amazing what these fans will do for you."

Knowing that Westbrook understands this special relationship between the fans and himself, that they would pick him up when he's at his worst, perhaps it is not so difficult for us to understand why he competes so passionately for them.

The year was full of Thunder highlights, so naturally the NBA put together a pretty good one featuring Kevin Durant. We've seen all of these plays a dozen times and will likely watch them a dozen more. However, I like this one because it captures something very small but very cool. Check it out.

If you pause the clip right around 1:07 you see this woman: 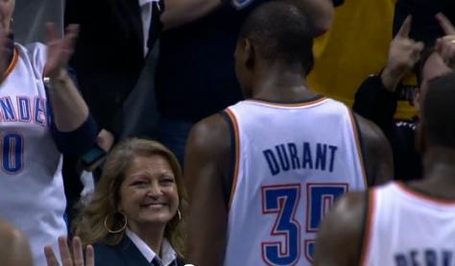 Who is this woman? I don't know, and we probably never will know her name. What we do know is that she is likely an employee at the Chesapeake Arena, because she is standing with her back to the court when Durant begins his spinning, insane and-1 play. Maybe she is part of the security detail or a seating attendant, and if so, she likely gets to see this team play around 50 times a year. She turns to the action right as Durant is finishing his crazy shot, and this woman starts smiling.

No, smiling is not strong enough a word. This woman is BEAMING. She looks like she's witnessing her own child or grandson doing something special for the very first time, and the joy is simply radiating out of her face. She's beaming because of Durant the player and because of how Durant the player makes 18,000 people feel all at the same time. I wouldn't be surprised if Durant has taken the time out of his day to meet this woman at some point, because that's just the kind of thing Durant tends to do. Maybe there is a personal connection that goes along with the basketball connection.

Regardless, the chance to witness the unfolding greatness of Durant and his team is a special experience that does not come along very often. It is the greatness that goes along with singular names - Bird, Magic, Jordan, Kobe, Duncan, LeBron. Now Durant.

Soak it in, and if you ever find yourself getting bored or jaded with the NBA, recall this woman's jubilant face and remember that there is good reason to smile in 2013.