What in the blue blazes this? Find out inside.

Share All sharing options for: First look at Kevin Durant's new 'What the KD IV' shoes

Kevin Durant is well known for sporting some of the best-looking sneakers that Nike has to offer. Currently Nike is unveiling its new signature line of "What The" shoes, and Durant's shoe falls in line with Nike's previous release of both the "What the LeBron 9" and "What the Kobe" (replete with a mamba on his heel, no joke). As he has in the past, Durant snapped a pic of the shoes himself and the Internet immediately gobbled it up.

These asymmetrical stylings are a new direction, and Durant's new shoe, which looks like it fell right out of Willy Wonka's Chocolate Factory, falls in line with that direction. 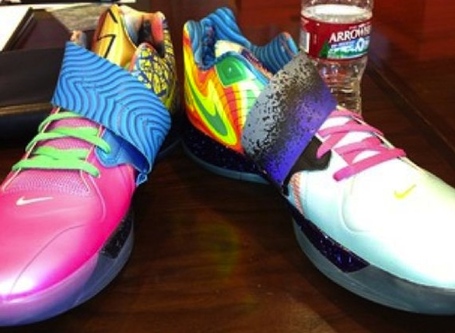 While the precise release date is currently unknown, Modern Notoriety has this to say about the shoe's new artistic direction:

Rumors are saying end of 2012 for this shoe, so keep an eye out.