After defeating the Australians, Kevin Durant had the same thought that anyone else would have. A tour of a mid level paper company would be soothing. A salve to the strained muscles of my soul. He spoke with Harden and Westbrook, and after some deliberation they all agreed. This must happen and it must happen now. Paper waits for for no man, and Wernham Hogg Paper Merchants is of no exception. 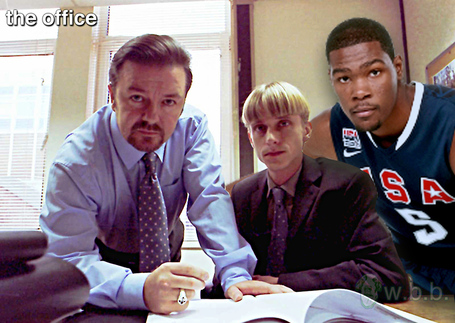 Kevin Durant simply loves sales calls and invoices. Especially invoices. They offer him the ephemeral sense of being one with the universe. Don't question him on this. He just likes it, so let it go. He gets a little touchy when it's brought up. After an exciting hour of looking over paperwork, the trio from Oklahoma City decided that their field trip needed some spice. Continue on after the jump to experience the power and the glory. 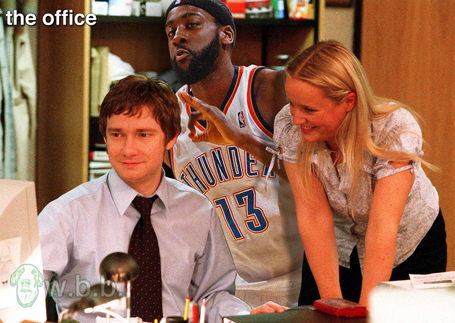 While KD was immersed in a wonderland of analytics and inventory data, Harden was hanging out with the office's cool crowd. Always the social butterfly, he fit right in. They chatted about things for a while before the topic wandered over to their boss. David Brent. Harden had thought something was up with that guy, but kept it to himself. At this point Dawn felt she should warn him. There would be awkward guitar playing. There would be dancing. It would be weird. He wasn't sure what to think, and then this happened. 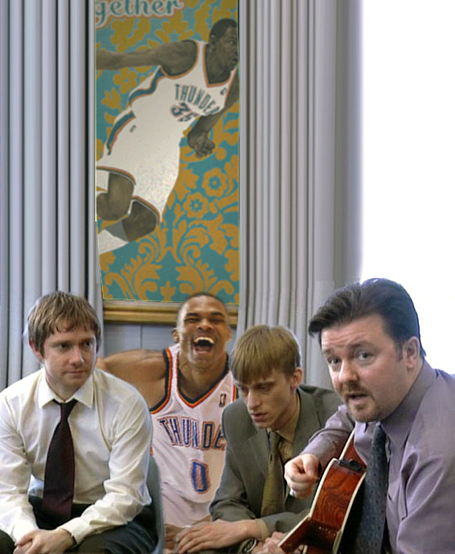 Harden thought he heard the soft strumming of a guitar. Could someone really be playing a guitar in such a seemingly bland office? It slowly grew louder. Then it happened. It was Westbrook, wailing like an angry donkey. It was Matthew Wilder's "Break My Stride". He loved that song and to hear it in this rendition, in this environment, broke his heart. He sulked over to a corner and slowly made his way to the floor. Like a dandelion taken by the wind, his emotional state was scattered into so many pieces that slowly drifted to the ground. He sat their the rest of the day in agony only to witness the coming storm that was on the horizon. 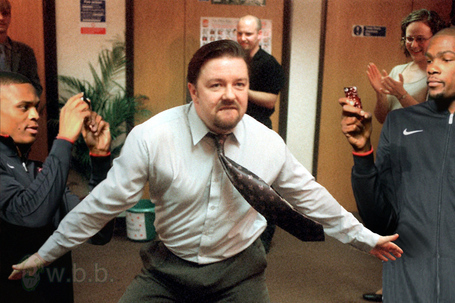 At first, Durant and Westbrook had no interest in dancing. This man, David Brent, was clearly a moron. They wanted nothing to do with him, but they very much wanted video of what was happening. It would be Twitter gold. The music, "Free Love Freeway", was hypnotic. Like eating pizza rolls, it was a law of physics. Kevin Durant and Russell Westbrook had to dance. 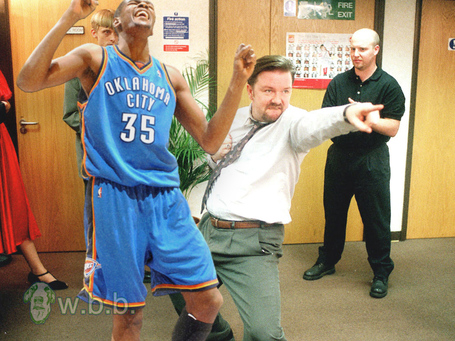 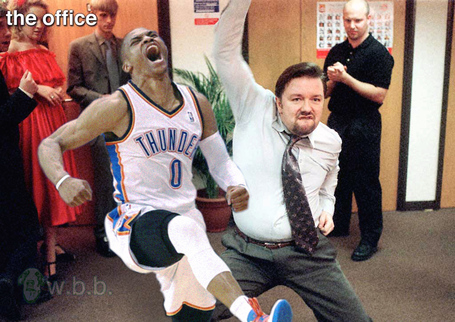 Russell isn't much of a Dave Matthews Band guy, but he's a big fan of the Cold Crush Brothers. Put them on the stereo and he just goes at it like a wild man. Check back tomorrow to see where Kevin, Russell, and James head to next on their Grand Tour.