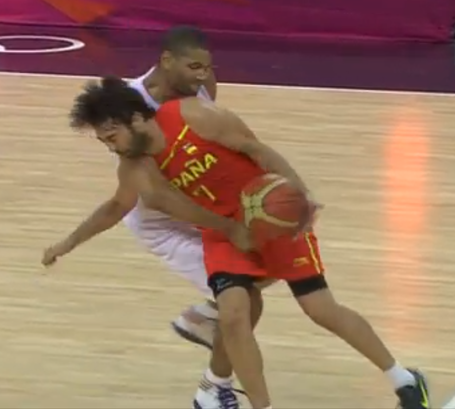 .GIF of the Incident is HERE
All I gotta say about this one is, "Ouch." As you can see in the image above, Nicholas Batum punched Juan Carlos Navarro in the you-know-where. Did Juan Carlos Navarro have it coming? Well, both teams were flopping extensively, and it's arguable that a flop won the game for Spain. But what more likely caused the frustration was France's 11 straight missed shots up to that point, and the stifling defense Spain was playing in the paint. Batum wasn't having a great night either, shooting only 25% from the floor. The foul came after an equally rough foul from Ronny Turiaf, who straight up shoved Rudy Fernandez into the scorers table, possibly injuring him.
But what's amazing about this is that Nicholas Batum was allowed to stay in the game after this. In the NBA, he'd be immediately ejected and probably forced to sit out one or two games. But in FIBA, things are hardcore. As Carmelo Anthony should know after getting assaulted in the same area by some guy from Argentina's bench.