When they're not dominating on the court, how do the Thunder's trio of Westrbook, Durant, and Harden spend their time abroad? Like all distinguished young men of their age, they endure the time honored tradition of the Grand Tour. This shouldn't seem far fetched. All three men are of impeccable style and elegance. This is not a statement of opinion, it is fact. James Harden regularly wears a bow tie. That statement alone clearly demonstrates as much. For their first of several field trips while in England, the bon vivants visit Downton. Jauntily, like all young men of distinction do. 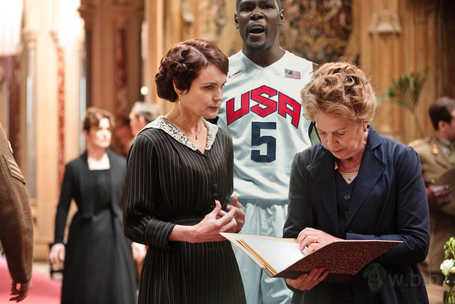 Upon their arrival, Durant presents Cora, Countess of Grantham, with a beautiful leather bound stat sheet. For more visions of grandeur, continue on after the jump. 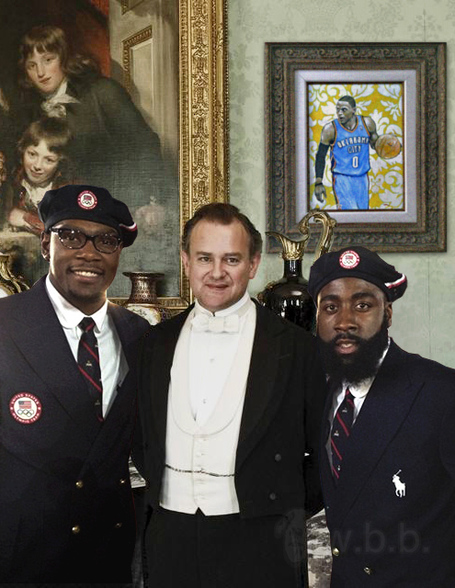 Here we see Durant and James Harden with Robert Crowley, the Earl of Grantham. Harden calls him Bobby Earl. He's cool with him like that. With the understanding that Durant had presented a gift to the people of Downton, Harden, ever the gentlemen, did as well with this painting of Russell he acquired in Oklahoma City. It has a lovely baroque look that adds to the refined feel of Downton. 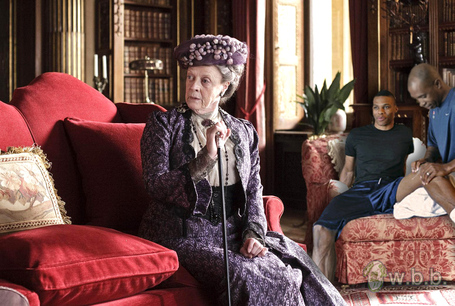 While Harden and Durant are hanging out with the Earl, Westbrook thought he'd spend some time with the coolest person on the planet. She is a cornucopia of awesome and her name is Violet. She is the Dowager Countess of Grantham and she doesn't have time for your nonsense. The level of intimidation coupled with the enduring charm that radiates from her very presence is nothing short of spectacular. Russell sees her as something of a mentor. 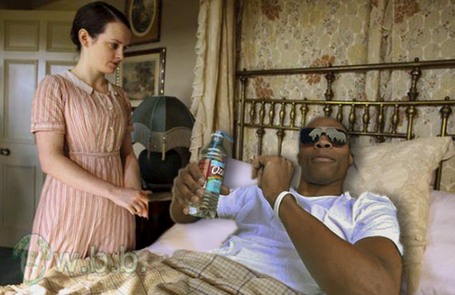 As the day winds down, Westbrook enjoys the meticulous service of the staff at Downton Abbey. They found some Ozarka for him, and for that they will always hold a special place in Russell's heart. Check back tomorrow as the Grand Tour continues with a trip to Slough to tour the Wernham Hogg Paper Company.