Team USA finished the preliminary round 5-0, but not after receiving a scare from both Lithuania and Argentina. While they have yet to truly play a 'close' game, there are still basic concerns about their offensive game plan and their defensive attention span.

Stay on top of all player movement and rumors by checking out SB Nation's stream throughout the day.

What a novel concept - the two best players in the world actually play well together.

Scenes from the Aquatic Center | Grantland

Durant: "You look like a guy who has been looking forward to going to Dave & Buster's all week."

"I think it's really helpful for them to play under different circumstances; it only rounds them out as players and makes them better."

Yeah, this happens to me all the time.

That’s the thing with Russell Westbrook — he completely turns that archetype on its head, just as democracy and participatory government turn the tyrant’s world upside down.

Young writes that James Harden is pretty confident that the Thunder are going to find a way to keep him. I think though that when it comes down to both Harden and Serge Ibaka, Harden is the easier of the two.

I agree that the Timberwolves had an intriguing offseason, but it is it enough to add 15 wins to their win total and put them in playoff contention?

The Jazz have a new GM, and teams continue to catch on that the Spurs understand things in a way most franchises do not. 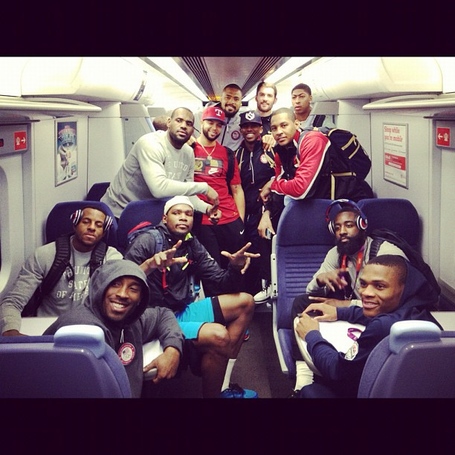