Sometimes in life, when it's the offseason and you've finally grown tired of making awesome Foot Locker commercials and playing the occasional game of NBA 2k12 or the Ochocinco approved Fifa, you just have to go and ride a shark. That's what winners do, and James Harden and Russell Westbrook are the Billy Ocean of winners. Don't lie, you know that "Caribbean Queen" is your favorite song. There's no shame in admitting it, only victory and sharing the same dream. With this in mind, of course James Harden and Russell Westbrook would ride sharks on Friday of Discovery Chanel's Shark Week. Who doesn't ride the shark because they're under the impression that they're too cool to ride a shark? Kobe Bryant and people that like to call themselves "Superman" that aren't named Shaq. They just bounce around in the water, sipping girly drinks with crazy straws (full disclosure, that would be kind of cool). That's why they get harassed by James Harden, Russell Westbrook, Harden's tearaway beard "Floyd the Destroyer", and their shark friends Laverne and Shirley. Where is Kevin Durant while all of this is going on? Find out after the jump, because there will be Falcor and glory. 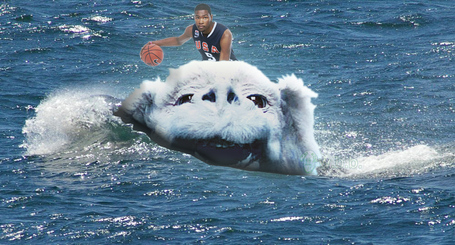 It's just KD, cruising around the ocean and whistling the chorus to Hall & Oates "Rich Girl" with his good buddy Falcor. If this doesn't put you in a good mood, I don't want to know you.