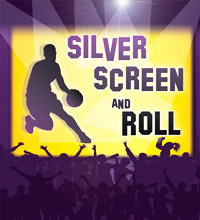 We at WTLC have been watching with rapt attention the Western Conference landscape shift. The Lakers, whom we thought dead and buried but a few months ago, rejuvinated themselves in one of the most fantastical and yet so-very-Laker-eque ways possible - by adding one of the best point guards of the current generation and then adding the best big man in the NBA.

Barring any unforeseen missteps, it is likely that the Thunder and Lakers will be on a collision course all season long. To get the discussion started off right, we turn to C.A. Clark of Silver Screen and Roll and offer up some questions for him to entertain. In turn, Clark asked me a few questions as well, so please jump over to SS&R to see how we answered them.

We've had some good discussion with Clark in the past, so if you would like to revisit a past Q&A, go HERE.

1. Aside from the general sentiment of elation for landing the big fish, what do you think are Lakers fans' general reaction to landing Howard a few months after acquiring Steve Nash, and how rational do you think these reactions are to the reality that will likely play out?

Honestly, in the wake of not one, but two, earth-shaking moves for big name players, I don't think it's fair to even discuss the rationality of any fan base. I would say that nine out of ten Lakers fans expect a new regime of dominance and championships at the moment, which is not a rational assessment of a team with so many unanswerable questions. However, I would challenge any fan base to deal with these developments any differently, except there are few fan bases who have ever had the opportunity.

2. Tell me if you agree with me: a year ago, the Lakers could not beat the Thunder because a) LA had no reliable outside shooting, which allowed OKC to sag into the lane to stop Bynum/Gasol; and b) LA had no reliable perimeter defense to keep either Durant or Westbrook out of the lane. To what degree do the Lakers' additions correct these shortcomings?

Your first point, about reliable outside shooting, has been true since 2008, when Sasha Vujacic had one (apparently miraculous) consistent season as a 6th man and other guys (Derek Fisher in his last good shooting season, Vlad Radmonovic (traded mid-season), and Jordan Farmar) kept defenses honest. The Lakers were ranked sixth from the perimeter that season, but have since gone 19, 23, 17 and 25. Even in the championship winning seasons of 2009 and 2010, the Lakers won titles, in part, thanks to a lucky upsurge in three point shooting at just the right time. So yeah, outside shooting has been a problem since forever.

It's a need they most certainly have addressed. Steve Nash alone represents a huge upgrade. I'm throwing out superlatives here, but he might be the best shooter to ever don the Lakers uniform. The Lakers also picked up Jodie Meeks (career 37% from 3pt) and Antawn Jamison, who is only a 34.5% distance shooter for his career, but who has never been in a situation where he will be the 4th or 5th option offensively either. He's had a couple very solid seasons from distance which corresponded to the seasons in which he was surrounded by decent talent. Now he'll be surrounded by tons of talent, so there's hope for a very good outside shooting year from him. And then there's Kobe. Kobe's shooting the last three years has been horrendous. But, he's roughly 800 times more effective as a distance shooter off the catch when he has time to set his feet. IF he reins in the pull up threes (see next question), he too can keep the defense honest with Nash running the show.

As for the perimeter defense, that question is really all about Westbrook. Ron Metta World Artest Peace is still a very solid defender, and while Durant was very efficient against him in the Thunder's 5 game win, he's been less effective against the Lakers throughout his career, last (regular) season included. I'm not ready to say Durant has Artest handled off one five game sample. For the Lakers and Thunder, the key has always been Russ (and Harden).

From a perimeter defense perspective, that issue hasn't been addressed at all. If anything, it has gotten worse. Steve Nash is not a good defender, and he never has been. But, what has been upgraded is the Lakers ability to deal with Westbrook WHEN (not if) he gets past his man. With Howard as an eraser in the paint, Westbrook will more often have to turn to the mid range jumper. He's proven many times that he can be lethal from that distance, but it is still the most inconsistent aspect of his game. If Russ is hitting that pull up shot, he can't be stopped by anybody. But if he's not hitting that shot, the Lakers are now in a much better position to defend him.

3. One of the big questions for the Lakers this year will be chemistry - how will Nash, Kobe, Pau, and Howard mesh together. How do you think this issue will play itself out? Will we see a 2008 Celtics' Ubuntu-like cohesion, or will it be closer to the 2004 Lakers who acquired Hall of Famers Gary Payton and Karl Malone and then experienced a rocky road before flaming out in the Finals?

I don't know that I expect Ubuntu (which takes a Kevin Garnett type to drive that I don't think the Lakers have), but the 2008 Celtics more closely resemble the mold of this team than the 2004 Lakers do. You have to keep in mind that all the chemistry issues involved with that 2004 squad were pre-existing: Shaq and Kobe had been having issues for years. Payton and Malone didn't create the problem, and by most accounts, weren't a part of it either. Payton just kind of did his thing without saying much, and Malone (who I loathe more than any other NBA player) was a verifiable saint in the locker room.

This year, Kobe and Pau have (reportedly) had some issues, but Pau is not the kind of player to hold an grudge and their embrace after the Spain-USA Gold Medal game appeared plenty genuine. Kobe had plenty to say to Pau which, based on the look in Kobe's eye, I take as saying (and I hate playing this game), "we have a chance to be special, and we all have to adapt to make it happen, so let's get it done". Kobe knows how good Gasol can be, and I have high, high hopes that the combination of the new blood and a reinvigorating Olympic tournament will bring Gasol back ready to show some old success. And the bottom line is that Gasol is simply not high enough in the pecking order for a chemistry issue with him to matter all that much.

The rest of the issues all surround Kobe. Can Kobe handle being (clearly) not the best player on his team? Can he relinquish primary ball-handling responsibility to Nash? These are questions nobody will know the answers to, but I have full faith that Kobe can make it work. For one, this team gives him a chance to go down as one of the winningest players ever. If the Lakers can knock out another couple championships in the next few seasons, he'll have as many or more rings than anybody who didn't play for Boston in the sixties. He has to know the type of team effort that will take, and Kobe has shown in the past a willingness to share the ball with teammates he deems worthy. Now, nearly all of his teammates qualify. Not only that, Kobe's tried to do more the past couple seasons, and he's seen the results. I'd be highly surprised if we see a repeat of his ridiculously high usage rate next season. And the other thing is, even though Kobe will have to share more of the spotlight next season than he has since Shaq was in town, nobody is competing with him directly. Dwight Howard (assuming full health) will be the team's best player, but so much of what makes him great is on the defensive side of things. Steve Nash will be the team's primary ball handler, but Nash lives to create for others. Kobe will still be able to lead the team in scoring, still be the primary option in crunch time, and he'll be able to do all these things within the context of the offense. If you were to create a team with so many stars on it with the express purpose of it being a team that Kobe Bryant could successfully be a part of without having to change his game too much, this team would be it.

4. What is your early prediction for the regular season record and seeding?

So much of that question depends on the health of Dwight Howard. If Howard can't return until after the season starts, and the team has to learn how to incorporate all these pieces on the fly, my guess is the Lakers will be somewhere in the mid to high fifties, well behind OKC in what is clearly a two horse race. If Howard is ready from the get go, and the Lakers have a full training camp to figure out questions on defense, it's hard to see the Lakers as anything less than a 60 win team. Of course, it's hard to see the Thunder as anything less than a 60 win team under any circumstances. I'd be (a bit) surprised if the Lakers manage a better regular season record than the Thunder, and surprised if anybody else in the conference comes close to either team ... (remembers past two regular seasons) ... OK, the Spurs will come close. No matter what, it should be a fun race.

Many thanks to C.A. Clark for his thoughtful answers. Be sure to check out Silver Screen and Roll to get the Laker perspective.