Share All sharing options for: Q&A With the UConn Blog: Hasheem Thabeet 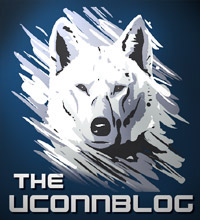 Last week the Thunder unofficially agreed to sign a 2-year deal with former #2 overall pick Hasheem Thabeet. While the acquisition was not a surprise since Thabeet came on the cheap, many Thunder fans have wondered what the Thunder front office's continued fascination with Thabeet has been.

Now that he's practically part of the team and likely the 3rd string center, we want to know exactly what we have and where Thabeet's potential lies. To accomplish this, we decided to go back and take a look at the last time Thabeet was an impact player, which was during his junior year in collegeas a member of the UConn Huskies. During that final season of Thabeet's career, he averaged 13.6 points, 10.8 rebounds, blocked 152 shots, and was a key player in that 2009 squad's Final Four run. He was the Co-Big East player of the year (joining Pitt's DeJuan Blair), Big East Defensive Player of the Year, and for the 2nd year in a row was named National Defensive Player of the Year.

To get a closer look at a time when Thabeet was considered a can't miss pro, we turned to Justin at the UConn Blog. Here are his answers to our questions on Thabeet.

WTLC: You guys know better than anybody who Thabeet the player is. What did you see of him during his 3 years in college, and what happened to that player after he got drafted?

UConn Blog: Not that much. Anyone who watched Thabeet in college would tell you he was drafted far too high. He was a dominant defender, sure, but much of success seemed to be a product of his size advantage, and later, his experience. He was still relatively new to basketball in college, but he never showed a great feel for the game.

WTLC: Some of the assessments we've heard during Thabeet's time in the pros has been: a) he has never had good 'big man' coaching, which has stunted his growth; and 2) he seems more infatuated with the star athlete lifestyle than in improving his performance. Can you assess the veracity of both of those points in light of what you saw from him in college?

UConn Blog: The latter probably has more truth to it than the former. Thabeet seems really kind at heart -- he takes pride in representing Tanzania and he was always pretty thoughtful when I dealt with him in interviews for the campus rag -- but he did enjoy the celebrity aspect of his position. I remember seeing him in sunglasses during a Spring Weekend event. In the middle of the night.

But UConn was once known for its big men. Emeka Okafor, Josh Boone, Hilton Armstrong were all first-rounders (which might also explain some things with Thabeet), and the program led the country in blocks for about a decade. So, not sure if I buy that coaching was the problem.

WTLC: Thabeet is now the 3rd string center on a championship contending team. What do you think his chances are of making an impact in Oklahoma City, and how do you think his stay with the Thunder is going to play out? What is the best case and worst case scenario?

UConn Blog: Oklahoma City seems like a good fit for what he needs right now. Besides the whole young/winning culture that's been established down there, the team seems to have a need for his services but also enough depth in the front court to make him work for it.

Best-case scenario would be they somehow tap into his supposed untapped potential; worst-case is he moves on to the end of some other team's bench (because after all, he's still really tall). My guess is he'll end up somewhere in the middle, as a serviceable defensive center -- which is probably what the expectation should've been when he entered the league.

Many thanks to Justin for his time and answers, and be sure to check out the UConn Blog when you have a moment.