Share All sharing options for: Here's a Picture of Team USA Sleeping 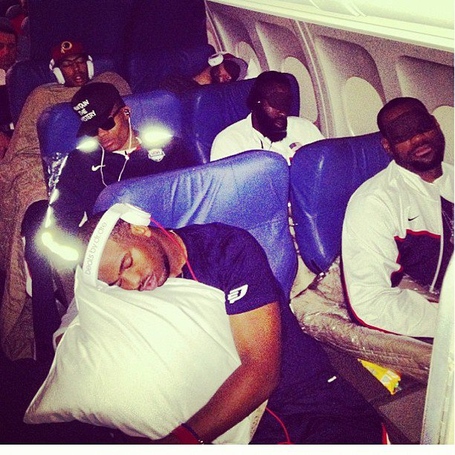 As a frequent traveler, I know that trans-continental plane rides can be brutal. Being 6'5" and riding in coach is no picnic, especially when you're in Asia and plane manufacturers don't anticipate anybody being taller than 6'0".

Regardless, it's still pretty hilarious to see dudes that are taller than me somewhat suffering in first class seats. You can also see how each individual player likes to sleep. Chris Paul and Deron Williams are pretty clearly fetal position sleepers, while LeBron James and Anthony Davis sleep on their backs. Harden and Westbrook, well, they fall somewhere in-between. But, regardless of all that, it's pretty clear that none of these guys were going to be caught in the traditional "fell asleep on each others shoulders" photo that so frequently happens on long plane rides.

Also, how in the hell are Chris Paul, Anthony Davis, and Deron Williams able to sleep with headphones on? I mean, the earbuds of Westbrook and Harden seem much more plausible, in my opinion. I've tried sleeping with those clamshell headphones on before, and it never works out well. If you wake up, you'll never be able to get back to sleep, and your ears will ache for like half an hour afterwards.

You can look at the other accessories used by players. Westbrook, Davis, and Williams all have hats, while James, Harden, and Williams are all using covers over their eyes.

In the end, I think the winner of this picture is that middle-aged guy in the very upper left corner. Because he proves that you don't need accessories to sleep. Unless he's just checking his phone or something.