Today, we continue Olympic Madness with a preview of Team USA!

The United States of America

Qualfied By: Gold at the 2010 FIBA World Championship

History: To only scratch the surface of Team USA's basketball history would take too long for this section, and I doubt I would mention anything that ESPN hasn't covered a thousand times over anyway. But in case you didn't know, Team USA has gone through a recent revival under the direction of Jerry Colangelo and Coach K. After stumbling to bad finishes in 2002 and 2004, the team enlisted the help of a bunch of younger NBA stars and committed to actually getting them training time together. They had a shocking loss to Greece in 2006, reducing them to a Bronze Medal in the World Championship that year. But they quickly returned to dominance, sweeping the 2008 Olympics and 2010 World Championship for easy golds.

Overview: What makes this version of Team USA different then teams of the past is obvious: size. Previous teams have experimented with playing a swingman at PF, but no team has ever really done it consistently, as their main strategy. The main area where the team would appear to be lacking is post scoring. Tyson Chandler isn't much of a scorer at all, even on the run n' gun Knicks, and Kevin Love relies on a lot of jumpers to get his high scoring numbers in the NBA. Team USA has gone through some dry spells in their exhibitions, but by and large they're still the highest scoring team in the world, so this isn't too much of a concern.

One might also be concerned about rebounding, but those concerns quickly wash away when you consider that the two bigs Team USA does have, Chandler and Love, are two of the league's top rebounders. Some of the bigger swingmen, like James and Durant, are great at grabbing boards as well, especially on the defensive end.

However, a very real concern is how their defense is structured. Since the team has a lack of size and a plethora of athleticism, their objectives on defense are twofold: Keep the paint closed, and pressure for steals in the backcourt. This keeps the team from being burned by the post scorers that you would expect them to be burned by, and it also keeps the other team frustrated while earning what are essentially bonus points for Team USA. The strategy does open up a few more holes though. First of all, since the team concentrates on keeping the paint closed, it usually keeps the designated center (Chandler or Love) chained to the paint. If the opposing center can shoot, they're usually able to get open pretty easily. Secondly, their concentration on pressuring the paint sometimes leads them to bunching up at the top of or on one side of the lane, leaving the player on the unoccupied side of the paint open for an easy layup. Thirdly, since the team is mostly worried about points inside, they won't play high enough on the three point line to guard it well, giving the other team a few open shots. Lastly, since they pressure a lot, they're prone to commit stupid fouls against the defense.

Below: International Game Differences, Are Weaknesses Really Weaknesses?, Why Team USA is Ballin', Highlight Reels, Notable Players, Outside Quotes, Outlook For the Olympics and Beyond!

Since the team has played their entire professional careers in the NBA, they also have a little bit of trouble adjusting to the rules of the international game. FIBA turned the traditional trapezoidal lane into an NBA rectangle in 2010, but there's still some differences. The game is only 40 minutes long, and players are only allowed 5 fouls. The ball is slightly larger, leading to some bricked dunks by the NBA players. Refs are stricter on traveling calls, usually taking more care to check whether your pivot foot is on the ground when you gather the ball. But, some differences work to Team USA's advantage. The three point line is shorter, making it a lot easier for sharpshooters to score. And there's no such thing as goaltending when the ball has already hit the rim, making putback dunks a lot easier for the more athletic NBA players.

You might think that all of these "weaknesses" in Team USA is really just me picking at things that aren't there. And in a sense, I am. This team hasn't been beaten in 6 years, and their talent is still unmatched. In Vegas, you have to lay down 8 bucks to win just one dollar if Team USA wins gold. But, as I've said before, there are ways for this team to lose, no matter how invincible they may seem. 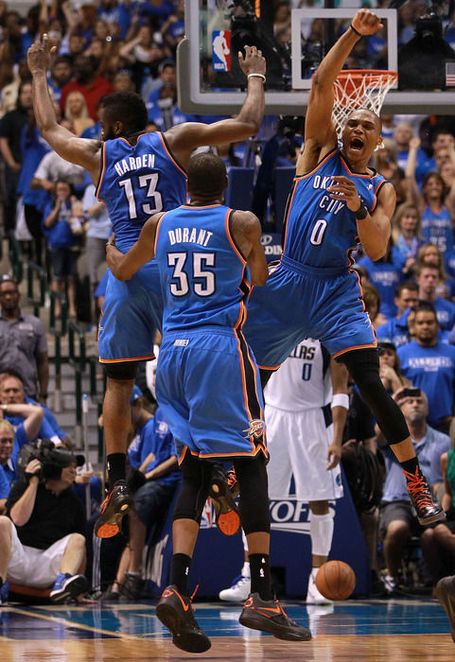 This IS still a Thunder blog, right?

It's hard to find artistically done highlight reels for other international teams, but with Team USA, it's pretty easy. The above video is a masterpiece. Seeing Team USA do work in slow motion accentuates the majesty with which they play the game of basketball, especially when combined with operatic music. When I finished watching the video, I wasn't sure whether I just watched 2001: A Space Odyssey or basketball highlights. But I was satisfied nonetheless.

Other Highlights: 2012 Exhibitions: Win vs. Dominican Republic, Win vs. Brazil, Win vs. Great Britain, Win vs. Argentina, Win vs. Spain

Players to Keep An Eye On: Let's face it, you already know these guys. In lieu of spitting back well-known information, I'll link you to a picture of Russell Westbrook in some ridiculous glasses.

"But the U.S. remains the overwhelming favorite in the 12-team field to win a third consecutive international championship, following the 2008 Beijing Olympics and the 2010 FIBA World Championship in Turkey. Rival contenders have suffered injuries of their own -- Spain won't have point guard Ricky Rubio and France will be without center Joakim Noah -- and no country can match the U.S. for depth or athleticism.

The Americans may lack traditional size in the pivot -- NBA Defensive Player of the Year Tyson Chandler is the only true center on the 12-man roster, with Kevin Love and No. 1 pick Anthony Davis behind him -- but they are nonetheless likely to control their air space. No other country possesses as many vertically aggressive stars as the U.S., which has James, Durant, point guard Russell Westbrook and others. The pick-and-roll that Greece ran possession after possession during its semifinal upset of the U.S. in the 2006 Worlds has been offset by Team USA's lineups of versatile defenders who can switch without fear. Consider this potential combination: James at center, Anthony at power forward, Durant at small forward, Kobe Bryant at shooting guard and Chris Paul, Deron Williams or Westbrook at the point -- altogether they should create endless pressure at both ends of the floor. The U.S. also has a top NBA wing defender, Andre Iguodala, coming off the bench."

"The USA team will most likely feature an unmatched defensive intensity - probably over the entire length of the court - while on offense Krzyzewski will try to get his points before the opposing teams can set their defenses. And when that does happen, the Americans will probably be a slashing team constantly attacking the rim and passing out to open shooters.

As very often with American teams, Krzyzewski must find a couple of shooters who can wait out on the wings for the driving player to dish out to them and hit those open shots.

Another issue could be health. With the abbreviated but more compact NBA schedule, some of the NBA's best could be dealing with injury knocks or tired legs - with back-to-back-to-back nights on the schedule as well as stretches of four games in five nights.

Again, also with that, Team USA is the overwhelming favorite to capture the gold medal - thanks to Krzyzewski's embarrassment of riches."

Does This Team Have a Shot at a Medal?

As I've said before, they're the odds on favourites to win the gold, and anything less than a gold would be disappointment for the team. The only thing that could stop them would be an upset, because the rest of the world still isn't at the point Team USA is. As far as teams go, the teams that have the biggest chance to upset Team USA would be Spain, Argentina, and Russia. Spain has a solid trio of big men in Gasol, Gasol, and Ibaka, and they do a good job of stretching the USA defense. Argentina is a old and experienced team centering on two borderline All-Stars in Ginobili and Scola. They could get Team USA into foul trouble, and burn them from three. Lastly, Russia is a very defensively focused team, and has the tools to keep Team USA out of the lane. France and Brazil probably have the talent to take Team USA down, but both of them have turnover problems, which makes a win against Team USA impossible. But, again, an upset would be a mighty feat against this team.

Everyone likes to talk about how David $tern wants to make Olympic teams have only three players over the games of 23 (much like Olympic soccer). But the decision still hasn't been finalized by FIFA, so I'm not holding my breath until they make an announcement. Anyway, Team USA still has a ridiculous amount of players to choose for their team, and they will always remain the world's deepest team. But as time rolls on, the game is getting introduced to more places around the world, and bigger and better challengers will arise. It's only a matter of time before China trots out a lineup consisting of 5 seven footers that can dunk from half-court. Right?

How do you think Team USA will finish? Will they win gold this year? Vote in the poll, post a comment!

Photo of Harden, Westbrook, and Durant by Ronald Martinez/Getty Images.