Today, we continue Olympic Madness with a preview of Argentina!

Qualfied By: 1st at the 2011 FIBA Americas Championship

History: Until recently, Argentina hasn't been much more than a blip on the international basketball map. Aside from a short run of success from 1950-1952, the team never achieved higher than 6th in a non-South American tournament until 2002. But in that year, everything changed for Argentina. They witnessed the birth of what they call the "golden generation" of players, including five that were destined to play in the NBA. During the 02 World Championship, Argentina managed to be the first team to defeat the professional version of Team USA. They wound up in second place and have had international success ever since, never placing below 5th in a tournament. Their highest achievement was a gold medal in the 2004 Olympics.

Overview: However, age is starting to catch up with the team. They only have one starter under 30, and only two players on the roster under the age of 28. Lately, they've been prone to sluggish starts, such as in the close loss to Team USA and their blowout loss to Spain. These games were exhibitions, so it's easy to not read too much into them, but Argentina managed to make comebacks later in the game despite their sluggish start, signaling that something is potentially wrong.

Despite the age, Argentina has a lot of talent, and they play some very organized basketball. The same team has essentially been playing together since 2001, and they know each other well. Strategy-wise, they fall somewhere between the creativity of the Brazilians and the rigid play of the Lithuanians. They're not exactly European, as you'll occasionally see a really slick pass or watch players do work with their back to the basket. But they're not exactly of the South American style, either. They use Ginobili in a lot of isolation sets, and they love to get to the line.

As a result of this vague combination of styles, they're not really weak against any particular type of team. The only real issue they have strategically is that they love to score lots of points, but have trouble committing in the paint on the defensive end. This means that they can get blown out by a good offensive team (such as they did in 2010 against Lithuania) and struggle against teams that they shouldn't, as evidenced by their close wins against Jordan and Australia in 2010.

Below: Why They Don't Commit in the Paint, The Argentine Offense, Why Argentina is Ballin', Highlight Reels, Notable Players, Outside Quotes, Outlook For the Olympics and Beyond!

Their paint commitment doesn't necessarily put them at a disadvantage against teams with good post scoring big men, because Argentina still has the size to hold their own down low. Rather, they stick to man-to-man no matter what happens, so opposing guards will find it easy to get into the paint uncontested. This allows a team with good ball movement, like Lithuania, to exploit them for easy points consistently. A team that relies on individual talent, say Nigeria, might struggle a bit more against Argentina.

Offensively, the team is bomb, and they center around two proven NBA scorers in Luis Scola and Manu Ginobili. Both of them provide legitimate threats inside, and have crafty ways of getting around their defenders. Outside the arc, the team uses a trio of Carlos Delfino, Andres Nocioni, and Pablo Prigioni to shoot the majority of the team's threes. While Scola and Ginobilis draw the pressure, they get a good amount of open shots. Outside of those five, point production drops sharply, but Hernan Jasen functions as a good glue guy, rebounding and passing well, while Juan Gutierrez and Federico Kammerichs do some good rebounding and post intimidation. 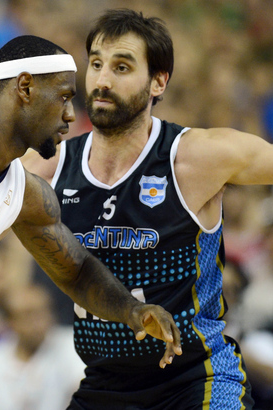 Two Words: Federico Kammerichs. First off, and most importantly, this guy used to sport a full-on 'stache. I don't even know how to classify that thing. It's just so thick, full, and classy. You couldn't possibly grow a better moustache without being outlandish. Secondly, look at the dude's Olympic profile. The facial expression he has in his picture makes it look like he just witnessed his wife cheating on him. Yet, despite this outlandish expression, you can't help but notice how perfect his beard looks. It's not fully grown in, but it doesn't even come close to looking half-assed. Also, his profile says that he plays bass in a band, which only ups his profile of coolness. Last, but not least, take a good hard look at the picture above. Despite being given the Herculean task of guarding LeBron James and being in the midst of running, he managed to have the most irreverent look on his face for this picture. Nothing makes him break a sweat. I'm serious. Look him up on Google Images. You won't find one picture of him losing his cool.

He plays pretty good basketball too.

Though this highlight reel is just of one man, I think it symbolizes why this Argentine team has been so successful. Luis Scola's moves aren't just amazing scoring plays. You can see him dish out some pretty amazing assists, fight for rebounds, and know how to get to the line. The quality and music are pretty horrible (especially for something that happened in 2011), but it's worth suffering through to see these sweet plays.

Players to Keep an Eye On (click on their name for highlights): Luis Scola, a mean post scorer with an excellent touch around the basket. No matter what position he's in, he always seems to find a way to throw the ball in the hoop, or create an opportunity for someone else. Manu Ginobili, a great scorer who can have stretches of fantastic offense. He's great at carrying an offense while it's down, and can get to the line like no other. Carlos Delfino, a decent enough scorer who can both drive the paint and shoot the three. Pablo Prigioni, the Director of the team. He can find his teammates with that slick South American style, and he can make some tough-looking threes. Andres Nocioni, a former NBA forward who can do some decent shooting and rebounding. Hernan Jasen, a great passing forward who helps keep the offense moving. He can also run the break. Juan Gutierrez, a standard center who does all of his work down low. Federico Kammerichs, an exceptional rebounder for his size.

"It was clear coming into 2011 that with only two players in their 20s and an average age of 32, this team’s playing days are numbered. The FIBA Americas Championship – held at home for the first time since they had last won it in 2001 – was always going to be the chance for Argentinian fans to say goodbye this team. Were they to manage finish in the top two, or better still match the high level of expectation and win the tournament, they would be given one last chance at glory at the London 2012 Olympics.

That an injured 36-year-old like Oberto was picked for the FIBA Americas Championship roster is indicative of Argentina’s weaknesses but also says a lot about their strengths. They are ageing rapidly and with as many as eight games in 16 days energy and fitness levels could become a major concern deeper into the tournament.

Most in Argentina admit that the country has few ready to fill the shoes of this exceptional crop of players and agree that now is not the time for a changing of the guard; they are more than willing to put tomorrow’s concerns aside to give this once in a lifetime generation one last chance of glory."

"As such, this could be Argentina's last Olympic tournament for a while. Ginobili turns 35 this week. Prigioni is 35. Luis Scola is 32. They need to seize the moment and add to Argentina's medal count. Of course, failing to do so wouldn't have been marked a failure for the greatest collection of Argentine basketballers ever -- no performance in London can erase Athens or Beijing. Barring a stunning gold in London, the Golden Generation will be remembered for that 2004 triumph above all else."

Does This Team Have a Shot at a Medal?

They certainly have the talent to beat any team in the tournament. And by any team, I mean yes, they could beat Spain and the United States. They might have problems with high scoring teams like Lithuania and France, but as long as their offense doesn't severely falter, they'll always have a chance to win. However, on the flip side of the coin, they'll always have a chance to lose. I could see this team surprisingly choking and not advancing beyond the group stage, and I could also see this team taking it all the way and grabbing gold. It really depends on how well their bodies hold up, and whether they can come out on every single night with the energy that younger teams do. Then again, the Spurs manage to win every single friggin' year, so I don't even see why I'm questioning their endurance.

Everyone pretty much likes to predict doom and gloom for this team, especially because they're not letting younger guys onto the roster. And while there's no doubt that they won't be the team they once were, consistently contending for gold, I don't think these guys will fall off the map and start losing games to Venezuela and the Dominican Republic. It's doubtful the Golden Generation will retire all at once, and the team does test their younger players. They played a roster with only two guys over 30 for the 2012 South American championship this June, and they managed first place. While nobody really knows if this talent will translate to their real team, Argentina is still a country that loves basketball, and I think they'll be a factor going forward.

How do you think Argentina will finish? Do they have a shot at beating Team USA? Vote in the poll, post a comment!

Federico Kammerichs photo by Jerry Lai of US PRESSWIRE.