Share All sharing options for: NBA Board Of Governors Approve Advertising on Uniforms in 2013-2014 Season

"Towards thee I roll, thou all-destroying but unconquering whale; to the last I grapple with thee; from hell’s heart I stab at thee; for hate’s sake I spit my last breath at thee." -Herman Melville

The NBA Board of Governors held their annual summer meeting and David Stern met with members of the media on Thursday to discuss the proceedings. There had been rumors of the league allowing sponsors to advertise on team uniforms, but it didn't seem that anyone really took the idea seriously. It works fairly well in Barclays Premier League, but not in the NBA. That would be like waking up to find a flock of geese in your living room. They're playing parcheesi and one of them is wearing your pants. Weird. Unsettling. But now, it's reality. That goose with your pants is now Kevin Durant, and he's sporting a McDonald's logo on his jersey. Or could it be Doritos? Maybe a nice Apple logo. It doesn't matter, it's absurd. Another revenue source is nice, but this is a bridge too far. For the brave, there's a realistic look at what's to come after the jump... 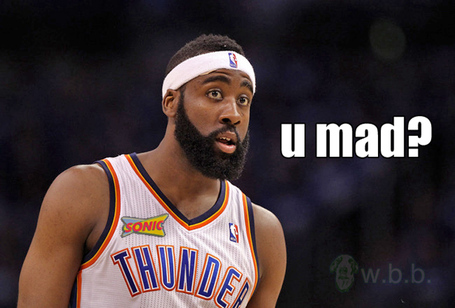 One could hope that there's still a chance to avoid this future, but when revenue is involved all thoughts concerning tradition and sanctity are gone.