Share All sharing options for: Perry Jones III: Steal or Bust? (Q&A With Prashanth Francis of Our Daily Bears) 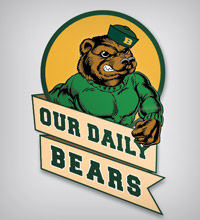 There has been much discussion as to whether Perry Jones III will be a viable player for the Thunder in the future. Most Thunder fans seem to think he's a huge steal (as indicated by poll numbers in a previous post), including myself. Many analysts are giving the Thunder a high grade for snagging him near the end of the first round. But, as we all know, there's no better way to really get to know who a player is then to ask somebody who's avidly watched him for two seasons.

As such, I turned to Prashanth Francis of Our Daily Bears, SBNation's Baylor Bears blog. He obliged my request for a Q&A, and did it in a big way. Look below for the lowdown on everything you need to know about Perry Jones III.

1. Much has been made of Perry Jones III's knee problems. He was looking like a lottery pick until some team doctors made a bunch of hullabaloo. Can you provide any insights into his injury history at Baylor, or whether this knee injury should be a concern at all?

My initial reaction to hearing that Perry Jones III was sliding because of medical reasons was that this was probably pre-draft smokescreen. There are a few reasons for this. First, we heard nothing of an injury at any point during the season. Perry took some bad knocks that made us all hold our breath throughout the season (the game in November against BYU and the collision with Anthony Davis in the Elite 8 game come to mind). However, he always came back into the game and never seemed to show any real ill effect. Furthermore, by all accounts, Perry had a very nice NBA Combine where he showed enough athleticism that the idea of playing him at the 3 really gained steam (and then promptly fizzled...more on that later). It's hard for me to believe that there is a pressing injury concern to be worried about here. Since the rumors that came out involved the meniscus, it seems likely to me that if there is any injury, it's more along the lines of a chronic problem that won't be a real, career-threatening issue for some time. I could very easily be wrong though as I don't have access to any of the data. Just know that we didn't hear anything about a knee concern at Baylor - and given the many and varied ways they defended Perry's failure to meet expectations, it's surprising to me that they wouldn't use this if they could.

2. Baylor had an impressive run to the Elite Eight this year. How much of part did Perry Jones III play in that run, and what was his role?

Perry Jones III was the most important player on the 2011-12 Baylor Bears. However, that statement means a lot less than you would expect for a player with the talent of a lottery player coming from a school with the relatively sparse basketball history of Baylor. As shown by the draft, where fellow Bears Quincy Acy and Quincy Miller both went early in the second round, Baylor had quite a nice team last year. Offensively, PG Pierre Jackson and SG Brady Heslip were more than capable of carrying the team for stretches offensively with their ability to attack the rim and shoot three's, respectively. The Bears were a team that had a lot of depth and won many games from the sheer probability of at least 2-3 of those talented offensive players having a good game on any given night. Still, there is no doubt that the Bears were at their best when Perry was at his aggressive best. Frustratingly, this didn't happen often enough in the minds of many Baylor fans. Perry was most often played at the 4 with Quincy Acy playing the defensive stopper role at the 5. Baylor tried to get Perry to set up on the low block and use his quick first step and general athleticism around the basket to take advantage of the general dearth of quality defensive bigs in college basketball. Working off that, Perry could expand his game away from the basket with his array of spot up jumpers and ability to beat bigger defenders off the dribble. The biggest weakness in Perry's game is that he would too often become passive and settle for jumpshots instead of being more aggressive to force higher percentage shots and/or get foul calls.

Below: His Best Moment as a Bear, His Strengths and Weaknesses, an NBA Comparison, and His Difficult Youth!

3. What's your best memory of Perry Jones III as a Bear?

I think my best memory was early in the season when Baylor went to BYU and Perry had a fantastic game that was needed for Baylor to escape with a win. Coming off a disappointing season that ended with him suspended, this was the first time I was able to watch the 2011-12 Baylor team with all of it's important parts clicking together. Perry scored 28 points on 11 of 16 shooting, 2 for 2 from 3, to go with 8 rebounds, 3 assists, and some solid defense. After that game, the buzz really jumped a notch and it seemed that this Baylor team, and Perry specifically, was destined for great things.

Here is the Baylor Athletics video clip from that game:

4. What would you say is his biggest strength?

In my opinion, Perry's greatest strength is his versatility. He combines height, length, and athleticism along with actual basketball skills to have a nice repertoire of moves to generate offense, solid rebounding ability and decent defense to be a player with few overt weaknesses and many different ways to help a team. I'm not sure which of his skills will play well at the professional level, especially for a stacked team like the Thunder, but it would be shocking to me if he couldn't help in some fashion or another.

5. What would you say is his biggest weakness?

Perry's biggest weakness is a factor of his passive personality type and his versatility - he never developed into the elite player that could consistently carry a team from game to game the way players like Thomas Robinson or Jared Sullinger did. Part of that has to do with how deep Baylor was - Baylor needed efficient performances, not inefficient box score filling performances. Still, an aggressive Perry Jones III was clearly the number one concern for other teams and it opened up the floor for other players when he showed up. Fortunately, I think Oklahoma City is the perfect place for Perry to end up. I actually wanted to see him fall a bit to a good team instead of going to a weaker team that would rely on him to carry a team too quickly. It works out very well for him to be in a situation where he can be allowed to help a team through his array of offensive abilities yet not be relied on to do so night after night.

6. If you had to compare him to a current NBA player, who would it be and why?

We've struggled with this at OurDailyBears. The best suggestion that I've seen is Lamar Odom with a bit less defensive ability and a bit more range/versatility on offense.

7. Based on what you know, do you think Perry Jones III will be a good fit for the Thunder?

Yes. There's a chance that being developed slowly will allow Perry to turn into a superstar. Even if that doesn't work out, I still think that Perry will be able to contribute off the bench right away and should be able to be a starter in a few years.

8. Are there any Thunder fans down in Waco, or is it Mavericks country? Do you think Perry Jones III will make any converts down there?

Baylor seems pretty evenly split between the three Texas teams, though the volume at which you see/hear these fans varies depending on who is good at the time. I don't know many Thunder fans, though I don't know many who particularly hate the Thunder either. From my impression, most Texas fans would rather see the Thunder succeed than the Lakers or (especially) the Heat.

9. Is there any other information you'd like to include?

As a Mavericks fan who finally got closure for the 2006 Robbery, it's a lot easier for me to see other teams do well without feeling bitterness. I was cheering for you guys against the Heat even after the thumping you guys laid down on my team. While Perry the player was frustrating, Perry the person has always been a great ambassador for Baylor and somebody who seems very likeable on a personal level. That he is able to be such a humble person who isn't solely focused on money or personal gain is remarkable to me. If you have the time, I'd strongly encourage you to read this piece about the very difficult circumstances that Perry grew up in.

Be sure to check out Prashanth Francis at Our Daily Bears for all of your Baylor Bears news! Let us know what you think of the signing in the comments!