Today is the start of OLYMPIC MADNESS! Basically, that means we'll be giving in depth previews of every single Olympic basketball team, sometimes busting out two a day. We'll also be shooting out group previews that will give you the lowdown of how these teams will do against each other. Basically, we've got the best Olympic coverage on the internet, so keeping your internet televisions tuned to WTLC would be in your best interest.

History: Tunisia generally hasn't been a very powerful team, usually finishing in the upper echelon of FIBA Africa tournaments. Until 2009, they had not medaled in the tournament since 1974. As such, they had not participated in a non-African tournament until 2010, when they qualified for the FIBA World Championship. They finished winless, with their closest loss coming by 13 points to Iran.

Overview: Tunisia is, admittedly, the weakest team in the tournament. Though they are the champions of FIBA Africa and got in over the recently qualified Nigeria, Nigeria has a completely different roster then the one they had back then, and Tunisia has little talent that plays overseas.

But, they do run an interesting game. They very rarely foul, being the team in the 2010 World Championship preliminary round to foul the second least. They also get a good number of blocks, equal to that of most other teams in 2010. They also do an excellent job of distributing the ball, and don't really have a main scorer. Despite winning the Afrobasket, their highest scorer was Macram Ben Romdhane with a mere 12.7 PPG, 13th among all players.

When you look at Tunisia on the floor, you notice that the team is seemingly devoid of traditional roles. Big guys won't hang around the basket on offense, and it's not uncommon to see a guy that's 6'9" dribble it up the floor like a point guard. Everybody is trusted to shoot the ball, and nearly everybody is trusted to dribble. The ball will often pass through every player's hand before it is scored, but you'll rarely, if ever, see a guy rack up assists. They're not a run and gun team, and they're not a team that use shooting big men in certain situations. In fact, they're not like any team I've seen before. When you come right down to it, the team's offense is basically basketball Communism in its' truest form. And that's not a knock on anybody, as they won the Afrobasket doing it.

Since everybody on the roster has a license to shoot, they often end up hanging around the perimeter and jacking up a lot of gamey shots. This can lead to some periods of really stagnated offense, and a really bad percentage from beyond the arc. Defensively, they always use man to man. This leaves them vulnerable in the paint, as they don't collapse on a single player very well. They also lose a lot of size down low when Salah Mejri leaves the game, furthering their problem.

They tend to rely on their rebounding as a main strength of the team, but that's only because they're bigger than most African and Arab teams, and can rely on hustle from their guards. If they were to go against a traditional lineup, like Russia, they probably wouldn't be able to rely on the chaos that rebounds cause as much. They also don't excel in a faster paced game, because they're not very good at finding open shots quickly or handling the ball in the open court.

Below: Why Tunisia is Ballin', Highlight Reels, Notable Players, Outside Quotes, Outlook For the Olympics and Beyond! 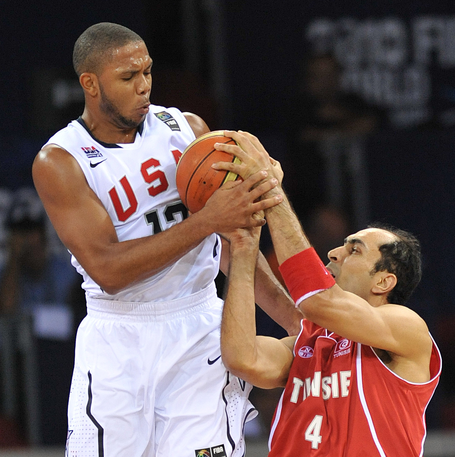 Radhouane Slimane is one of the only players with the balls to admit that he's balding. The dude looks like he's about to bust out some really thick geography book, or go fishing, or....do something else that teachers and Dads do. Many props to him for not bowing down to the shame and rocking what little hair he has left. World B. Free, eat your heart out.

In fact, Trey Kirby, back when he wrote for Ball Don't Lie, had this to say about him:

That's right. This guy is "probably" Tunisia's best player, but sometimes he plays too rough for his own good. In fact, he's such a bad mammajamma that he left the Tunisian national team, only to apologize to the team's president years later because he wanted to get back on court and bust some skulls. That's dedication. He's the Tunisian Paul Millsap, basically, only with a severe case of male pattern baldness.

Though this is a video of the team getting destroyed by Team USA, it includes a good deal of Tunisia highlights and gives a good example of what they're capable of doing on a big stage. Included is a sick fading to the side three from Marouan Kechrid, and a ton of threes in general. Also watch for a crazy fading out of bounds pass that somehow finds its way into the hands of Macram Ben Romdhane.

Players to Keep an Eye On (click on their name for highlights): Sofian M'Rad, a recent call-up from the under 19 team. He's the only member of the team to play outside of the Arab world, getting spot minutes for ALBA Berlin, and this will be his first time with the senior national team. He likes to work for tough rebounds in the post, and he loves to run around his opponent on the perimeter, fighting tooth and nail to get to the basket. Macram Ben Romdhane, generally the team's best scorer. He's most effective while running the fast break, and he's a workhorse in the paint. The one-handed dunk is a specialty of his. Marouan Kechrid, a point guard with a very quick first step. He has the ability to get past his defender or clear space for a shot quite well, and he's often very crafty about faking out his defenders. Amine Rzig, a player notorious for scoring when it matters. He has the ability to hit a jump shot with other players in his face, not needing to pause and create space. Salah Mejri, the team's defensive and rebounding force in the paint. He played for the Utah Jazz in the Orlando Summer League.

"The question is whether Tunisia's new reign atop Africa is a blip in Angola's history, or a new norm. The team's performance in London could give us a clue. In its five Olympic appearances, Angola has never finished better than No. 10 in the 12-team tournament. Tunisia will be looking to improve on that record, albeit out of the impossible Group A, where games against Argentina, France and Team USA loom."

Does This Team Have a Shot at a Medal? At this point, they really don't. Their talent level is just too far below that of the teams in this competition. Still, I do think that they'll be good enough to at least give one team a run for their money. It's something that's hard to quantify, but the team is essentially a collection of role players. They don't have a go to guy who can score it on every possession, and because of their loose structure, guys will overcompensate and fail miserably. They also rely too much on things like rebounds and defensive disorganization, which they won't get at this level of international play. Plus, they were recently destroyed by Spain.

Future Outlook: If I were a Tunisia basketball fan, I'd be really excited about the future of the country. In 4 or 5 years, they'll probably be the dominant team in African basketball. First of all, they have a stable coaching staff and player roster, allowing the team to develop together. Secondly, they have some really exciting prospects in M'Rad and Mejiri, both of whom will probably be an echelon above their current peers. Lastly, they have their own unique national style that could allow them to get an upset win if their cards are right.

How do you think Tunisia will finish? Do they have a shot at beating Team USA? Vote in the poll, post a comment!