The USA men's team is back in action tonight at 7PM CST to play against the Brazilian national team. It will be interesting to see how the team continues to gel and work together and whether Coach K opts to continue to have the 3 Thunder stars come off the bench. 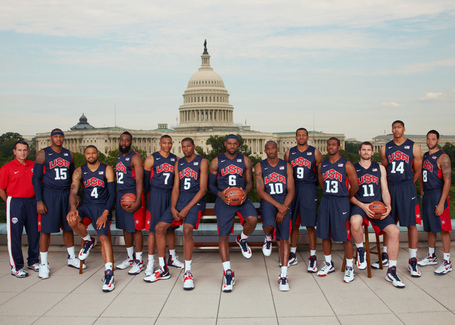 Stay on top of all player movement and rumors by checking out SB Nation's stream throughout the day.

Reggie Jackson got better as the week went on. He was the best player on the court and he played like it.

Early word on high draftees is promising. Michael Kidd-Gilchrist looks to be everything the moribund Bobcats need, and Dion Waters looks like he might be a Russell Westbrook imitator (for better and worse).

The Vegas League kicked off at the same time the Orlando League ended, and Gault gives us the lowdown.

The Eye Test | Wages of Wins

The first principle is that you must not fool yourself, and you are the easiest person to fool. - Richard Feynman

Pacers GM Pritchard gives the lowdown on how the team has worked to keep itself together this off-season.

The men's team received a very high honor in being granted a tour of Arlington Cemetery and Kevin Durant, LeBron James, and Kobe Bryant were privileged to place a wreath on the Tomb of the Unknown Soldiers. If you are unfamiliar with this place, follow the jump for an impassioned account.