Scott Brooks is one of the more understated head coaches in the NBA. He isn't surly, he doesn't give Greg Poppovich-like quotes, and he doesn't play the media as guys like Phil Jackson and Mike D'Antoni do. Usually he just says in self-deprecation that he wishes his team's success was a byproduct of some great speech he gives. Which makes him, to me, a pretty good coach for his young team. Here is what he had to say after Game 6.


After the jump - photo evidence that Brooks suddenly remembered that he didn't pick up the week's dry cleaning like his wife asked him to. 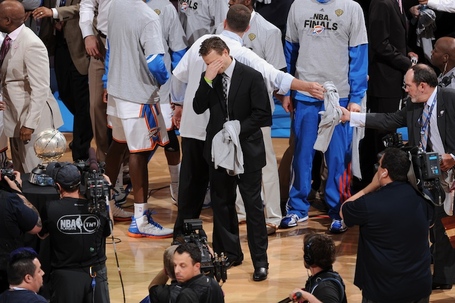