Share All sharing options for: NBA Finals Interview with The Sonics Fan Behind the Thunder Bench and Sonicsgate Director Jason Reid, Part 3 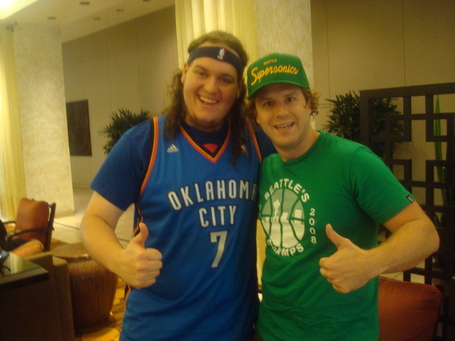 As implied by the picture above, with this section of the interview, I was trying to look at how Thunder and Sonic fans could have a better relationship. I was also trying to get an idea of what closure would be for the Sonicsgate cause, and what Thunder fans can do to help reach that closure. What I wasn't expecting was a great story about Kevin Durant's last day in Seattle. Without further ado, here's the last part of WTLC's interview with Jason Reid!

Welcome to Loud City: When I listen to local radio and look at comments and blogs and things, there are a lot of Thunder fans who absolutely hate you guys for trolling the team and sitting behind the bench and cheering against them and think you live in the past, et cetera et cetera. What do you have to say to them?

Jason Reid: It's just really hard for us to hear things, not only from Oklahoma City fans, but from around the country when they say, "Give it up, you didn't support your team, if you would've supported your team, they'd still be in Seattle." The Seattle fans and the Sonic fans supported the team for 41 years. It's like a gut punch every time we hear a comment like that. Because we know for a fact we supported our team. Yes, our government let us down. But it has nothing to do with the fans. The same way we don't blame the fans of Oklahoma City for rooting for their team and supporting this franchise. Of course it's a great thing for your city, and of course you should be supporting them, no matter how they came to be, and how they came to your community. The same way we'll support whatever NBA team is going to re-locate to Seattle.

It's just really hard. You know, that's why we made the film Sonicsgate. And we can only hope that Thunder fans take the time to watch the film, because we made that so they can understand our plight as sports fans. If they could only step into our shoes and feel the pain we feel from losing this team, I think they would probably understand a little better where we're coming from and why we're doing what we're doing.

It would be as if they decided, hey, we're going to take the Oklahoma Sooners, and we're going to move them to Seattle, and they're going to play in Husky Stadium. And, in addition to that, we're going to attribute all those national championships to the city of Seattle. The media's gonna report it that way. And that's essentially what happened. You guys have a rich football history, and imagine if they ripped that away from you, and you didn't have that anymore. And in addition to that, you didn't even have football at all in your state anymore. Imagine how that would feel. And I only ask the people who don't understand how we feel to think about it that way and think about how that would feel.

Below: The Best Option for getting the NBA back in Seattle, The Last Day of the SuperSonics, A Better Relationship Between Sonics and Thunder Fans!

WTLC: Speaking of relocating another team, what is the most viable option for getting the NBA back in Seattle?

JR: At this point, expansion is not an option. Really the only way we're going to get a team is to get a team from another city. So obviously, the Sacramento Kings situation is very tenuous with the Maloofs basically backing out of a deal they agreed to with the NBA and the city of Sacramento. We really don't want to take the Kings in Seattle. We love West Coast basketball, we've had great rivalries with the Kings through the years, we remember those teams in the 2000s with Webber and Divac and Bibby and all those guys. So we want the Kings to stay in Sacramento. If they are going to leave the city no matter what, then certainly, we'll welcome them with open arms in Seattle. We believe that a team like the Memphis Grizzlies makes more sense. This is a team that was an expansion franchise not too long ago. They started in Vancouver in the Pacific Northwest where we used to have three franchises, and now all that's left is the Trail Blazers. And Memphis has supported the team, you see the playoff games from the last few years. And I would feel terrible for the fans there. But they didn't have 41 years of history and a championship and going to the finals and all the things that Seattle has. Ultimately, they'd started in the Pacific Northwest, so moving them back would make a lot of sense.

WTLC: If Seattle got a expansion franchise today, would there be any former Sonic or current Thunder player that you'd want on the team?

JR: Well, I mean, of course we would love Kevin Durant on our team. What's actually funny about the game is, we did not plan it this way, but Kevin's mom and brother were in the seats directly behind us. In row 2 at the game. We talked to them. Kevin's Mom is a really wonderful woman. We remember her from Seattle. You know the last Seattle Supersonics game was a road game at Golden State. And myself and Colin Baxter, who was at the game with me, went out to the airport at 1 AM and greeted the team the last time they ever came back to Seattle. Kevin's Mom was there. And we were like, "We hope you stay! We hope you stay!" Because at that point, Clay Bennett has made his intentions clear. And his Mom looked right at us and said, "See you guys next year!"

And I reminded her of that, not in a negative way, just, I had to remind her. And she's like, "I'm so sorry about that." But you know, at the same time she understands where we're coming from as sports fans. We told her that we have nothing against your son, Kevin. We think he's one of the greatest basketball players of all time, or will be, when all is said and done. We did mention to his brother, who I believe is now his agent, that when his contract comes up and if we have a team in Seattle, we would love it if we wants to finish his career with us. (Laughs.)

But anyway, yeah. I mean I obviously love Kevin Durant and Russell Westbrook. Like I said, we're huge NBA fans. So I love a lot of guys in the league. Like Monta Ellis is a super exciting guy. I would love to watch him play for 82 games a year. I like Dirk, maybe it's just because of our similar doppelganger appearance with my long hair. But uh, Durant is one of the best players in the league and I can't wait to watch Team USA this Summer. I might even buy Durant a Team USA jersey. I can support him if he's playing for America, just not Clay Bennett. (Laughs.)

WTLC: Alright, so here's my last question. What do you think we can do to foster a better relationship between Sonics and Thunder fans?

JR: Yeah, I mean, we are really big on trying to bring our two fan bases together. What we want to foster is a rivalry without the negative personal attacks that come from both sides. It's a common thing where somebody from Oklahoma attacks Seattle and then someone from Seattle attacks Oklahoma and it's low blows. And that's not representative of Sonicsgate and most fans, I believe, on both sides of the coin. I think that what we do want to foster is a rivalry when we get a team back. Because I really do believe that the Oklahoma City Thunder vs. the Seattle Supersonics rivalry will go down as one of the greatest sports rivalries in history once we get a team back. So, we want to root against you guys, but we want to do it as sports fans do it, not with personal attacks or slights against each other.

The other thing is, we really want Oklahoma fans and Seattle fans to work together to fix the shared history situation. When Clay Bennett bought the team, he purchased not only the team and the banners and the trophy, but he also agreed to a shared history where Oklahoma can stake claim to the 1979 championship trophy. To all of the records. As you know, the media guide in Oklahoma City has all of the Seattle Supersonics records in it. And I think that this is something that Oklahoma City fans don't want. This is definitely something that Seattle fans don't want. The franchise came to Oklahoma in 2008. That's when it should start. Those records and everything, the trophy, should be left in Seattle. You guys don't want our retired jerseys, you guys don't want our banners, you guys don't want our trophy. We don't want the media to report on it this way anymore. But, unfortunately, when Clay Bennett purchased the team, he overpaid for it by almost 100 million dollars. And part of the reason he paid for that is because of the history. The history has financial value. If Clay gets to read this article, I would only say that I hope you can work with Chris Hansen, our future owner of the Seattle Supersonics, to get a deal done to remedy this situation. We would appreciate that greatly as sports fans. It would be a break, you know. If they weren't attributing the history in the media, then I don't know that we'd be showing up to games. The fact that it's almost like they're trying to brush it under the rug, what happened in Seattle, is really disappointing.

Bottom line is, we want Oklahoma City Thunder fans to let your ownership know, "Hey, we don't want this history!" When Seattle gets a team back, give them the history back so we have created our own history in Oklahoma City. You guys have created something that's amazing in just four years. We respect the city of Oklahoma [sic], the fans of the Thunder, and Seattle. We can still root against you, that's what sports fans do, it's not a personal thing at all. I think if people understand that and realize that and put themselves in our shoes then I think we can foster a better relationship.

You can find more of Jason and his cause @Sonicsgate on Twitter or at Sonicsgate.com! Be sure to check out Parts 1 and 2 if you missed them!