Share All sharing options for: NBA Finals Interview with The Sonics Fan Behind the Thunder Bench and Sonicsgate Director Jason Reid, Part 2 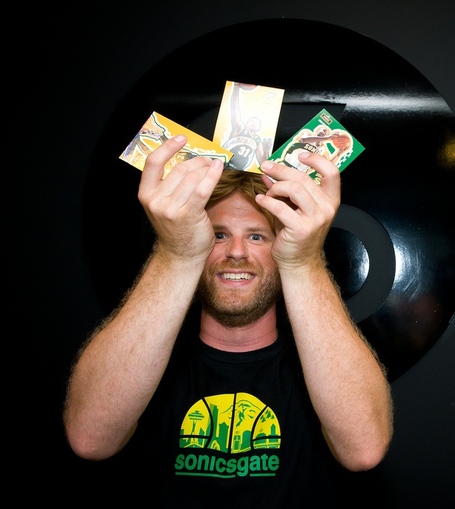 This is Part 2 of a three part interview with Sonicsgate Director Jason Reid. Part 3 will be released tomorrow. (Update: Part 3)

With this part of the interview, I focused a little bit more on what they did specifically at games, and their attitude towards Thunder fans and the Thunder in general. Most importantly, I asked him why the Sonicsgate crew haven't been to Oklahoma City yet. Some of his responses might surprise you.

Welcome to Loud City: The Heat are known for being one of the NBA's most disliked teams. Do you like the Heat in particular, or is it just anybody but the Thunder?

Jason Reid: Unfortunately it is kinda just everyone but the Thunder, or every team but the Thunder. It's....I hate the Spurs. Not to get away from the Heat, but I really hate the Spurs. They have always been my most hated NBA team. I didn't like the Admiral, David Robinson, never liked Tim Duncan, don't like Tony Parker. I do have respect for Ginobili, and I like Stephen Jackson. But, I hate the Spurs. And I was rooting for them in the last round. And that's a hard situation. Once again, when it comes down to looking at a team like Miami where people like to villify LeBron and how the team came together there ….

Well, look at how Clay Bennett took our team out of Seattle and ripped it away from Seattle Sonic fans. You wanna compare the two evils? Well, in our view, supporting Clay Bennett and the franchise is the worst of two evils. So, we prefer the Heat. It's weird, I'm not a huge LeBron fan! I honestly believe that Kevin Durant is much more clutch then LeBron. I believe when NBA History is written that Kevin Durant will probably be a better player. I don't necessarily like the Heat. I was going for the Mavericks last year. But when push comes to shove, if you're gonna compare the two, I gotta root for 'em.

And the other thing is...it's fun to root for a team. We have no team to root for. So I root for my fantasy squad during the year. I root for former Sonics that are playing throughout the league. I'm a Ray Allen fan, [and] of all the local guys that come from Seattle. But we've got our team taken away and have nothing left to root for. So it was fun to be at the game on Tuesday rooting for something. That's what we miss in Seattle, is rooting for a team. And if it has to be the Heat or whoever are playing the Thunder until we get a team back, then that's just how it is!

Below: How Clay Bennett May Have Ordered Their Signs Taken Down, Why He Hasn't Come to Oklahoma City!

JR: We checked with the arena. We made sure that our facepaint was going to be okay before we came in. We told them we'd bring in signs, they inspected our signs when we came into the arena, everything was fine. We were holding them up for most of the first half of the game and then inexplicably the security staff came over and said, "We're going to have to take your signs." And I was like, "Well, can you give us an explanation? Because there's really nothing wrong with these signs." And they said, "Sir, we're just going to have to take your signs." They gave us no explanation, and they said that they would give us the signs back after the game, which they did do. But they never gave us an explanation.

We talked to one of the Miami security guards a few minutes afterwards, and we're like, "What's the deal?" Because we were communicating with them, we told them to let us know if there was any trouble with anything. We're here to not get in the way of the game, we want to participate in the experience, but we don't want to get in the way of the game at all. So, just let us know if there's a problem. He said, "I didn't know, that order came from the top.". He also said that the Oklahoma City Thunder owner was upset. But that's a third party security person. I don't know who exactly decided and made the call to take our signs, but somebody decided to take our signs.

Now, the good part about it was, we had NBA products with us as backups. We had Sonics flags. These are things that the NBA wouldn't be able to take away from us, because we bought them from the NBA. We had backups, but we spent a lot of money not only for this trip, but to get those signs printed. It's kind of disappointing that we were just there being sports fans and they were just trying to censor us, basically.

WTLC: A Thunder fan was kicked out of a Seattle barbershop. Do you think it was the right thing to do, or was it just hateful?

JR: It's just a sensitive situation in Seattle and everyone deals with it in their own way. I mean, people are passionate about this cause. And passionate about rooting against the Thunder because of the way Clay Bennett took the team out of our city. So it's their prerogative, the same way it was the NBA's prerogative to take our signs away last night because they didn't want our message to get out. These guys have a business and they decided that they didn't want to serve somebody who supported the Thunder. And that's their prerogative, to kick them out. I mean, it's a testament to how big of fans they are of bringing back the Sonics.

I don't hold it against anybody who's rooting for the Thunder. In my heart of hearts, I love this team. I love the kind of basketball they play and the way they play it. Once again, it just comes down to if we support the franchise then their owners benefit. After what they did to us and the city of Seattle, it's just impossible for most people in Seattle to root for the Thunder and support them.

WTLC: You said on your Twitter that the Thunder are only selling tickets to people in a Tri-State Area. Don't you have to scalp tickets, anyway? How is that affected?

JR: Well, when you buy them directly through the Thunder website, you can only get them in three states. But of course, if you're on StubHub or whatever, you can order them from anywhere. Everyone's like, "Why don't you come to Oklahoma? Why don't you come to Oklahoma?" And honestly, we'd like to come to Oklahoma City for a game. To just experience how great of fans you guys are and what that experience is in the arena. It's clear that you guys have great fans and are passionate about basketball. I think it'd be fun to be there and experience that and see what it's like up close and personal.

But every time we've tried to do this and look for tickets, we try to get tickets behind the Oklahoma City Thunder bench. That's what we do. Unfortunately, in Oklahoma City, those seats are never available. I'm not sure why. The highest we've ever been able to get is row 10 behind the Thunder bench in town. I don't think that the people who have those seats put them on StubHub or sell them. And so it's a lot easier to get tickets behind the visitor's bench when the Thunder are playing on the road because people want to sit behind the home team bench. Just like they do in Oklahoma City, they wanna sit behind their team. So those tickets are harder to find. But on the road, those tickets are easier to find, and cheaper. So if we wanted to sit behind the Heat bench, it would have been 8 grand, instead of $3,500. It's just a matter of availability. Obviously if any Oklahoma City Thunder fans want to invite me to a game, I'll come down and join you and watch. I'll just be wearing green and gold.

Be sure to come back on Thursday for part 3! (Update: Part 3) And you can find more of Jason and his cause @Sonicsgate on Twitter or at Sonicsgate.com!