Share All sharing options for: NBA Finals Interview with The Sonics Fan Behind the Thunder Bench and Sonicsgate Director Jason Reid, Part 1 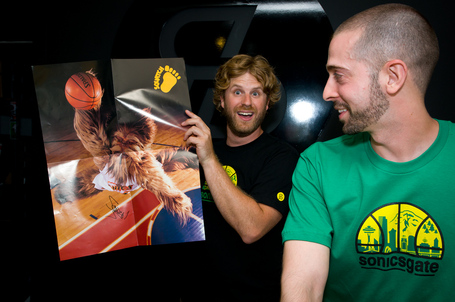 As you might know, I was down in Miami for the NBA Finals, and was able to attend all three of those darned games with press access. During Game 4, there were some Sonics fans sitting behind the bench of the Thunder, jeering them just as they did when the Thunder played Denver during last year's playoff run. I wasn't surprised to find out that those fans were the guys behind Sonicsgate, the 2009 Seattle fan-made documentary showcasing the Sonics quick move from Seattle to Oklahoma City. It's gained a lot of traction through word of mouth, and has aired several times on CNBC. Jason himself has been blasting Twitter during Thunder games, and doing whatever he can to rally support for his cause.

I asked if he would be up for an interview, and he kindly obliged. We met in the lobby of his hotel, which was much nicer then mine. He told me how the only coffee offered there was Starbucks, which wasn't so good for him, because he had to boycott Starbucks for what Howard Schultz did. Immediately, I knew this guy was serious about his cause.

I know some of you might be sick of hearing about the situation with Seattle and all of the trolls running around the internet. But my aim with this interview is to help us better understand each other as fans, give Thunder fans perspective into the actions of the Sonics guys, and help further their cause so we can put an end to this miserable shared history situation.

Anyway, without further ado, here's the interview. It will come in three parts, with the next two parts coming on Wednesday and Thursday. I hope you enjoy!

Welcome to Loud City: So, you're here at the NBA Finals. Do you feel any excitement, or do you just feel sadness for the loss of your team?

Jason Reid: I definitely feel excitement. Like I said, we love NBA basketball. So the opportunity to go to the NBA Finals is a once in a lifetime thing. We were excited at the game. We're just excited to be in this environment, around basketball fans, at the greatest stage of basketball in the world. And so, of course it's exciting! We feel a lot of sadness because we do believe that this should be happening in Seattle and we do believe that our team was taken away from us when we drafted Kevin Durant and Russell Westbrook. But at the same time, we aren't going to let that get in the way of our love of the game and supporting the NBA, because that's what this is all about. Bringing the NBA back to Seattle.

Below: The Sonicsgate Cause, The Best Sonics Games He's Ever Been To, How Much He Paid For His Seats!

WTLC: Can you tell me a little bit more behind the Sonicsgate cause or behind what you're doing?

JR: Yeah, yeah! Well, we released the film in 2009. It's a documentary that chronicles kinda the rise and fall of the Seattle SuperSonics franchise. It's been charging through the internet for the last three years. We released it for free online. We've never tried to make a profit on this. It's always been about preserving the history of the Seattle SuperSonics, educating the public as to what happened, and ultimately providing a place for people to come together around bringing the NBA back to Seattle.

So that's kind of the cause, letting people know about the documentary. There was a lot of misperceptions out there that Seattle didn't support the franchise or the fans didn't support the team, and that couldn't be further from the truth. Our fans supported this team for 41 years through thick and thin. And we hope that our movie dispels some of those untruths that are out there about that that were perpetrated after the team left. Because they like to say, "Well, you didn't support your team!". It's true that our local government completely failed us. They, our elected officials, certainly didn't do what was necessary to get things done. Our mayor settled, in a disgraceful fashion, to allow the Sonics out of the lease two years early and, we fired him! We got him out of office. And now we have a mayor that is fully supportive of bringing the NBA back to Seattle. Our elected officials let us down on a state level too. And of course, Howard Schultz, the CEO of Starbucks, let us down probably more than anyone by allowing the team to get into Clay Bennett's hands.

I think one of the other things is that people think we're only coming down on Clay Bennett. And that's not true. In fact, I'd probably hold our local officials and Howard Schultz more accountable, and I place more blame on them then Clay Bennett and the NBA. We won't support Clay Bennett and the Oklahoma City Thunder franchise as fans as long as he's the owner because of what he did to the citizens of Seattle. But we support Kevin Durant and Russell Westbrook, for instance, on Team USA this Summer. I will support those guys if they aren't, you know. If Clay Bennett isn't winning because of it. (Laughs.)

But the cause is going along really well. We've been showing up at games, as Thunder fans have seen the last few years. At playoff games, in our green and gold. This is not a slight on the Oklahoma City fans at all, it's just us representing that we want to bring the NBA back to our market, that we were wronged by the situation, and that we want the nation and world to realize that we have some of the best basketball fans in the world, and all we want is the NBA to come back to our market so we can support their product.

WTLC: Speaking of the Sonics, what's the best Sonics game you've ever been to?

JR: Oh god! That's a tough question. I wanna say just the entire 2004-2005 playoff run where we had Ray Allen and Rashard Lewis and the team was, you know, expected to be very mediocre that year. Nate McMillan was our coach. I was going through some tough times personally during that season and they pulled off a magical season where they went into the second round of the NBA playoffs and took the Spurs to 6 games. That might not seem like that huge of an accomplishment, but given how bad our teams were in the 2000s and how no one expected that team to do good, that entire playoff run was absolutely incredible. I went to a number of the games, but it's not always about being at the arena for the games as maybe a lot of fans in Oklahoma know. You watch the games on TV. You get 10 of your buddies to come over to your house and you're jumping up and down, cheering. It's about what the NBA brings to your city.

I have fond memories of going to games in the 90s and watching Gary Payton and Shawn Kemp. I went to a couple of playoff games where they played the Jazz, and, I mean, for people who don't say Seattle supported our team, go ahead and YouTube the 96 season and look at the fans in Key Arena. At the time, they were saying the exact same things they're saying about the Oklahoma City Thunder fans about the Seattle fans. We both have great NBA fans, and that's just the reality of the situation. You guys deserve a team, but we do too! Mmm hmm.

WTLC: So, here's the golden question about what happened during Game 4. How much did you pay for your seats?

JR: Yeah, okay. Well, you know, we've been doing this the last couple of years and we've been able to score seats to the playoffs usually for like 500-600 bucks on StubHub. This time, of course, in the NBA Finals, the stakes were raised quite a bit. And I found the perfect seats on StubHub. They were $3,500 each, and we were eyeing 'em for a couple days, and I kinda put us out a feeler on Facebook. Because we are not rich guys. I mean, people might think, "Hey, these guys dropped all this money on the seats." But I put it on a credit card that I opened for this very reason. It's more about the cause. It's like bigger than us in a lot of ways. So when it came time and the ticket link was about to expire, I had no choice but to throw down the hammer and get the tickets. We've probably spent close to 10,000 dollars on this trip between myself and executive producer Colin Baxter coming down here. But you know what? To further the cause, if it helps us get an NBA team back, then that's really nothing to us, because it will all take care of itself in the wash. Like, if I would be getting to sit courtside in Seattle, watching them play the Oklahoma City Thunder in the Western Conference Finals, that's a dream come true and it's worth so much more than 10,000 dollars.

Be sure to come back on Wednesday and Thursday for parts 2 and 3! (Update: Part 2, Part 3) And you can find more of Jason and his cause @Sonicsgate on Twitter or at Sonicsgate.com!