Kevin Durant Will Probably Be on the NBA 2K13 Cover

Share All sharing options for: Kevin Durant Will Probably Be on the NBA 2K13 Cover

For an image of the final cover and further news, click here. 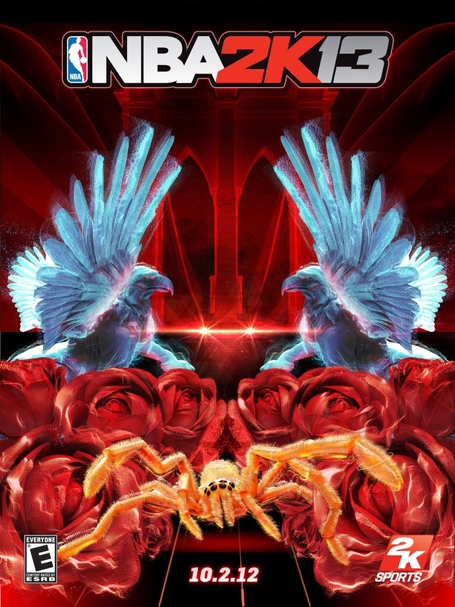 2K Sports just released their teaser cover image for NBA 2K13, with "clues" for the three athletes that will appear on the cover. If you've been even peripherally watching the NBA recently, it's not hard to decipher that the cover will feature Derrick Rose, based on, you know, the roses. Any Thunder fan should know that the tarantula represents the Durantula. The third is a bit harder, but after a minute or so you should be able to guess that the large bird atop this cover is a griffin, representing Blake Griffin.
There's also a Brooklyn bridge in the far background, which could symbolize that this is Brooklyn's first year back in the NBA, or that Deron "Nicknameless" Williams is also on the cover. Maybe the two bee-wing looking things outside the bridge mean that Eric Gordon is on the cover too. Maybe they're a weird NBC logo, and NBC is sponsoring the game. Or....maybe I'm going too far. Regardless, I'm pretty sure Durant is on the cover.
I don't know whether these images will be in the final cover, but if that is so, it will easily be the most ridiculous cover in Sim Sports history. The Video Game sports cover has evolved from what was a simple image of the player in the late 90s and early 2000s to a prolonged reveal event, with stylized, fully painted covers. Nothing has been taken quite to this level before, but it's not the final product, so we'll see.
Also, the decision to go with more than one athlete is one that's probably good for marketing, but it kind of takes away the importance of getting on the cover in the first place. Sure, I hated buying NBA 2K10 because it had Kobe on the cover, but it didn't affect my decision to make a purchase of the game. I mean, I would have never bought the Kevin Durant covered NBA Elite 11, which never came out due to technical issues. Maybe there are some fans who buy basketball games based on who's image is on the cover, but it's more significant if there's not three or four players up there. Especially since 2K has gone with classic covers over the past two years. If you have more than 2, you might as well just put the whole All-Star team up there.