The Sonics Were Stolen, But This Championship Run Belongs to OKC

Share All sharing options for: The Sonics Were Stolen, But This Championship Run Belongs to OKC 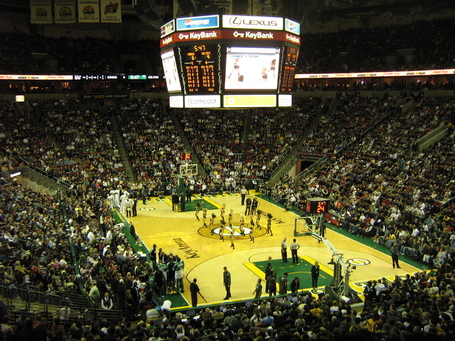 This was a great basketball city, and was totally robbed. But their fans don't deserve any credit for the Thunder's success.
Photo via Bjorn Giesenbauer on Flickr
Yeah, we're talking about THIS again. Four years after the move, Thunder fans are still forced to deal with old ghosts from the Seattle days. The front pages of some news organizations have been littered with stories of old SuperSonics fans that are sad about the loss of their team. Every time you go to a Thunder playoff game, home or away, there's always someone wearing green and yellow. And the guys over at Sonicsgate have been constantly working to send messages of warning to other cities about the NBA stealing their team away, while also promoting the cause of getting a NBA team back in Seattle.
The Thunder's successful run hasn't really doused the flames. Rather, it's fueled the fire. Seattle fans are only more outraged that they lost a potential championship run, and they're getting more press than ever.
And, before I get a bunch of hate from Seattleites, let's make one thing clear. The Thunder were straight up stolen. And most Thunder fans are still in denial about it. All of the mentions of the move in local media I've seen during this playoff run have been blind about the issue, dismissing it as Seattle being unable to meet the requirements of a new arena. When, as most rational people know, Clay Bennett pretty much wanted Seattle to refuse the offer. The arena was proposed to be built in an unreasonable part of town, and required the city to foot way too much of the bill.
But the point of this post isn't to blame Clay Bennett, or guilt Oklahomans for supporting their team. All of this is old news, and has been discussed to death.
The point is, this championship run belongs to nobody but Oklahoma City. The team has been in the city for four years, and only two players have ever even donned a Sonics uniform. It's not as if Oklahoma City stole a team that was ready to go on a championship run. The roster was riddled with journeymen and draft busts, while Kevin Durant was infamous for throwing up bricks. The team's foundation was built and grown in Oklahoma City. Seattle has about as much to do with the Thunder's 2012 season as Cleveland had to do with the Baltimore Ravens 2000 Super Bowl run.
On top of that, I don't understand what rooting against the Thunder is going to accomplish. If the Thunder lose against the Heat, it's not going to be considered a big victory for the city of Seattle. In fact, I'd think they would get more coverage and sympathy if the Thunder actually won the title. And the Thunder symbolize so much more than the loss of one city. Is everybody who cheers for the Portland Trail Blazers a huge Microsoft supporter? Out of all crowds in the NBA, I'd bet they use more Macs then anyone else. Does everybody who's a Mavericks supporter watch a bunch of HDNet? Did Warriors supporters love Chris Cohan? Do Clippers supporters love Donald Sterling?
The simple fact is, despite the owner sitting at the top of a crystal palace and making millions of dollars, sports teams are much more than what goes on behind closed doors in the front office. Whether I support what the front office does doesn't reflect whether I support the team or not. The team is a reflection of the players and the city you live in. They work for the owners, but the owners are merely the guys who provide the setting. The players are the ones who provide the show.
If the Thunder were simply a corporation, I wouldn't necessarily throw my support behind them. But the Thunder are a awesome basketball team, and Oklahoma City is an awesome city. So I'll support them to the end, just like Sonics fans are doing for their old team right now. My best goes out to them, but anybody who thinks this potential championship ring belongs to Seattle needs to take a reality check.